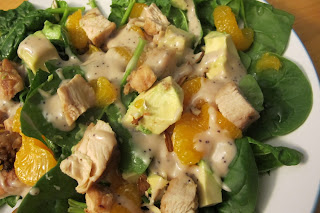 My attempts at being healthy are inconsistent at best.  One week I eat salads for lunch and the week before I eat Chinese food with a mound of white rice for lunch. 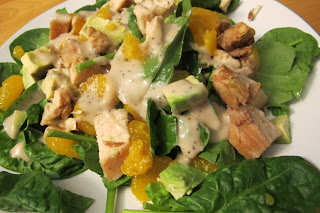 I also seem unable to break my habit of baking desserts.  Even though I'm trying to be healthier, I baked cooked last Sunday.  I also bought four boxes of Girl Scout cookies from a coworker.  I guess I really bought them from my coworker's daughter, but I have actually never met her. 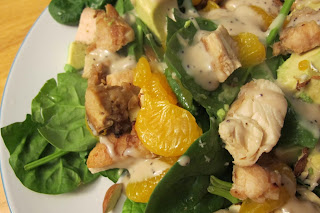 Speaking of Girl Scout cookies, I bought a new kind that is S'mores inspired.  It seems like we are all a little obsessed with S'mores.  I haven't tried it yet, but I've heard they are delicious. 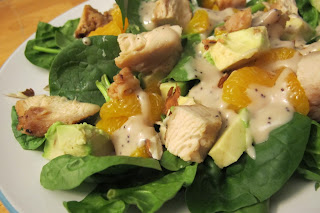 Even though my attempts at being healthy are hit and miss, this salad was delicious.  I have made some tasty salads on my blog, including a shrimp cobb salad; a butternut squash salad with sausage, apples, and Brussel sprouts; a corn, avocado and mango salad; a Ruben Brussel sprout salad; and a tropical fruit salad.

Other delicious salads that I have made are a creamy carrot salad with raisins; tomato and peach salad with basil; carrot, pineapple, and coconut salad; and Brussels sprout slaw with dried berries and almonds. 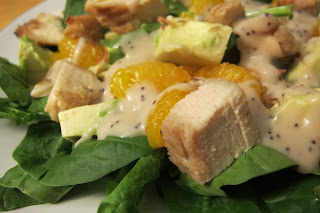 I didn't have an official recipe for this.  I think most salads are pretty self explanatory and don't require too much direction. 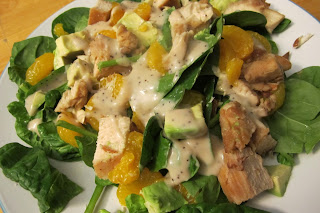 For each salad, I used half a avocado, 1/3 cup mandarin oranges, 1/2 cup cooked chicken breast, 3 scallions, 3 to 4 cups spinach, 1/8 cup sliced almonds, and dressing.  I used a caramelized onion and poppy seed dressing.  I didn't make it myself, but it was delicious. 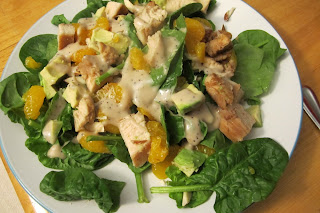 I mounded the clean spinach on a plate.  I diced the avocado and added on top of the spinach. 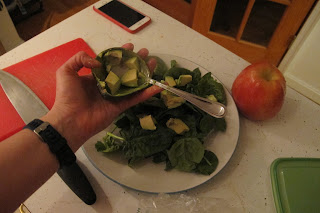 I added the mandarin oranges and slivered almonds.  I didn't actually add an apple to the salad even though there is an apple in every picture.

I added the sliced chicken and thinly sliced scallions.  Last of all, I drizzled on some dressing.

This was a fantastic salad.  It was colorful and pretty too.

The avocados were creamy and smooth, and the mandarin oranges were bright and sweet.  The scallions were aromatic. 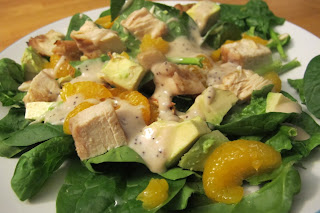 The scallions and almonds provided a little crunch.  I really enjoyed the salad dressing as well.  It was sweet and savory.   It has a pronounced canalized onion flavor.

Overall, the salad was bright, fresh, and flavorful. 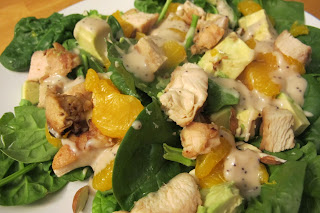 It was delectable and appetizing. 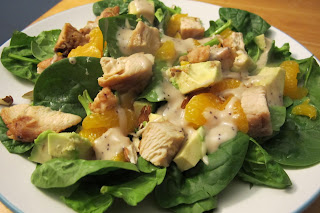