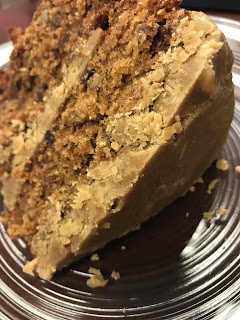 Several years ago for Christmas I got a cookbook called American Cakes.  It has been a very fun book.  The book is organized and grouped chronologically.  The author writes about the history and back ground of each recipe, and then shares a recipe for each cake using measurements and techniques modern readers can replicate. 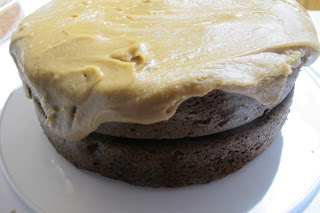 I have baked a number of cakes from this cookbook.  I baked the tunnel of fudge cake for my last birthday.  For by birthday two years ago, I made the hummingbird cake.  The first cake I made was the cherry upside-down cake.  I made it with my mother at Christmas just after receiving the cookbook. 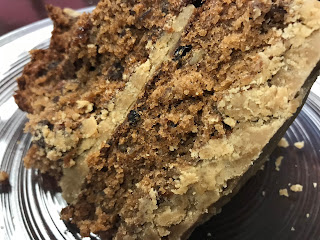 I just heard a podcast with the same author that she has written another cookbook on American cookies.  I may ask to receive this cookbook for Christmas this year. 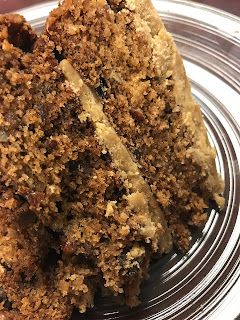 She is a fun writer, and I like reading about the history of the cakes I bake.  This jam cake is from the 1800 to 1869 section.  This cake was first baked just after the civil war.  The caramel frosting is a traditional frosting from Kentucky and Tennessee. 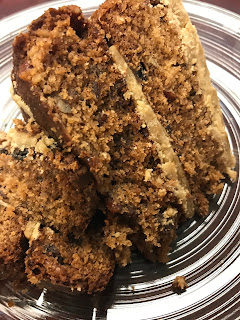 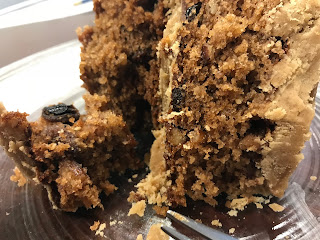 The ingredients for the frosting are 1/2 cup butter, 1 1/2 cup brown sugar, 1/3 cup cream, 1 teaspoon vanilla extract, pinch of salt, and 1 1/2 cups confectioners' sugar.  As you can tell, it is a pretty decadent cake. 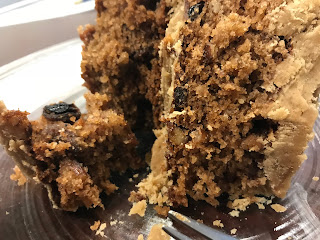 I began making the cake.  I baked the chopped pecans on a baking sheet for about five minutes at the oven preheated to 350 degrees.  I also lined the bottoms two nine inch cake pans with parchment.  I then greased and floured the pans.  Then I placed the butter and sugar into a mixer and creamed them together for three minutes.

I set aside a tablespoon of flour.  I but the remaining flour into another bowl.  I added in the cinnamon, nutmeg, allspice, ginger, and salt.  I whisked all of these dry ingredients together. 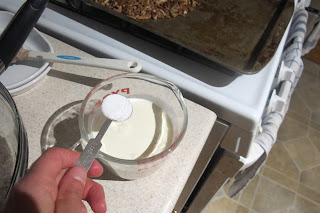 I added the toasted pecans and raising together.  I tossed and coated the nuts and raisins with the remaining tablespoon of flour.

I mixed the pecans and raisins into the cake batter.  I poured the batter evenly between the two cake pans.  I baked the cakes for 38 to 42 minutes at 350 degrees.   Once fully cooked, I let the cakes cool for ten minutes.  I then ran a knife around the edges of the pan, inverted the pans onto a cooling rack, and gave the pans a little shake to remove the cakes from the pan.  I let the cakes cool completely before frosting.

To make the frosting, I put the butter, brown sugar, cream, vanilla, and salt into a pot over medium heat.  I stirred and brought this to a boil.  I was supposed to let this boil for two minutes, but I think I over cooked it.  I should have monitored my timing better.

After boiling the frosting for two minutes,  I mixed in the powdered sugar. 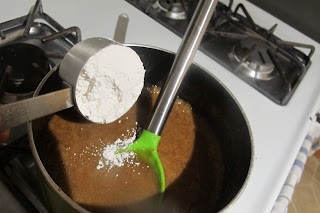 I then added the rest of the caramel frosting.  I think my frosting was too firm and overcooked.  It was already thick.  It didn't flow off the the sides of the cake well.  I had to kind of force it, and it didn't look very pretty.

Despite the overcooked frosting, this cake was divine. 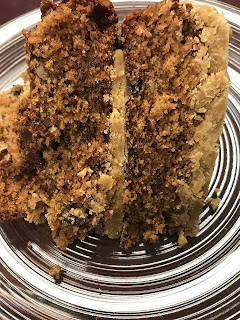 The cake was flavorful and fully of warm inviting spices.  It was very aromatic.  The flavor was on point. 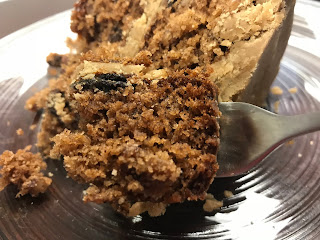 The texture was tender and moist.  It was backed full of chewy raisins and crunchy pecans. 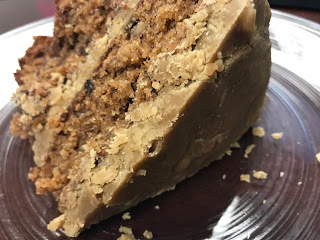 The taste and texture of the cake left nothing to be desired.  It is a standout recipe. 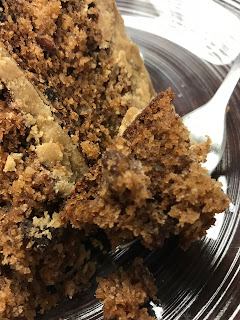 The frosting was sweet and caramelized.  It was buttery and crunchy.  If you want the frosting to be softer you should cook it less but also eat it soon after making the frosting.  I think with time, the frosting would have become crunchy even if I had looked it less. 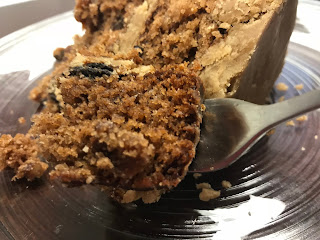 I didn't mind the crunchy frosting.  It added some texture.  It was very sweet, but the frosting layer wasn't thick.  I also have an insatiable sweet tooth. 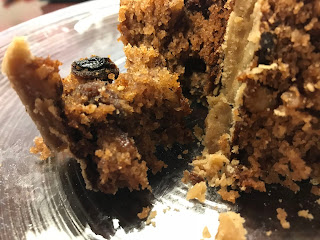 People who don't have my ability to eat copious amounts of sweet baked goods and chocolate may find the frosting too sweet, but I enjoyed it. 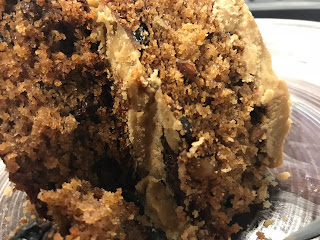 This was a phenomenal recipe.  The cake was scrumptious.  It is definitely worth making more than once.  I give it two thumbs up! 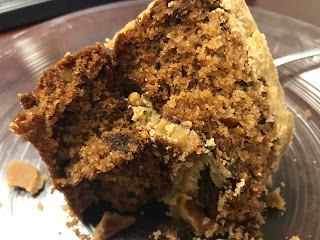