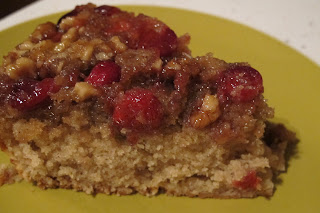 In the past few years, I have become a chocolate snob.  I would occasionally buy Snickers bar or package of peanut butter M & Ms when I was younger.

I now find myself buying artisanal, small batch chocolate like I'm a high roller.  I'm current eating a maple and coconut dark chocolate.  The beans were grown in Belize.   That may sound ridiculous, but  the chocolate is delicious. 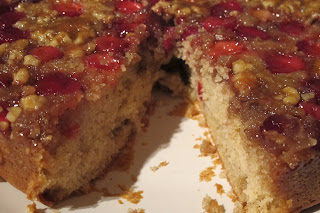 I don't like eating at restaurant chains, I peruse through yelp reviews about restaurants, and I spend way too much on chocolate.  I'm slowly developing into a food snob.  I guess there are bigger character flaws.

Wikipedia's coffee cake entry is pretty sparse.  It points out that coffee cake doesn't contain coffee, but is meant to be eaten with coffee or tea.  That's useful information.

Another website said that the recipes for coffee cake from colonial America are similar to modern recipes. 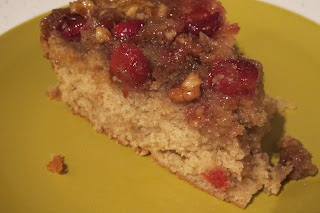 This recipe came from allrecipes.com.  Unlike some coffee cakes, it doesn't have a streusel layer or a crumb topping.  It does have a caramelized top that's positively mouthwatering.  It has positive reviews, and I know why: it's a keeper!  Instead of using pecans, I used walnuts.

I started by making the caramelized sugar top, which is the bottom while it's baking.  I put the brown sugar and a third of a cup of the butter into a saucepan.  I brought it up to a boil. 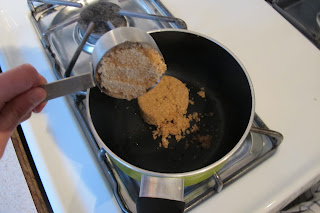 I prepared the cake while the brown sugar and butter came to a boil.  I whisked together the flour, baking powder, baking soda, cinnamon, and salt.

In another bowl, I creamed together the remaining half a cup of butter and white sugar. 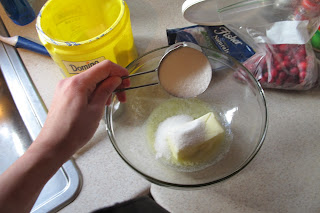 I stirred in the vanilla.  I used fancy vanilla paste.  It's cool because it has vanilla seeds.  I'm not sure how the taste compares to regular extract.

Once the brown sugar and butter were boiling,  I poured it into a springform pan.  I greased the pan and played parchment paper on the bottom of the pan.  I also covered the outside of the pan with foil. It isn't baked in a water bath so I'm not sure why this step is necessary.  The recipe instructed me to do it.

I sprinkled the cranberries and walnuts evenly cover the liquid brown sugar and butter.

I poured the batter gently over the sugar, cranberries, and nuts.  I didn't want to jostle the beautiful bottom too much.

I let the cake cool for ten minutes in the pan before loosening the sides of the pan and inverting the cake onto a plate.

The recipe says to eat it warm.  I ate a slice warm and a slice cold.  The recipe is right.  This cake should be eaten warm.

This was a toothsome cake.  The topping was caramelized and gooey.  The walnuts were crunchy and hearty.

The cake texture was tender and moist.  It was flavorful and fragrant.  The spices were festive.

Not only was the cake comforting, homey, and scrumptious, it was beautiful too.  The cake was elegant and dramatic.  It had a sophisticated presentation, even though it was simple to make.

Love that you made a cranberry upside-down cake! Such a great idea and I bet it's delicious too!

It was delicious Kelly!