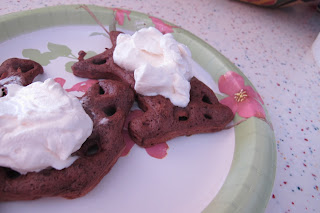 Happy Martin Luther King Jr. Day!  I'm not sure how I should celebrate.  Service would probably be an appropriate way to commemorate his birth.  Unfortunately, I did not serve anyone.

My parents have a great waffle iron that makes waffles in the form of farm animals.  It makes a cow, pig, chicken, and barn.  I like the barn because it's the biggest, but the chicken is my favorite shape.

People have been eating waffles for a long time.  In the 9th or 10th century, people used wafer irons to depict biblical scenes on their communion wafers.  The irons were called oublies.  They craftsmen were skilled laborers who formed their own guilds. 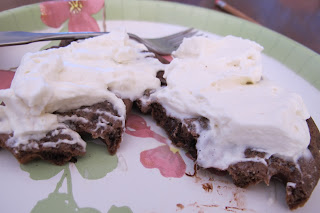 The first known waffle recipe was written in the late 14th century.  The anonymous author wrote a manuscript of instruction to his young wife.  The manuscript is entitled Le Ménagier de Paris.  The manuscript gives young women advise on how to be proper wives.  It sounds enlightening...

In the 15th century, irons for waffles and not wafers emerged.  During the 18th century, sugar prices fell due to increased production in the Caribbean.   Waffle recipes became sweeter and more decadent as a result of the cheaper sugar.  It was during the 18th century that the term waffle was first used in English.  In the 1900s, people began making waffles in their homes with the advent of electric waffle makers. 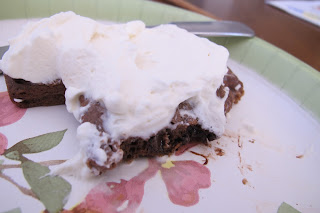 There are a myriad of waffle types.  There are Brussels waffles, lèige waffles, Flemish waffles, Bergische waffles, pandan waffles, and Stroopwafels, just to name a few.  Phew! There is much more I could write, but I think I've already gone overboard! 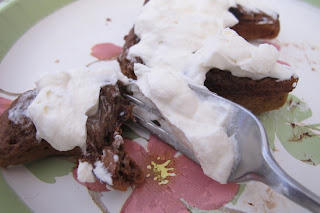 In another bowl, I whisked together the eggs, melted butter, vanilla, and buttermilk. 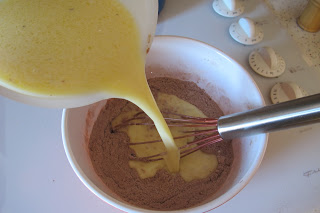 I sittred in the chocolate chips. 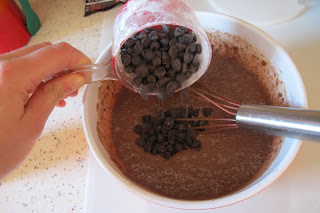 I closed the waffle iron and let it cook until the iron indicated the waffles were complete.  The waffles came out easily from the iron. 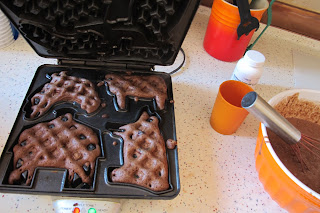 We ate our waffles with sweetened whipped cream.  It is a sweet recipe, so whip cream was good.  I think these would be especially decadent with ice-cream and chocolate sauce.

These were a delectable waffles.  The chocolate flavor was rich and deep.  The waffles were soft and tender.

The chocolate chips became smooth and creamy.  They made a decadent and mouth watering breakfast.

I would have preferred crispier edges, but I think I could have achieved that if I left them in the iron for longer.

Everyone in my family enjoyed these.  You can't eat too much chocolate, so it's good to start the day with a large dose.