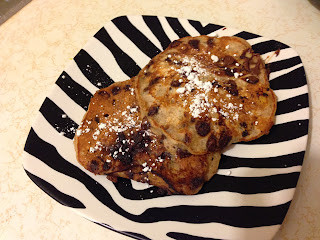 A few weeks ago a co-worker was going to throw an overly ripe banana away. Instead, I took it home and put it in my freezer. I ended up making my pistachio and date banana bread with her kind contribution. I apparently created a name for myself as a brown banana hoarder because last week she gave me two more bananas. 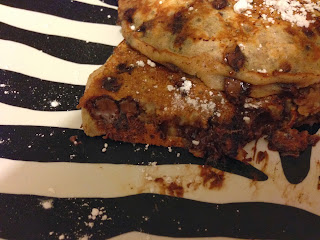 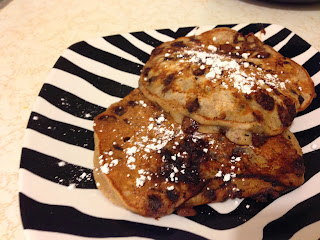 I made some minor adjustments to a banana pancake recipe from Allrecipies, and they turned out great, if I do say so myself. I added nutmeg, cinnamon, vanilla, and chocolate chips to the original recipe. I also swapped the white sugar for brown sugar.

I combined the flour, brown sugar, baking powder, salt, cinnamon and nutmeg. Before making this recipe, I had thrown out my baking powder because it had passed its expiration date. On the way home from work, I went to TWO grocery stores looking for baking powder. Neither of them had any. I deserve an award for my perseverance. 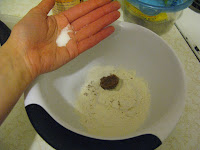 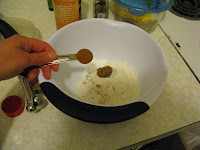 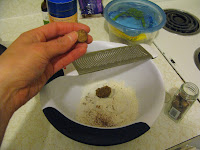 Anyway, I mashed the bananas. They were pretty mushy already because they had been frozen. I added the egg, milk, oil, and vanilla to the bananas. I stirred. 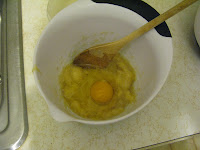 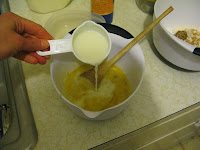 I poured the liquids into the dry ingredients. 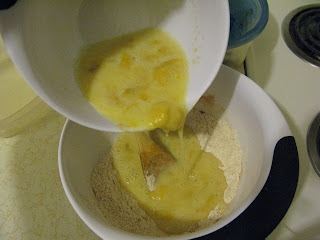 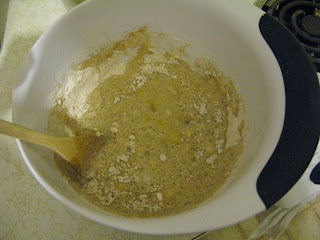 Before the flour streaks had disappeared, I added the chips. Sometimes I call them chips because I like pet names. I should get in the habit of calling them little morsels of chocolaty goodness. 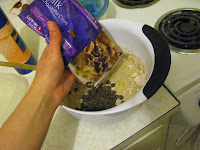 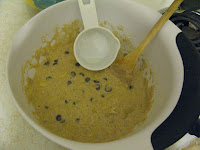 I added a sliver of butter to a hot skillet. Once it was melted, I added a little less than half a cup of the batter to the pan. The recipe only calls for a fourth of a cup, but I don’t have time for that. 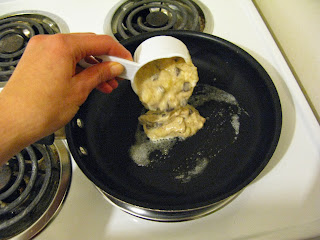 When the edges firm up and little air bubbles start forming near the middle of the cake, flip it. Flip it with care. I try to show love towards my food; it sustains me. 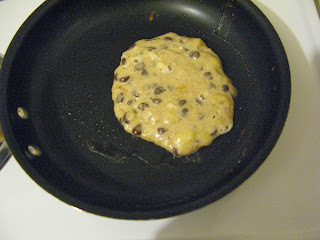 I browned the other side. I don’t have any helpful advice to know when it’s done. 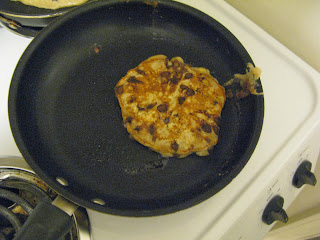 I then proceeded to eat these gems with a light sprinkling of powdered sugar. I thought they were sweet enough without syrup, but you can always guild the lily. If you are looking for a caloric-fest, these would be fantastic with peanut butter and syrup. I would have done it myself, but alas, the idea came after the pancakes were gone. 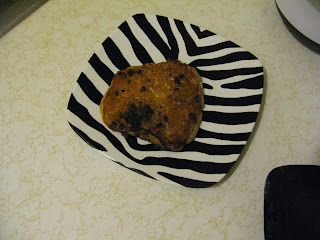 Brown banana hoarder? Hahaha that has to be me too ;--) I have lots of black bananas sitting on my fridge, waiting for them to become a smoothie! Although, now that I think about it, these banana pancakes would be a much better way to use them all up. They look delish! x

I freeze browning bananas too but I've most always used them in muffins. I made pancakes once but never thought to use choc chips. Argh! Next time!

These look delicious, Laura. My hubby will love them. I just threw away a couple of very brown bananas. Now I have a reason to keep them. :)

Oh, what a heavenly breakfast! I love bananas and chocolate together...

Banana pancakes are such a great way to start the day. I love that you added chocolate to them!

Thanks Consuelo and Colette! This is a great use of brown bananas.

The chocolate chips really are a great addition to these pancakes! Of course, there are few foods that wouldn't be improved by chocolate :)

These look so amazing Laura! I love banana and chocolate together so I know these pancakes are going to be fantastic - yum!

Thanks Christina and Trish!