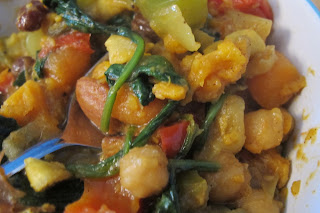 Happy Easter!  I have wanted to go to Spain for many years.  I think the desire started in a college Spanish class.  In class we read a short Spanish novel, and I think it was called La Peregrina.  I googled this title but didn't find a match, so I may be remembering incorrectly.

The story was set in Spain, and I believe the pilgrim was walking el Camino de Santiago.  This is a path in Spain that leads to a shrine in Galicia for the Apostle James. 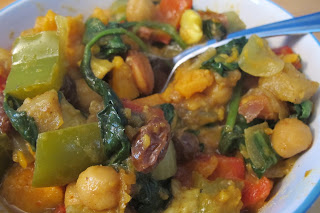 I have started looking at places I want to go in Spain.  One idea is to go to Andalusia in southern Spain for 6 or 7 days and spend a few days in Morocco too.

This entire spill is to say that I would go to Marrakesh if I go to Morocco.  Marrakesh is the fourth largest city in Morocco.  The city was founded in 1062.  In the 12th century, craftsmen from the Andalusia region help build some of palaces in Marrakesh.  The mosques from this period were influenced by the Andalusian region. 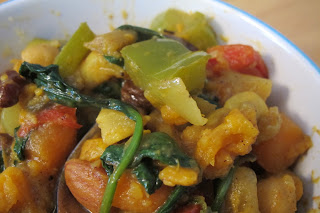 The origin of the name is probably from a Berber word meaning "Land of God."  Morocco's seven patron saints are buried in Marrakesh.  In 1912, Morocco became a French protectorate.  They gained their independence in 1956. 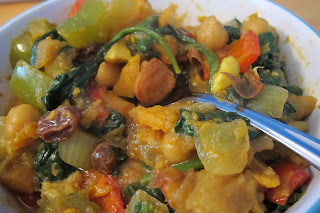 I'm not confident this is an authentic Moroccan dish.  It may just be Moroccan inspired.  Regardless, it was delicious.  I have made two other Moroccan dish, a chicken tagine and a vegetable tagine.  All  these dishes were excellent. 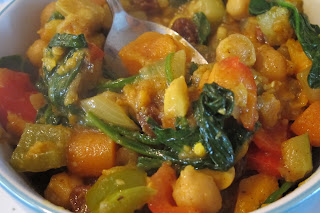 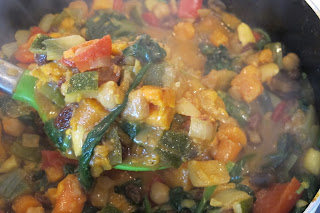 In a large pot, I places the cubed sweet potato and eggplant.  I added the chopped peppers, carrots, and onion.  I added three tablespoons of the olive oil.  I cooked this over medium-high heat for around 6 minutes.  I stirred regularly.

In another pot, I added the remaining 3 tablespoon of olive oil.  I added the garlic, turmeric, curry powder, cinnamon, salt, and cayenne pepper.  I sautéed these spices for 3 minutes over medium heat.

I added the spice mixture into the pot with the vegetables.  I also added the garbanzo beans, almonds, zucchini, raisins, and orange juice.  I stirred and let this simmer covered for 20 minutes.  I stirred occasionally.

I added the spinach.  I seemed like a mountain of spinach but it wilts down.

After adding the spinach, I let the curry simmer for an additional five minutes.

The flavors were warm, alluring, and inviting.  The curry was bright and colorful. 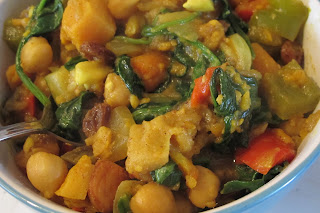 The vegetables were tender and soft.  The flavors fused with one another.  The spices were exotic and appealing. 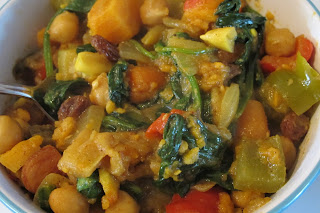 The raisins softened and plumped in the curry.  The almonds were crunchy and nutty.  The vegetables were mellow.

Overall, it was a very flavorful and savory dish. 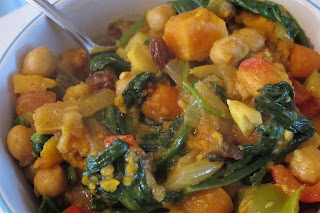 This was a scrumptious dish.  It was healthy and nourishing but still delicious.  I'm glade I added the extra raisins and almonds too.  The gave the dish most texture and interest. 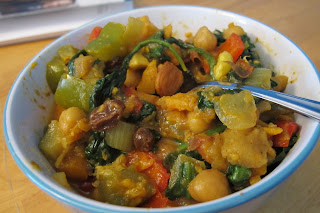