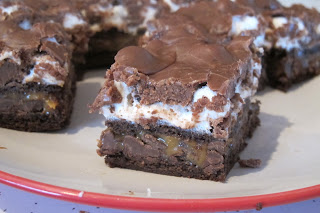 Chocolate is made from cacao  Unprocessed cacao is naturally quite bitter.  They are fermented to make them more palatable.  The seeds are then dried and roasted.  The shells are moved. 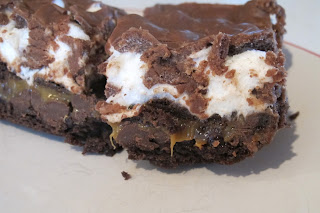 The shells are made into cocoa nibs.  The nibs are then ground into cocoa mass, which is pure, unadulterated chocolate.  The cocoa mass is liquified.  The liquid is called chocolate liquor.

Chocolate liquor is processed into either cocoa solids or cocoa butter.  The chocolate that we eat is a combination of cocoa solids, cocoa butter, and sugar.  Milk chocolate also includes milk powder or condensed milk. 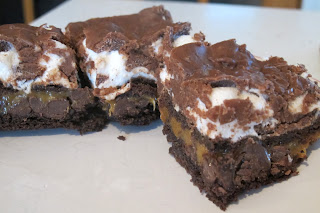 White chocolate contains cocoa butter, sugar, and milk, but no cocoa solids.  I'm not a huge fan of white chocolate. 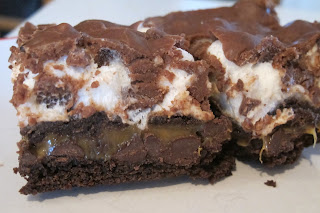 Chocolate has been prepared for a long time.  A Olmec chocolate making vessel was found in Veracruz, Mexico that dates back to 1750 BC.  In Chiapas, Mexico, archeologists found evidence of chocolate making dating back to 1900 BC. 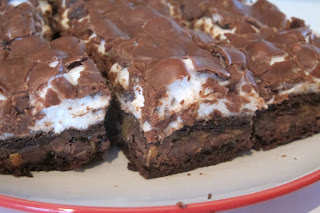 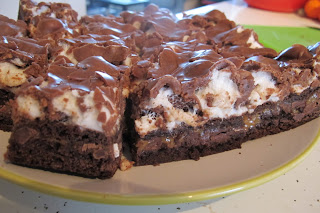 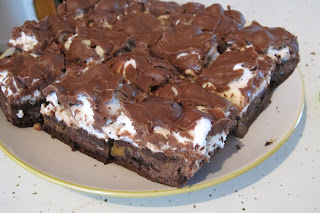 I combined the melted butter, cake mix, and two thirds cup of the evaporated milk together.

I spread half of the batter into a 13 by 9 inch baking pan lined with parchment paper.  I baked the bottom layer for 15 minutes at 350 degrees. 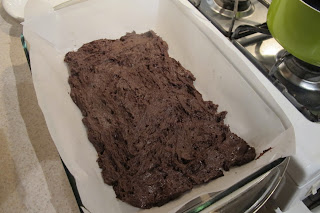 While this baked, I added the unwrapped caramels and remaining 1/3 cup of evaporated milk into a saucepan.  I stirred and melted the caramels over medium heat.

After 15 minutes of baking, I removed the bottom layer of the brownies and sprinkled on the chocolate chips. 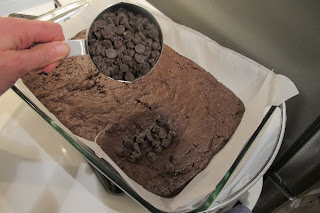 I poured the melted caramel evenly over the chocolate chips.

I scooped tablespoons of the remaining brownie batter evenly over the caramel layer.  I baked the brownies for an additional 25 minutes at 350 degrees. 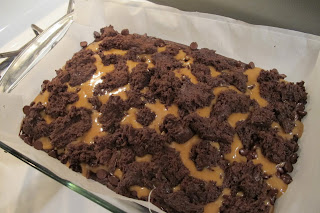 I prepared the frosting while the brownies baked.  I melted the butter, cocoa powder, and milk together over medium heat.  I brought the mixture to a boil.

I removed the frosting from the burner once it started to bubble.  I added the powdered sugar and vanilla.  I stirred well and set it aside.

After 25 minutes of baking, I added the marshmallows on top of the brownies.  I baked the brownies for another two to three minutes.

I removed the marshmallow encased brownies from the oven and immediately poured on the frosting.

The frosting seeps into marshmallow layers nooks and crannies. 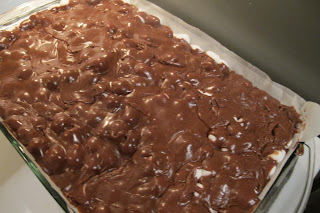 I let the brownies cool completely before cutting them into manageable sized bars.  In fact, they cooled overnight in my refrigerator.

I removed the brownies from the pan and peeled off the parchment paper.  I cut them into about 20 bars.  These babies are rich, so a small brownie will cure your chocolate cravings. 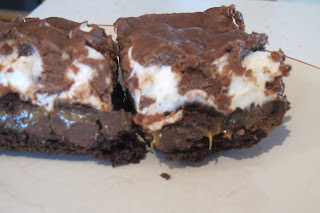 The marshmallows are pillowy and soft.  The chocolate glaze is thick and sweet.

These were luscious and over the top. 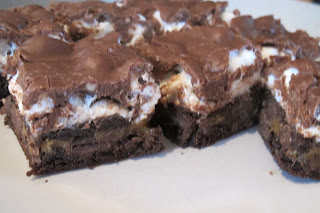 These were a delectable and mouthwatering brownies.  They were very sweet and rich.  Just a small brownie packed a strong, chocolaty punch.

Eat these with a glass of milk and be prepared to be satisfied!  I give these two enthusiastic thumbs up! 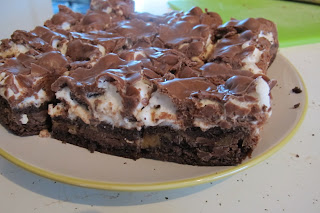 Those brownies look like the perfect birthday treat to celebrate with. I hope you had a fabulous day!

I did have a great day! Thanks!