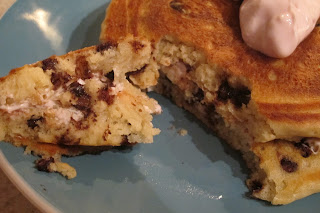 I'm back in the pancake game with a vengeance.  There seems to be no end to the possible pancake variations.  I have posted apple, pecan, and raisin pancakes, chocolate blueberry pancakes, dried cherry and almond chocolate pancakes, coconut banana pancakes, and pumpkin pancakes with chocolate chip cookies.

Most of the pancake recipes I have posted were been fantastic with two exceptions.  The sweet potato pancakes and cake batter pancakes left lots to be desired.  They both had eggy and dense textures.  I made both as directed so I'm faulting the recipes. 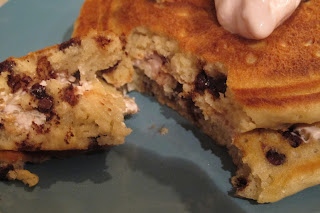 I had left over sour-cream from the cranberry upside-down cake I posted earlier.  I clearly have a soft spot for pancakes, and so I googled sour-cream pancakes.  This recipe from epicurious seems promising, so I gave it a try.

Sour cream comes from fermenting regular cream with bacteria.  The fermenting process creates lactic acid.  This processes is called souring, and thus it is called sour cream.  It traditionally has about 20% buttercream. 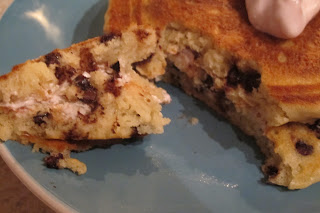 Sour cream is different than Central America's crema.  Crema is less sour and higher in fat. 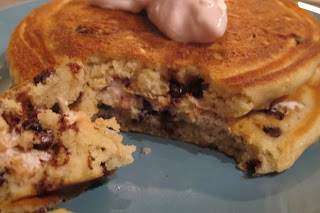 I added the four, sugar, baking soda, and salt to a bowl.  I whisked these ingredients together.

In another bowl, I added the melted butter, sour cream, milk, and egg.

I whisked the wet ingredients together. 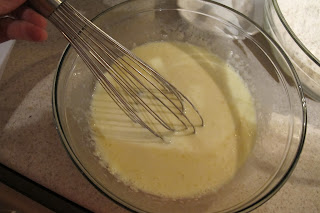 I poured the wet ingredients to the flour mixture.  I added the mini chocolate chips and whisked the batter together.

I greased a skillet and placed it over medium -high heat.  I scooped around a fourth to a third of a cup of the batter into the warm pan. 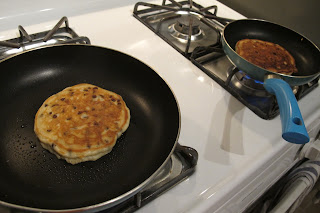 I have started eating my pancakes with greek yogurt.  It adds a little sweetness and dairy and seems healthier the syrup or honey.

The pancakes were tender and moist.  The outside was golden brown.

The pancakes had a little tang from the sour cream but they weren't sour.  The taste was simple but delicious.

I was pleased with these pancakes.  The texture was fantastic.  The taste was simple, homey, and satisfying.

These pancakes look so fluffy and amazing, Laura!

I've been counting down the days to Fat Tuesday so I can go pancake crazy! These will be a great addition ;)