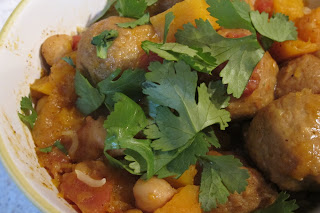 This has been a weird work week.  On Monday and Tuesday, I teleworked because there was over two feet of snow.  On Wednesday and Thursday there was a three hour delay.  That means people arrived three hours after their regularly scheduled arrival time.

On Friday, I had a meeting all day.  The meeting started an hour after I usually start working.  This whole week I have gotten up at the same time I usually do but have had at least an hour extra to do things. 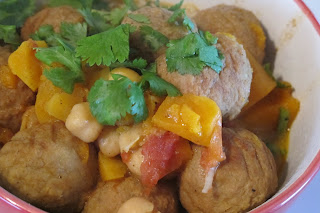 One morning I read in bed for an hour.  I worked out in the morning on a couple of days.  On Wednesday, I wrote a blog post about sour-cream pancakes.

I have really enjoyed the extra time.  Next week I'm going to have to adjust to rushing to get to work on time. 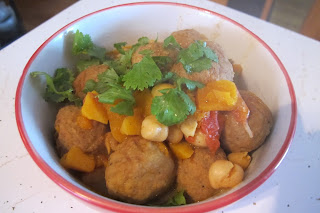 A couple of years ago, my parents came me a cookbook entitled Nigella Express.  I rediscovered it over Christmas and have made a few recipes from it.  The macaroni and cheese recipe I posted early this month came from Nigella Express. 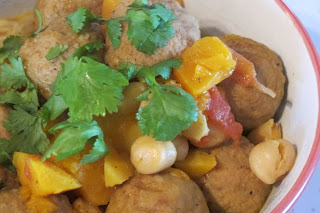 I added the oil and curry paste to a large pan.  I heated it over medium heat and cooked the curry paste until it was sizzling and fragrant.

I added the meatballs and stirred until they were coated with the oil and curry paste.

I added the ground ginger and cinnamon.  I fried the meatballs for a few minutes while stirring.

I added the coconut milk, chopped tomatoes, and drained chickpeas.

I added the diced butternut squash, chicken stock, and honey.

I brought the sauce up to a boil.  I simmered the meatballs for 20 minutes.

I served the meatballs over rice and garnished with roughly chopped cilantro.

This is a hard recipe to categorize.  It had many of the same ingredients as curry, but the meatballs were Italian.  It was a delicious and multicultural dish.

The flavors were outstanding.  It was savory and aromatic.  The meatballs were succulent and moist.

The vegetables were tender and colorful.  The beans were creamy, and the butternut squash was smooth.

The cilantro was bright and fresh.  The flavors were exotic, but the meatballs were familiar and comforting.

This dish was scrumptious.  It was one of the tastiest things I have eaten in a while.  It left northing to be desired.

Over 2 feet of snow? That's a ton! These meatballs sound like such a great dinner for winter!