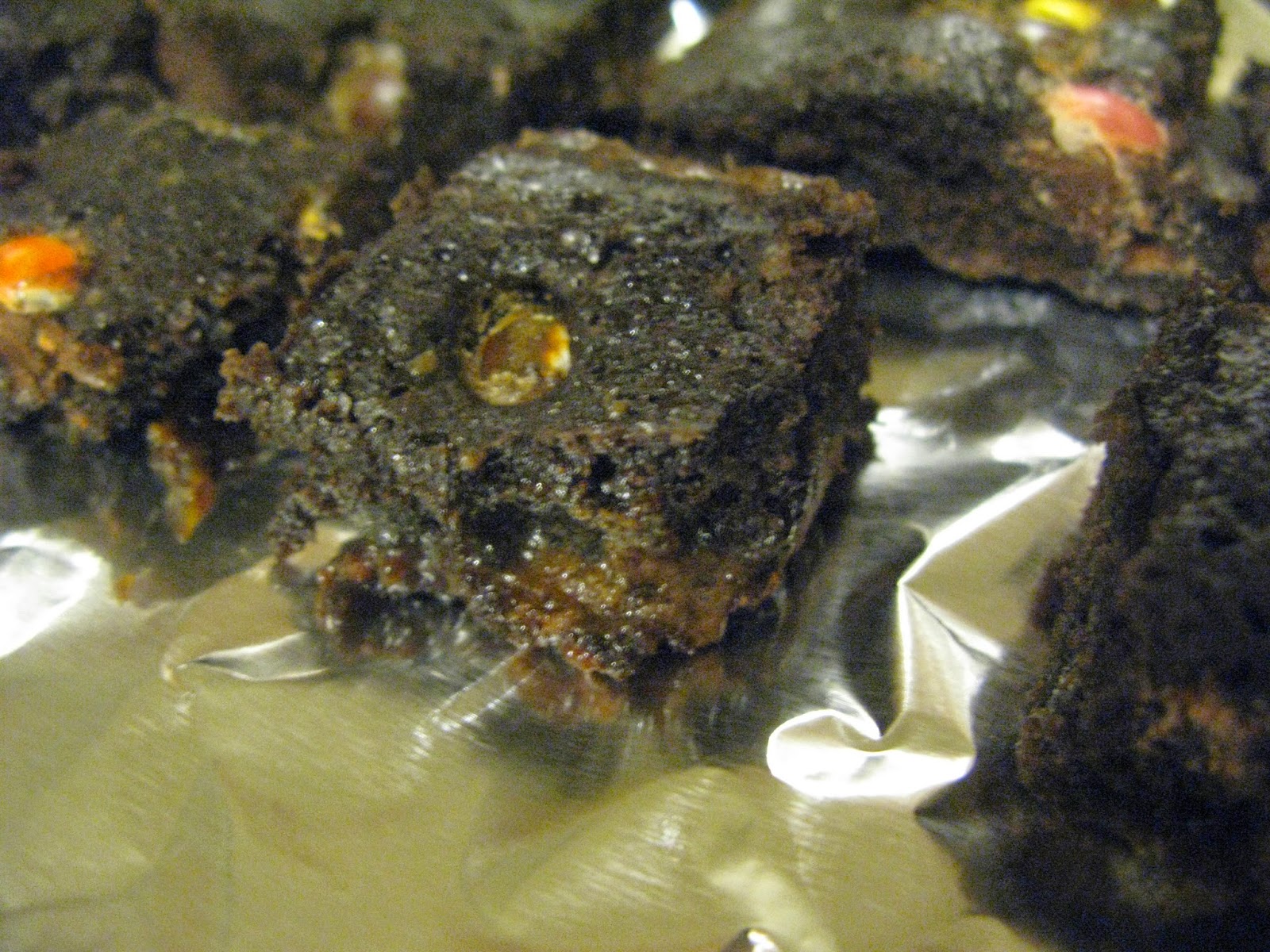 There is an age range in which dressing up for Halloween is not cool.  It's just after you are able to go trick or treating yourself. 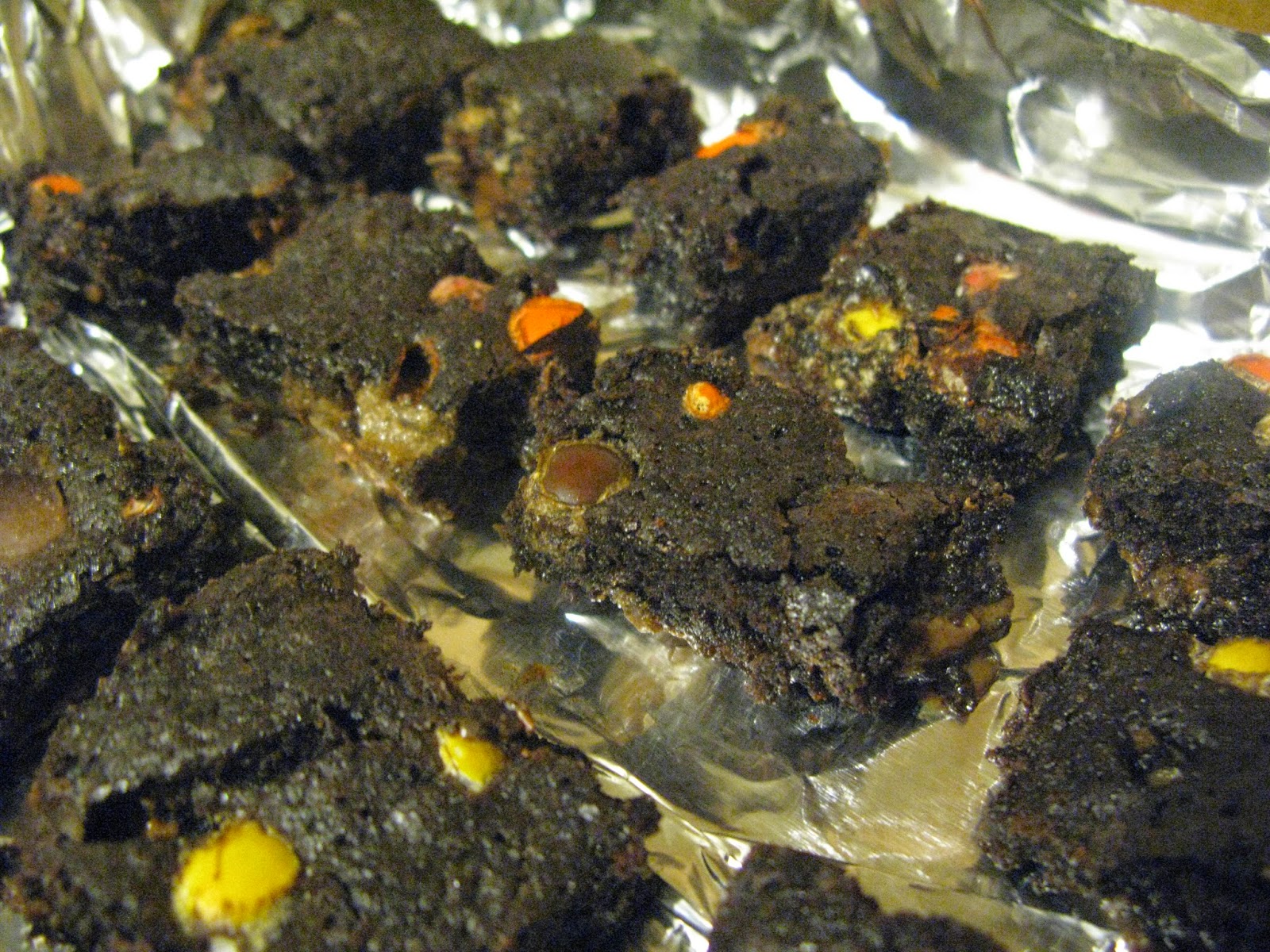 I didn't dress up for Halloween at that time because I didn't want anyone to confuse me for someone young enough to go trick or treating. 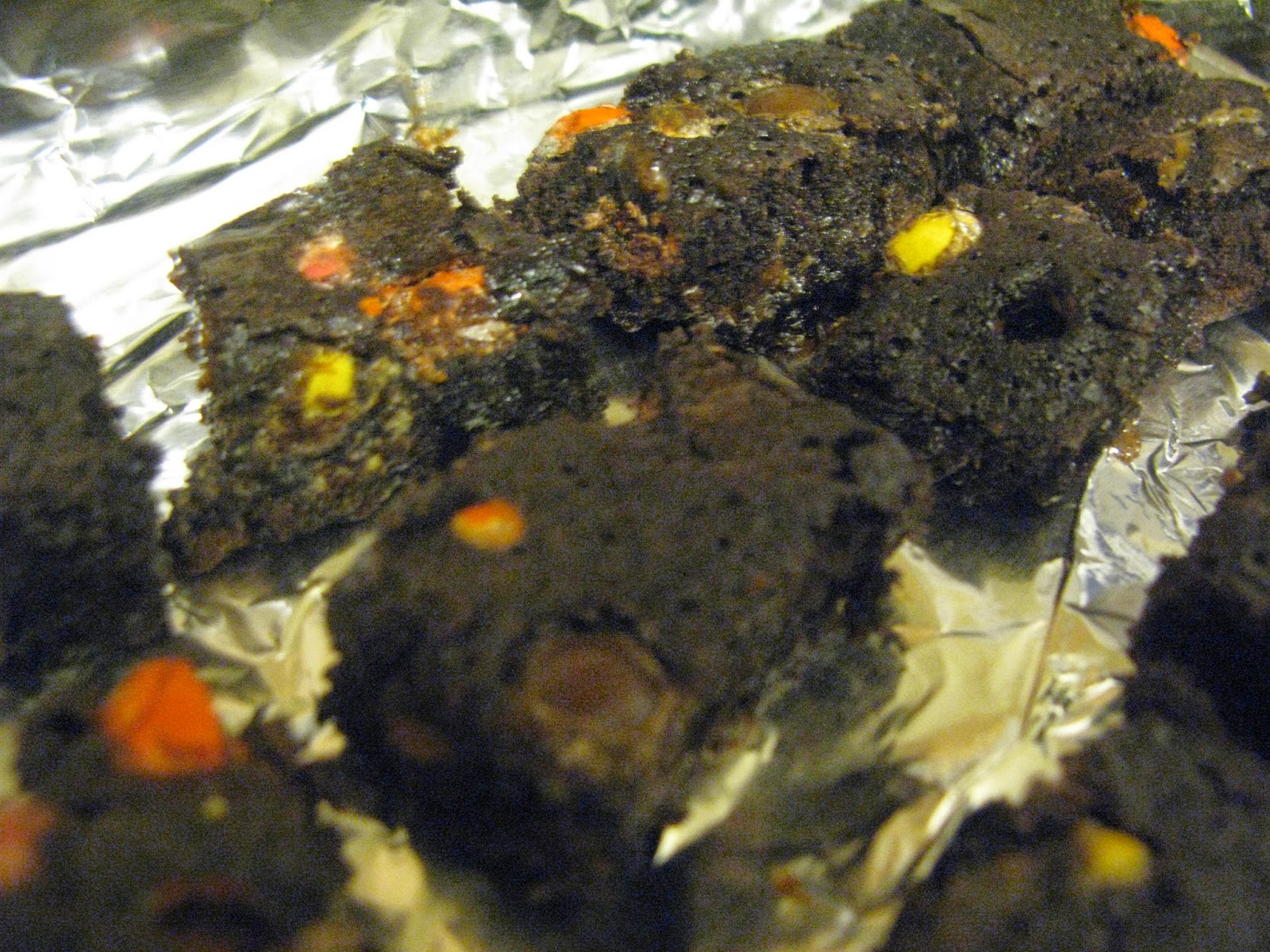 After a few years of not dressing up, you get to the age where it's cool to dress up again.  Now adults of all ages wear costumes at Halloween. 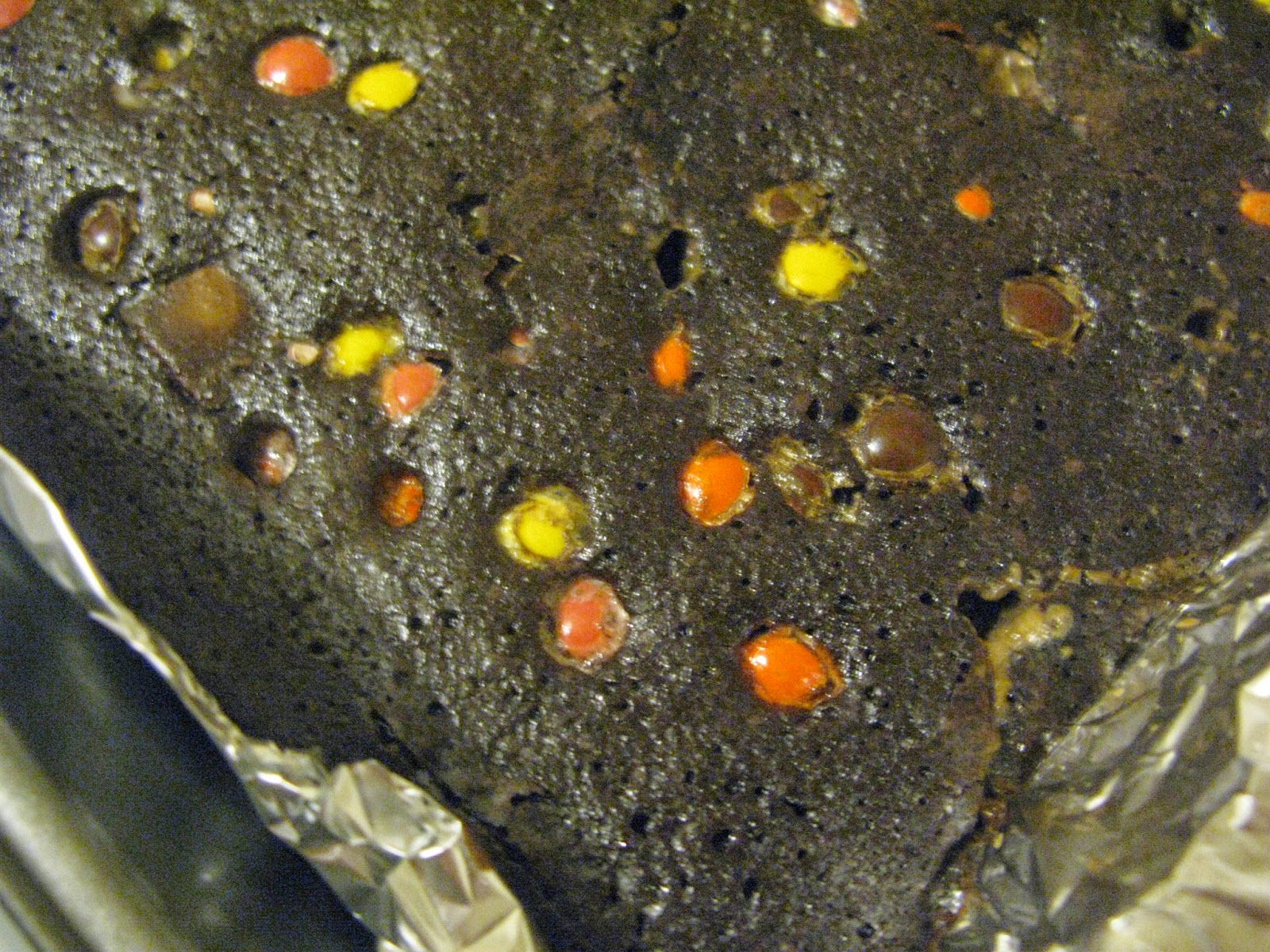 I'm the kind of person that procrastinates thinking about what to wear for Halloween, and then I put something together last minute the day of Halloween.  I always wear lame costumes. 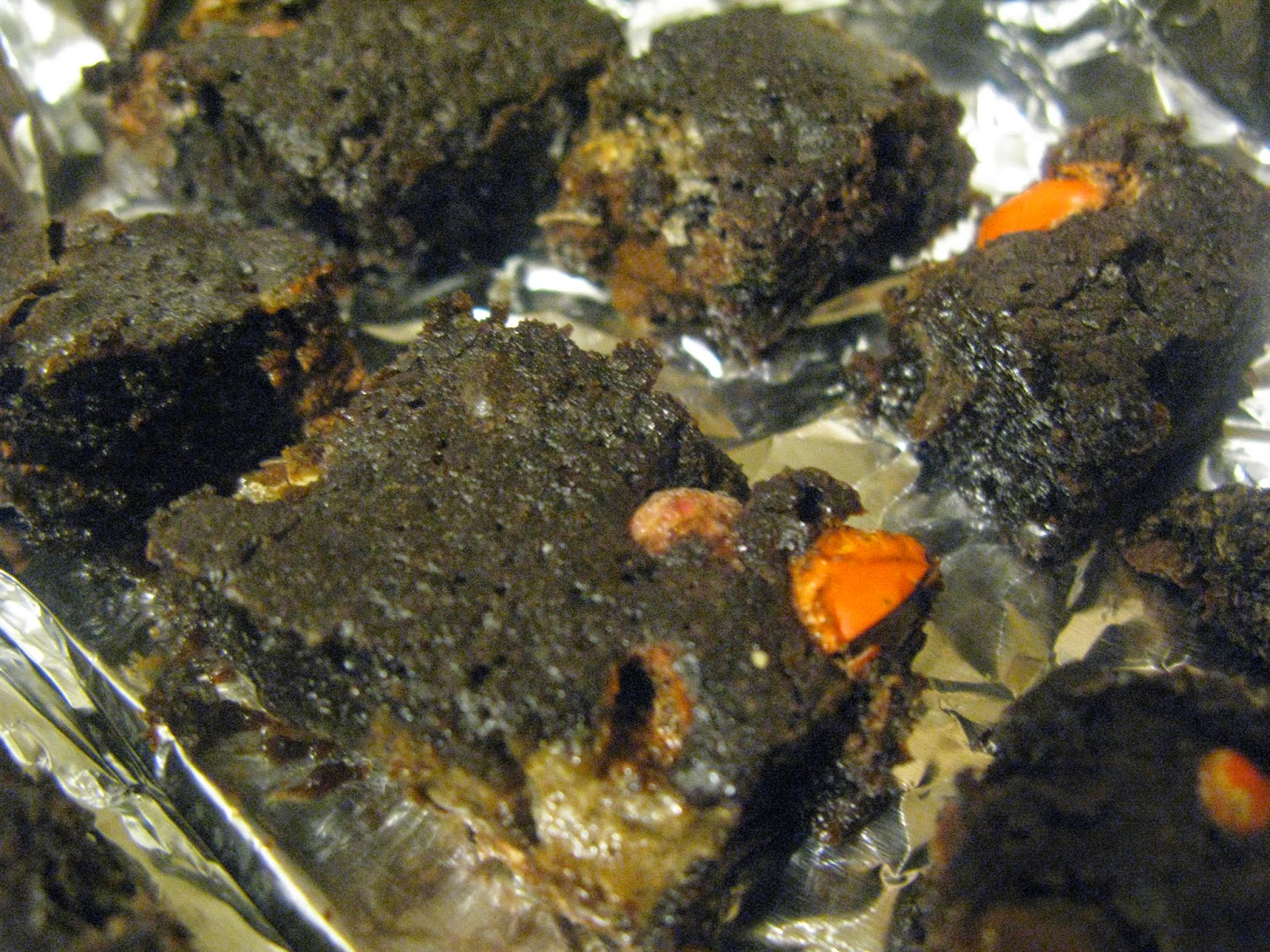 This is my second caramel brownie attempt.  In my first attempt, the homemade caramel disappeared into the brownie layer.  In these brownies, the caramel layer was still distinguishable after baking. 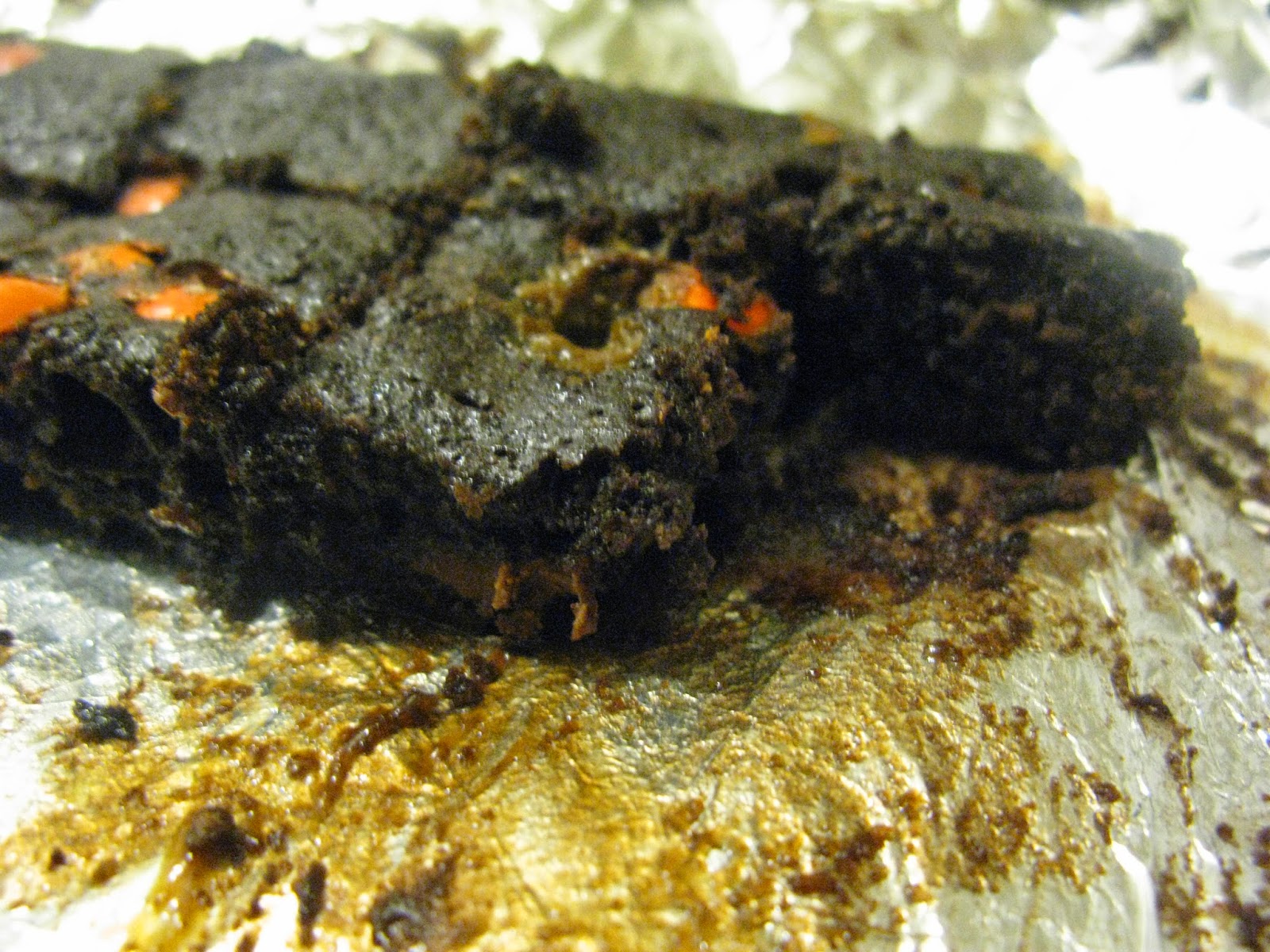 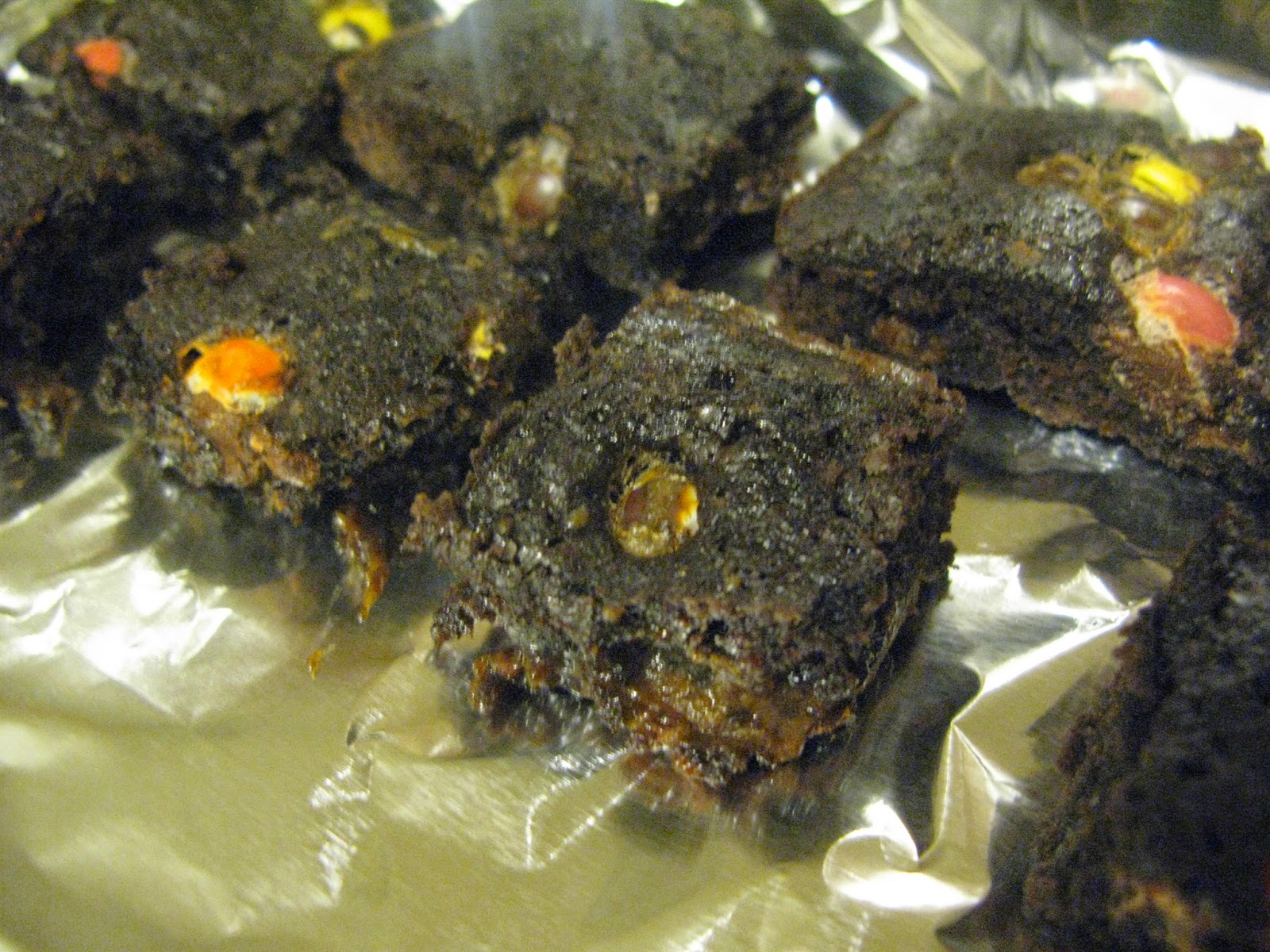 I prepared the brownie mix by combining the mix, eggs, water, and oil.  I added in the chopped Hersey bar into the batter. 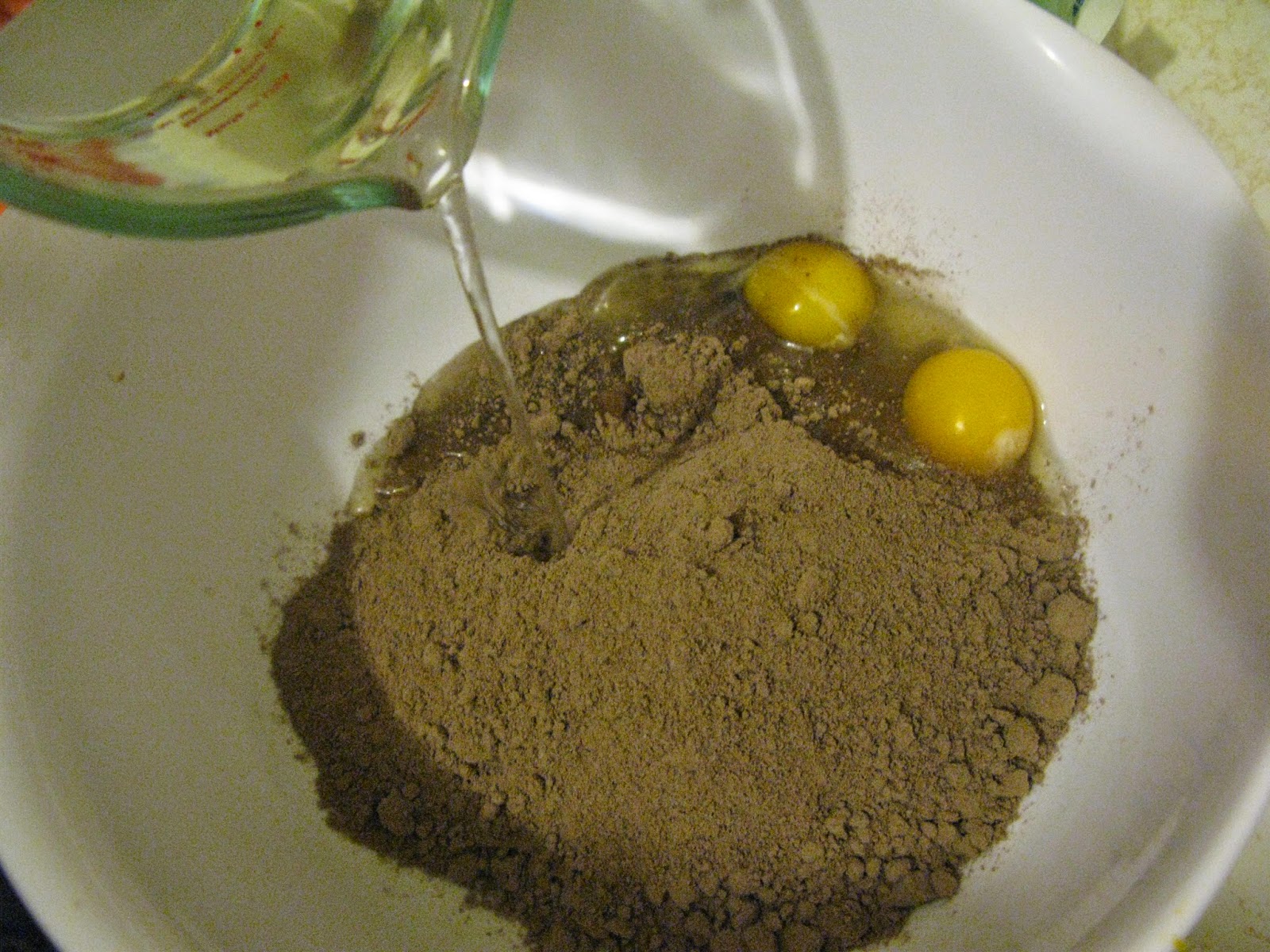 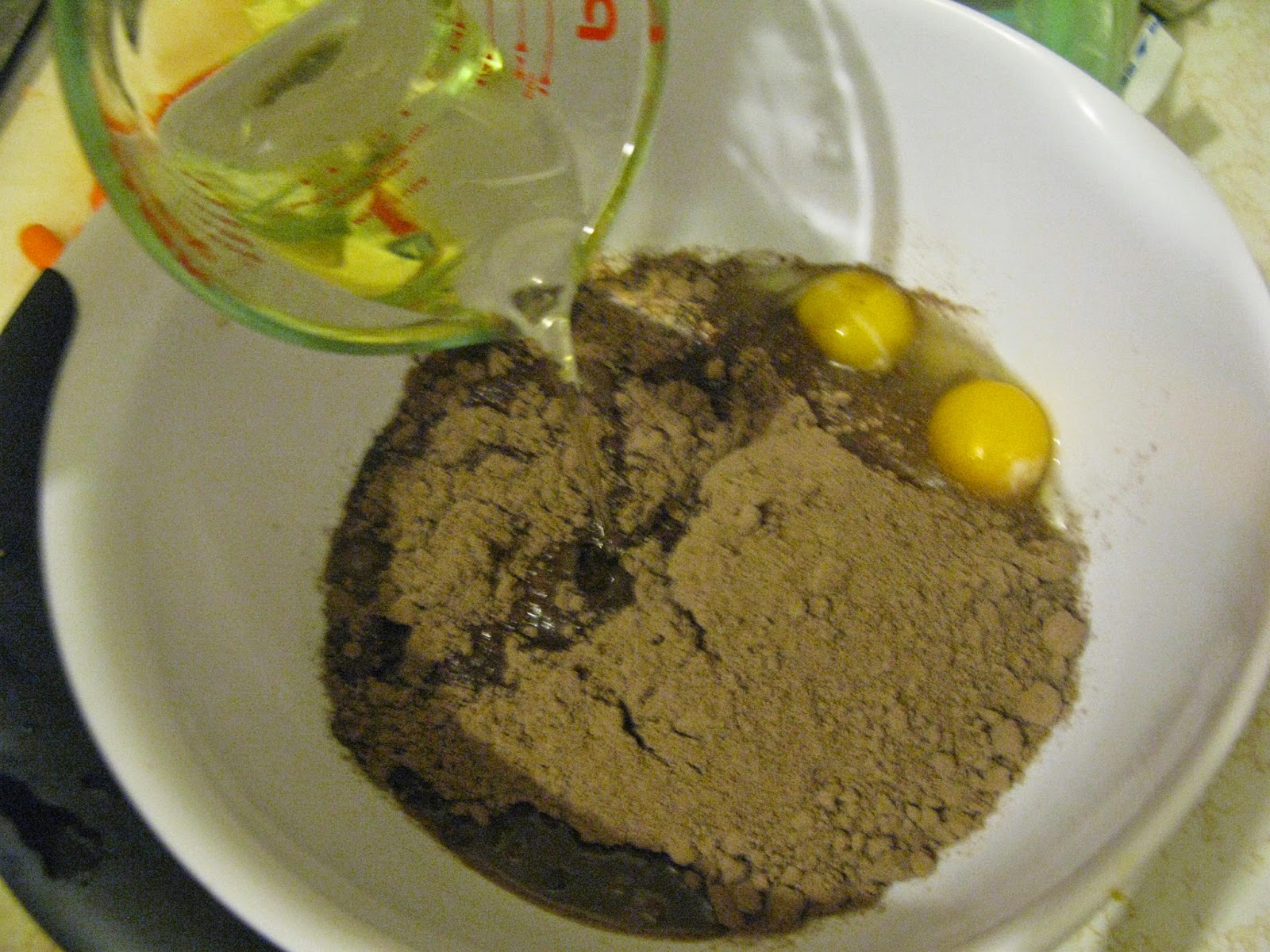 I poured half of the brownie batter into a 9 by 13 inch pan lined with oil.  I oiled the foil. 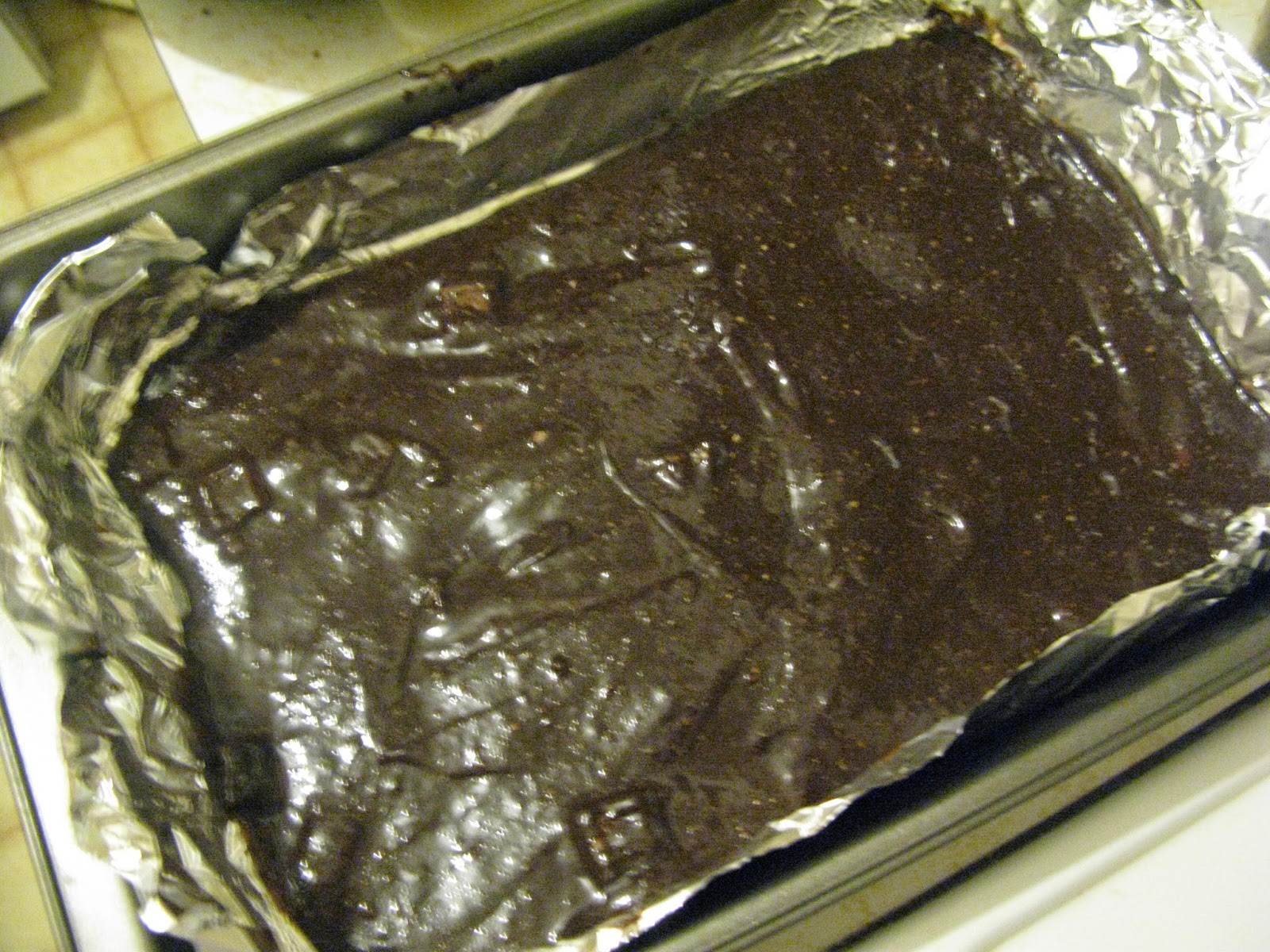 I warmed the caramel in the microwave so that it was pourable.  I poured it as evenly as possible on top of the brownie layer. 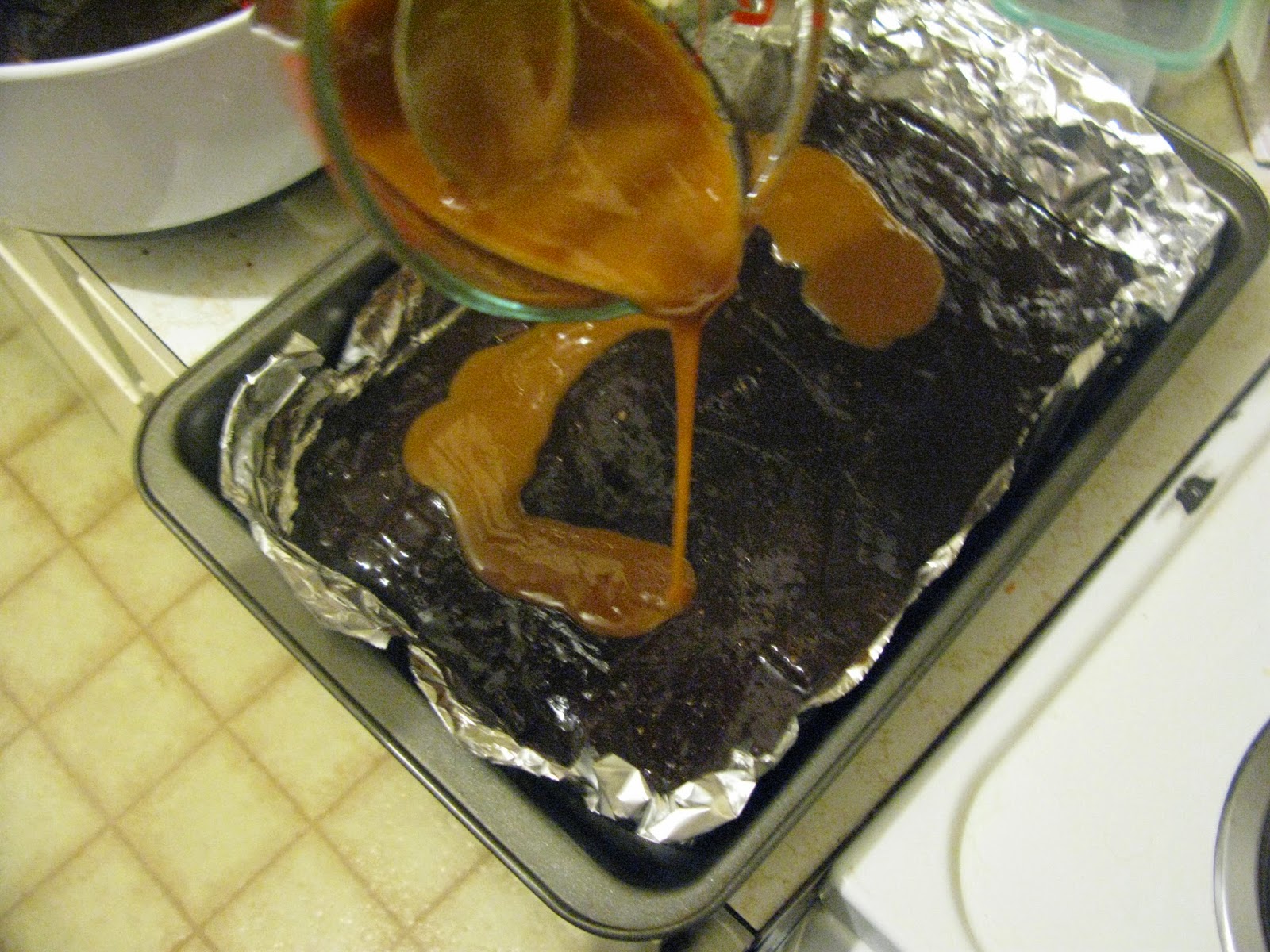 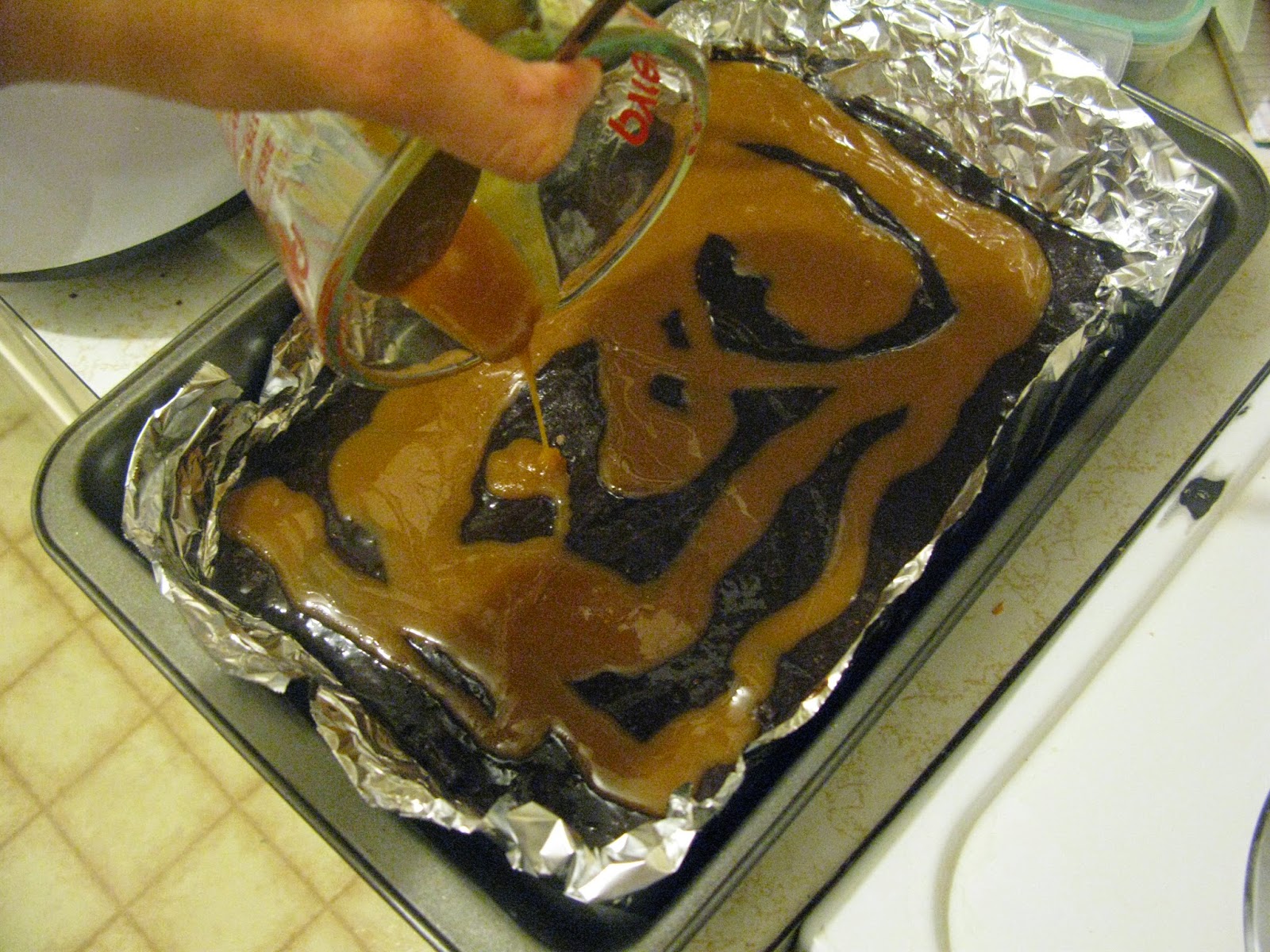 I gently spooned the rest of the brownie batter on top of the caramel. 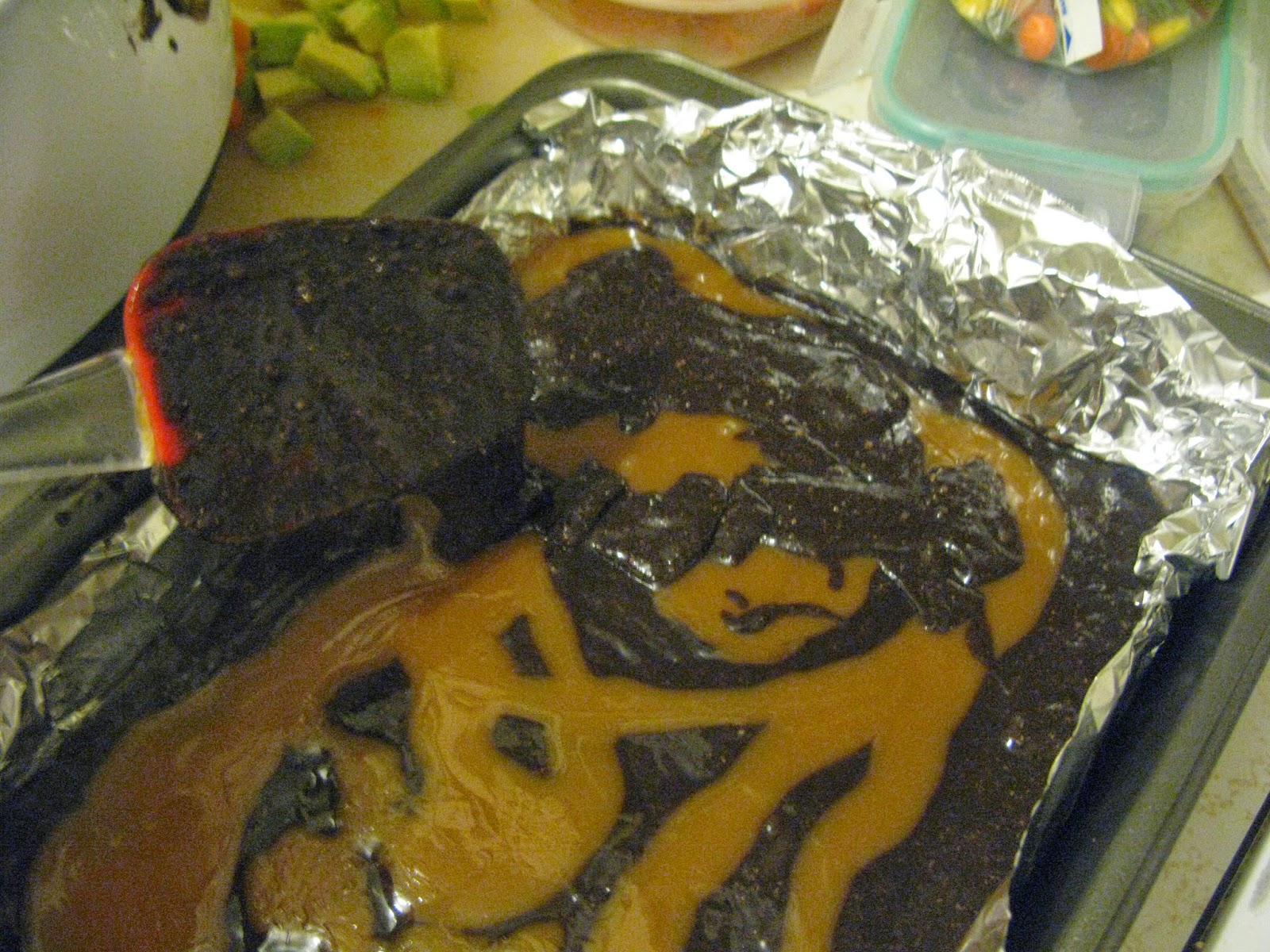 I sprinkled the candies on top of the brownies. 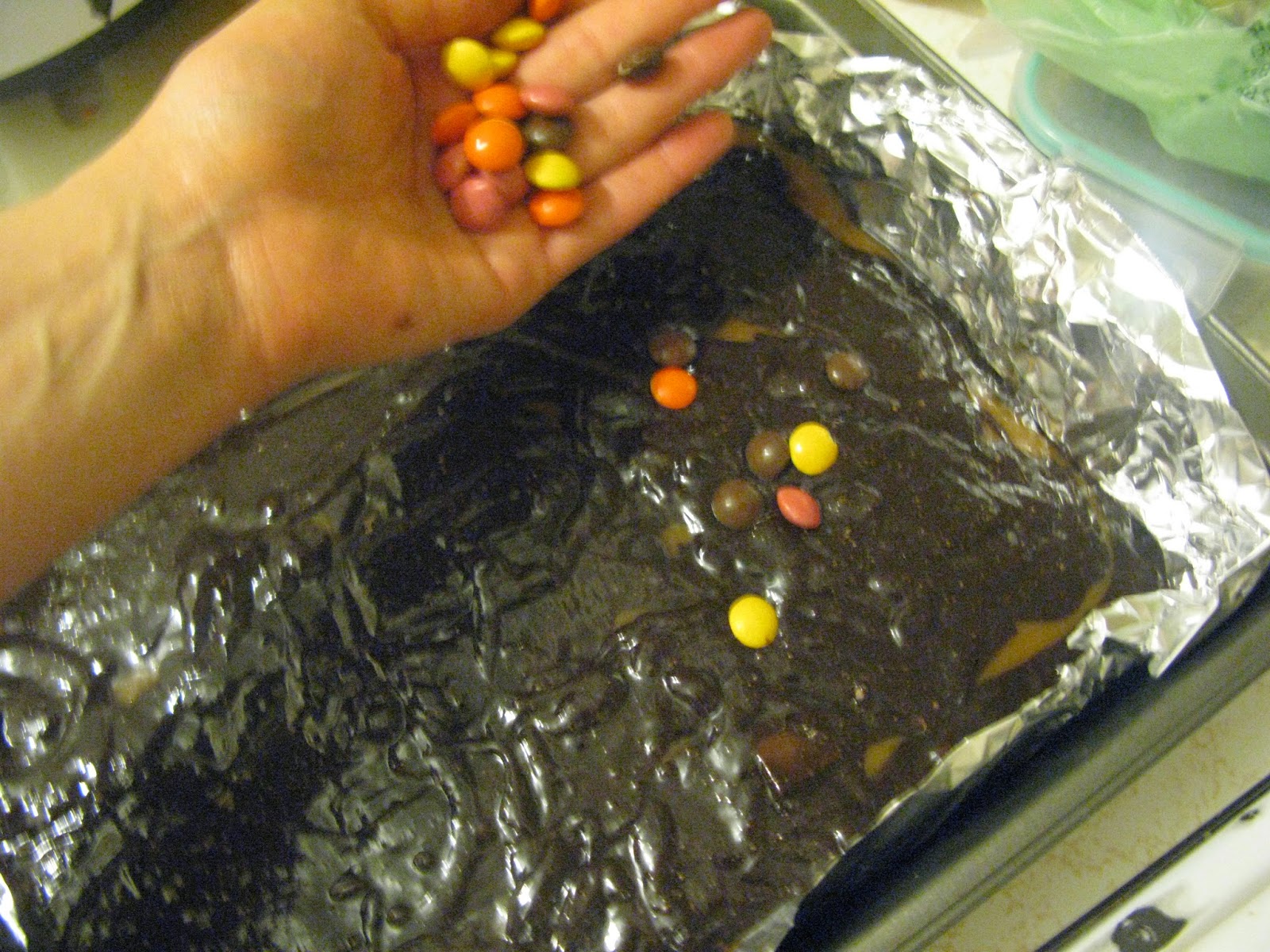 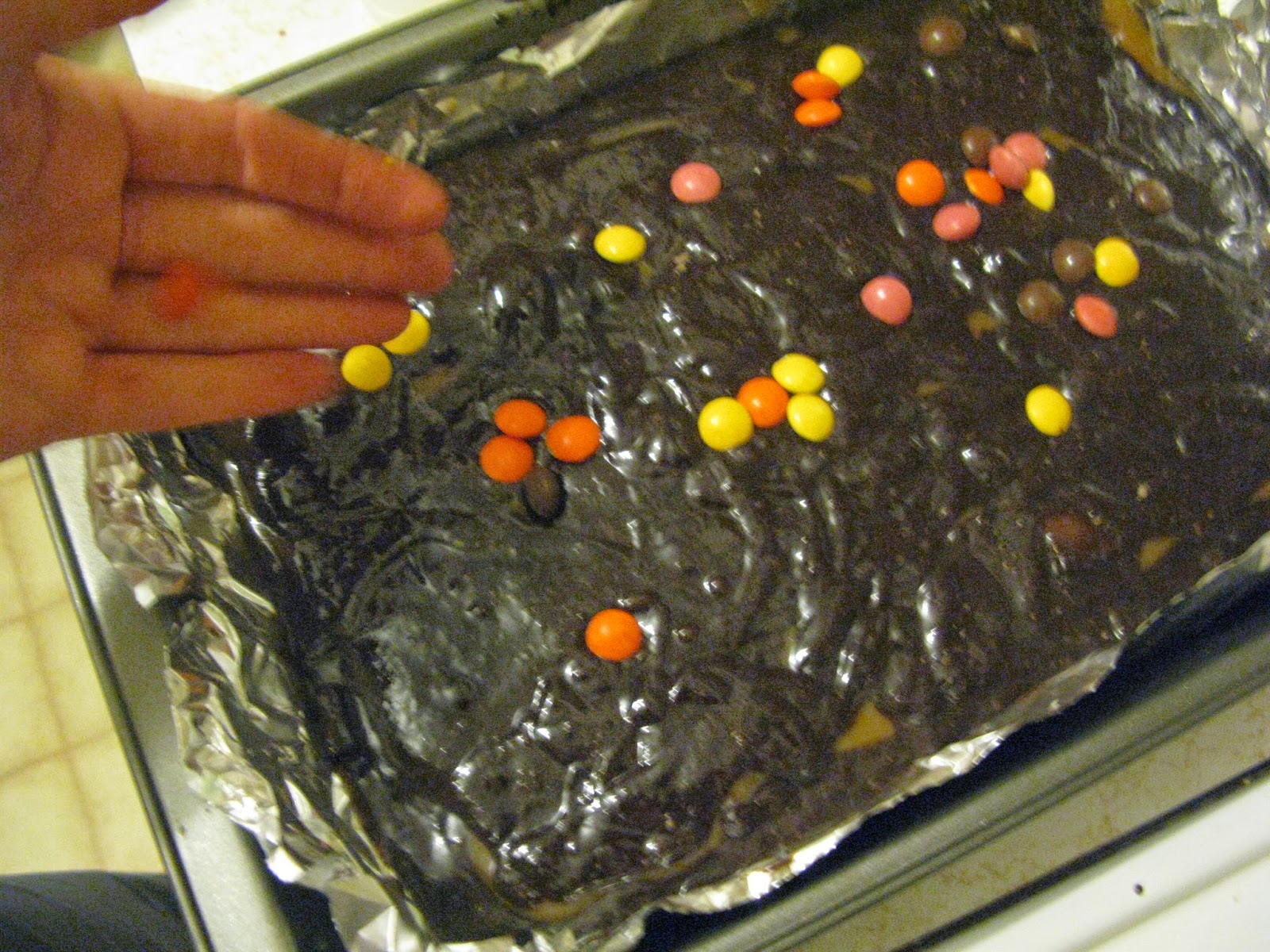 I baked the brownies for 21 minutes at 350 degrees. 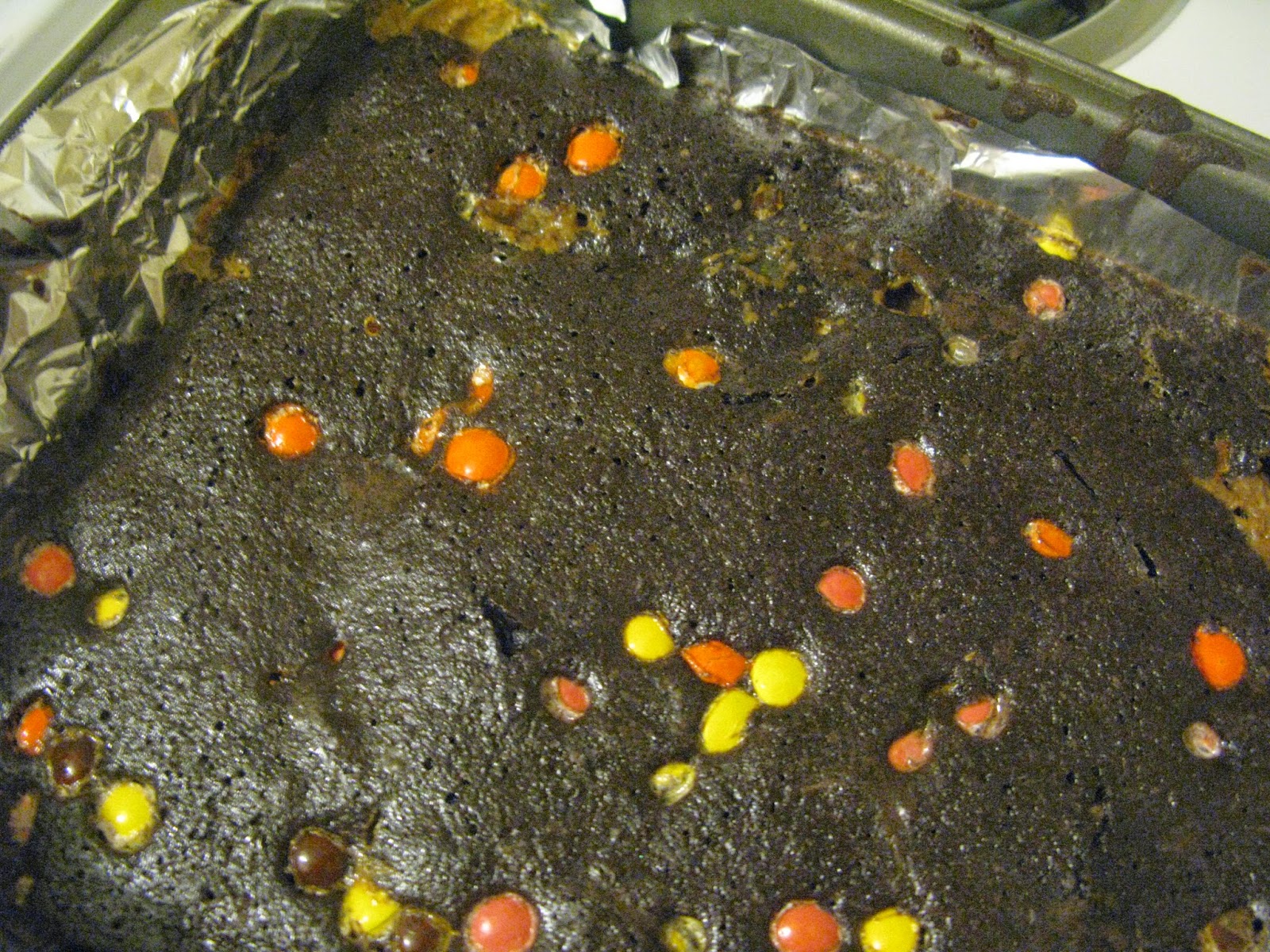 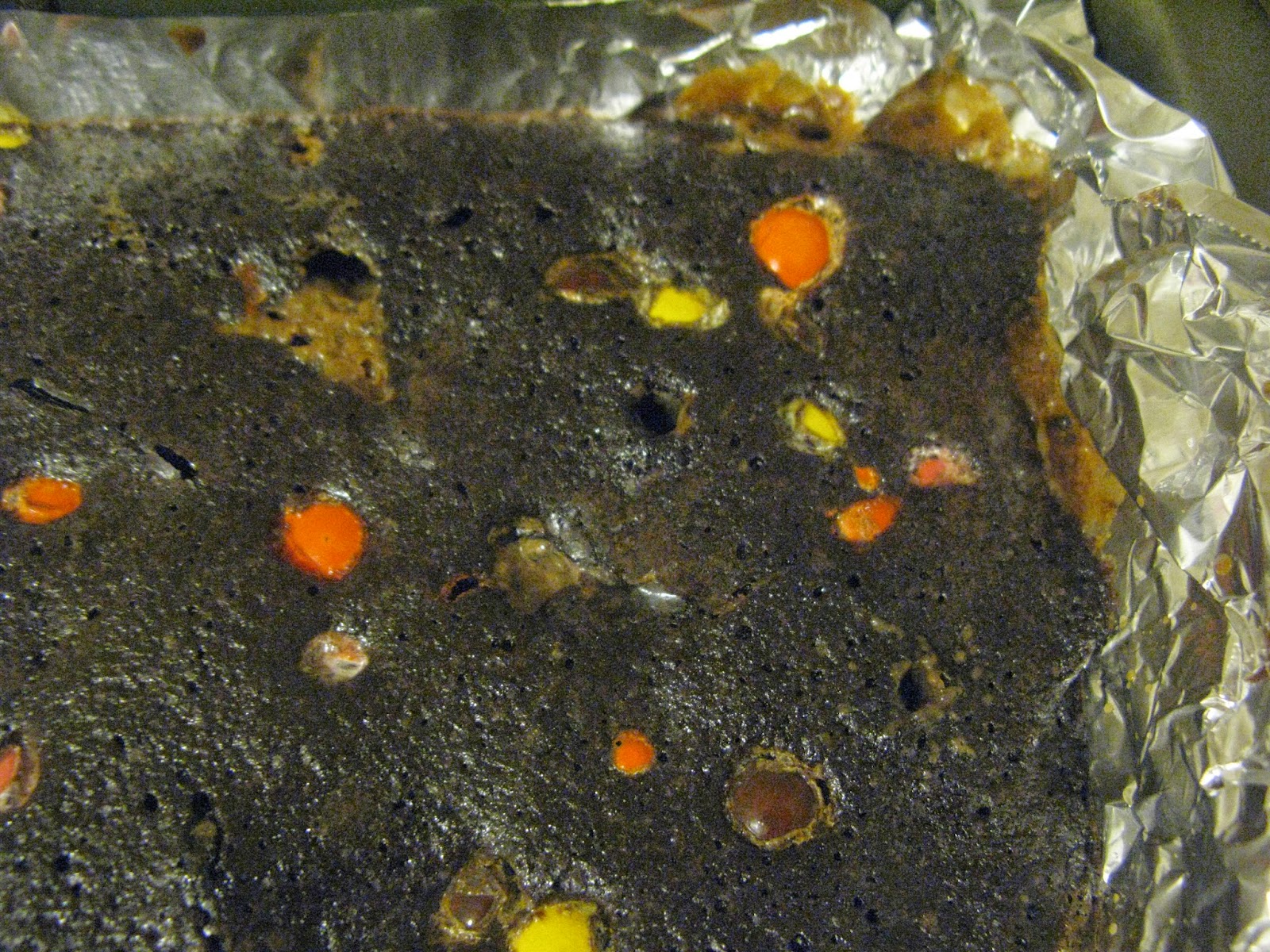 I let the brownies cool completely before cutting them. 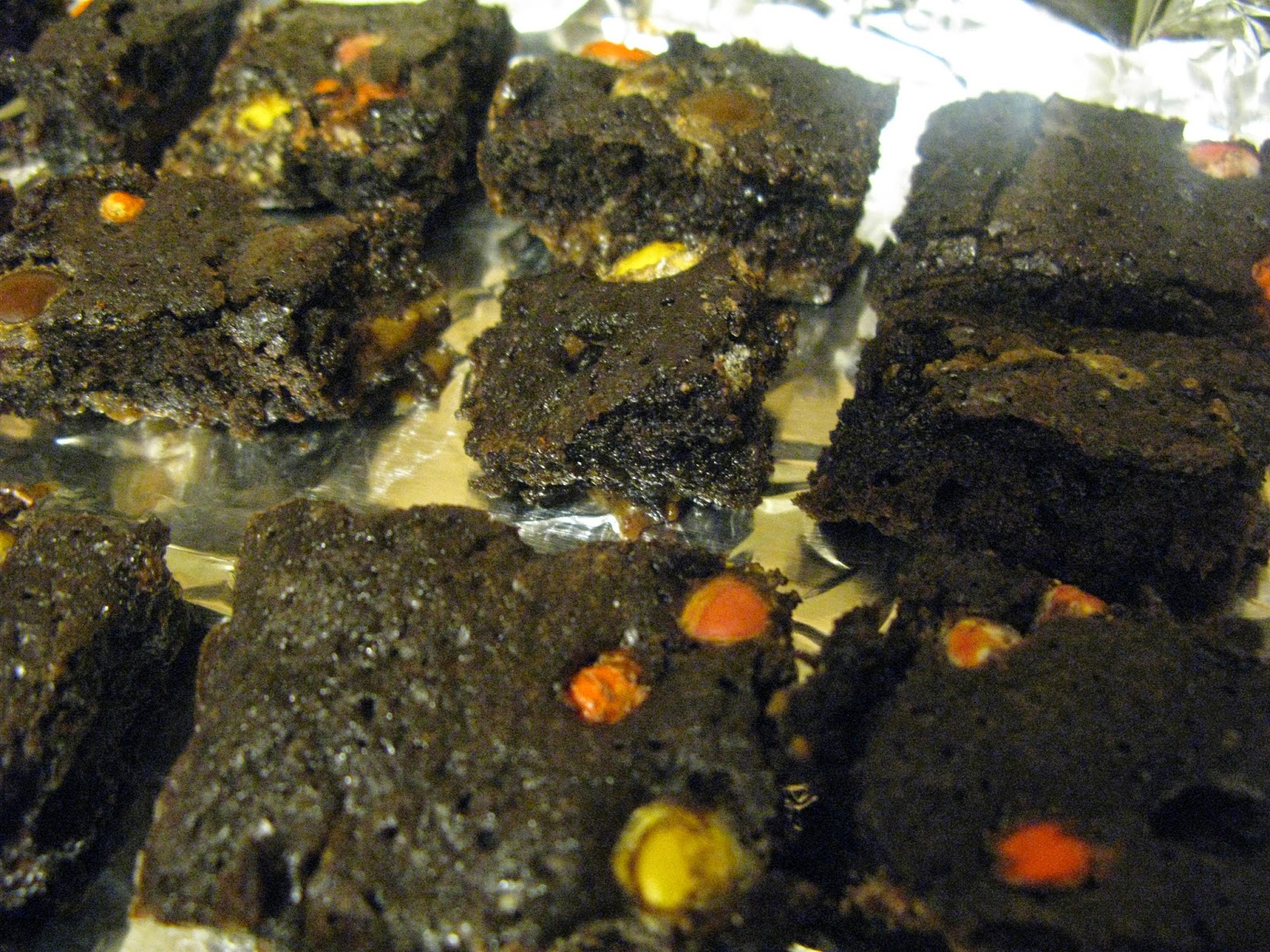 The caramel layer was still discernible after baking.  It makes the brownies really sticky, but sticky isn't a bad thing when it comes to desserts. 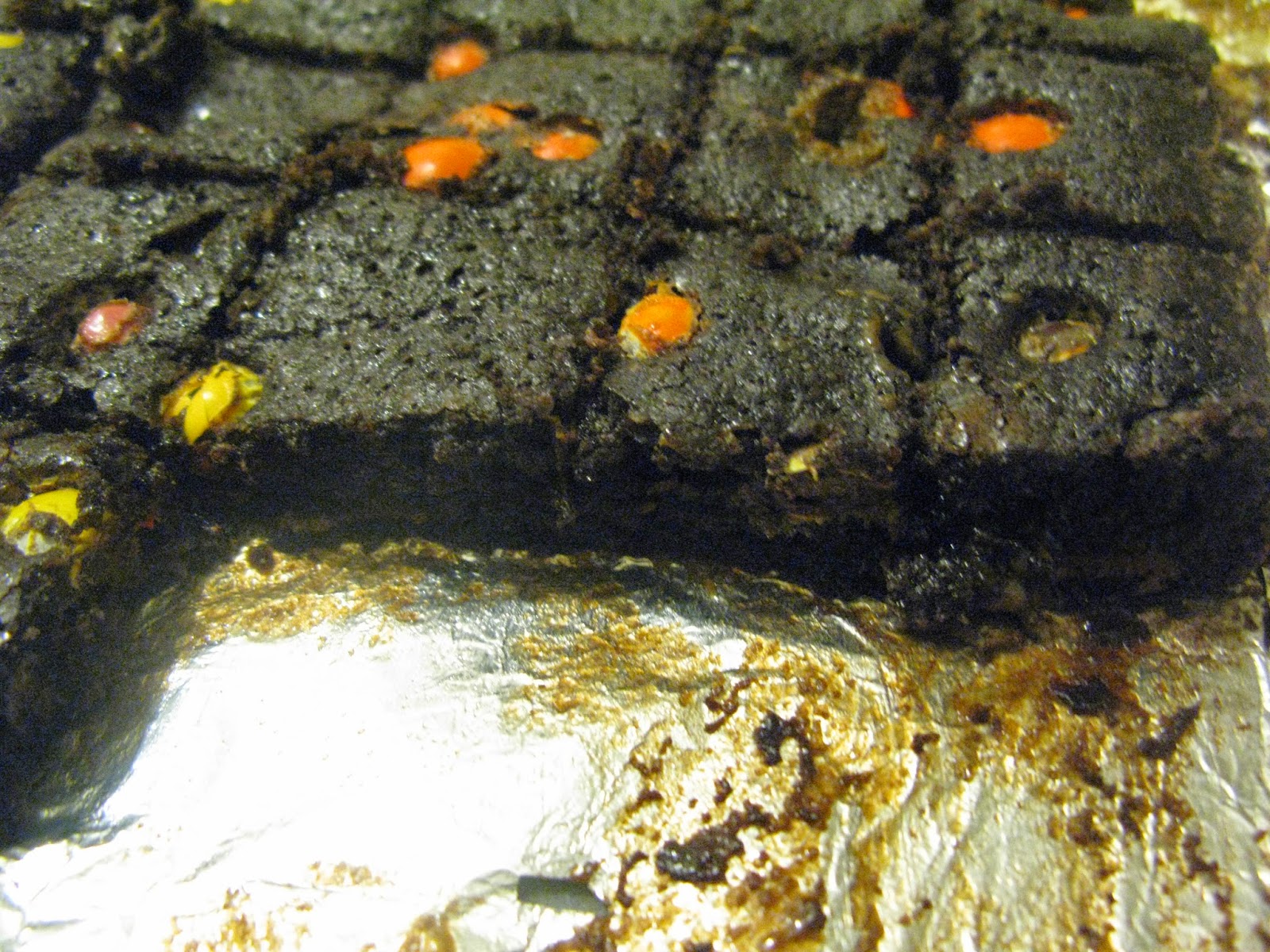 It is a very sweet and rich dessert.  Brownies are rich in and of themselves, and the caramel layers brings them over the top. 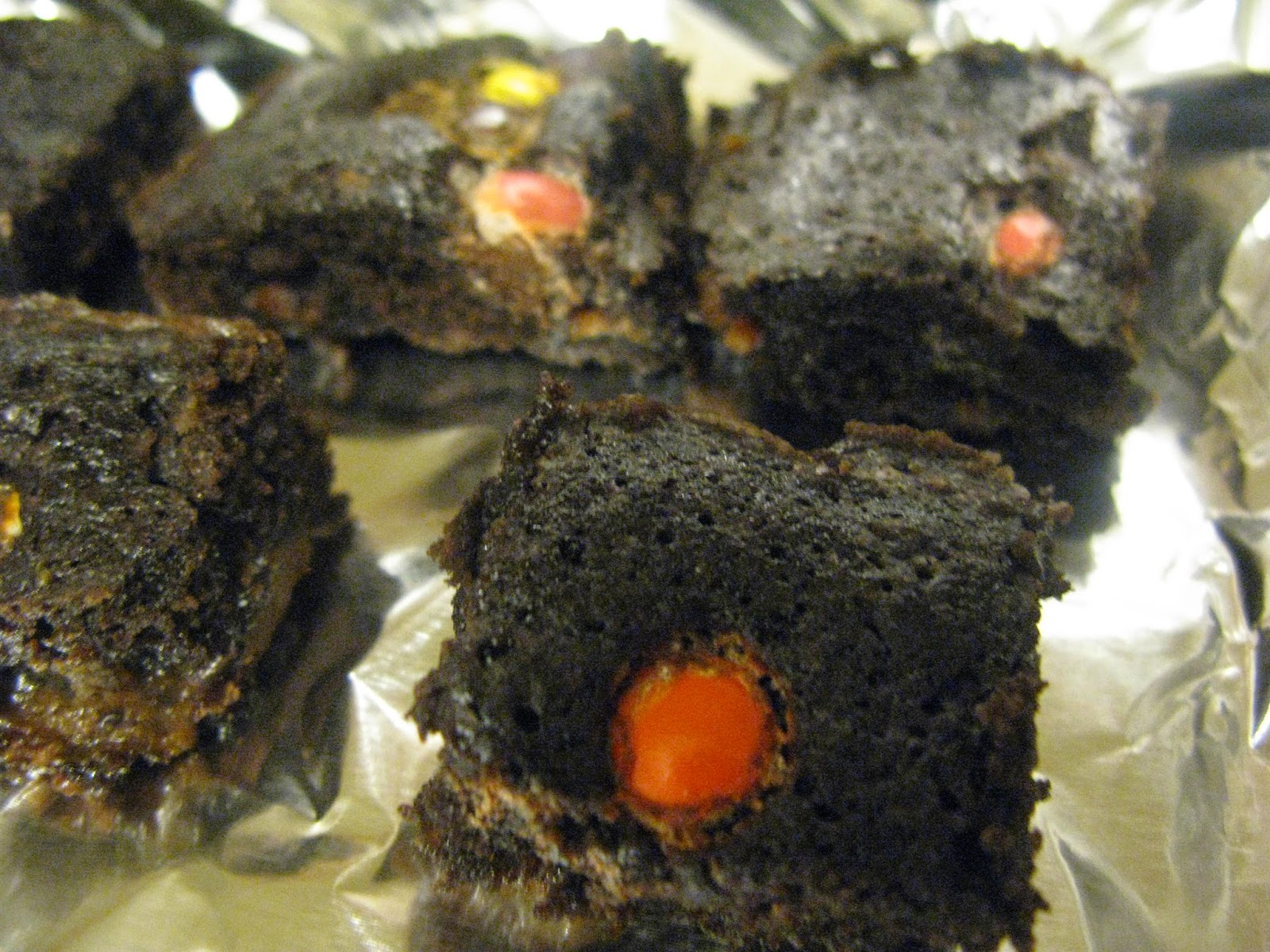 I don't think the candies on top added too much.  They provided a little crunch because of their candy shell, but nuts would have done the same thing. 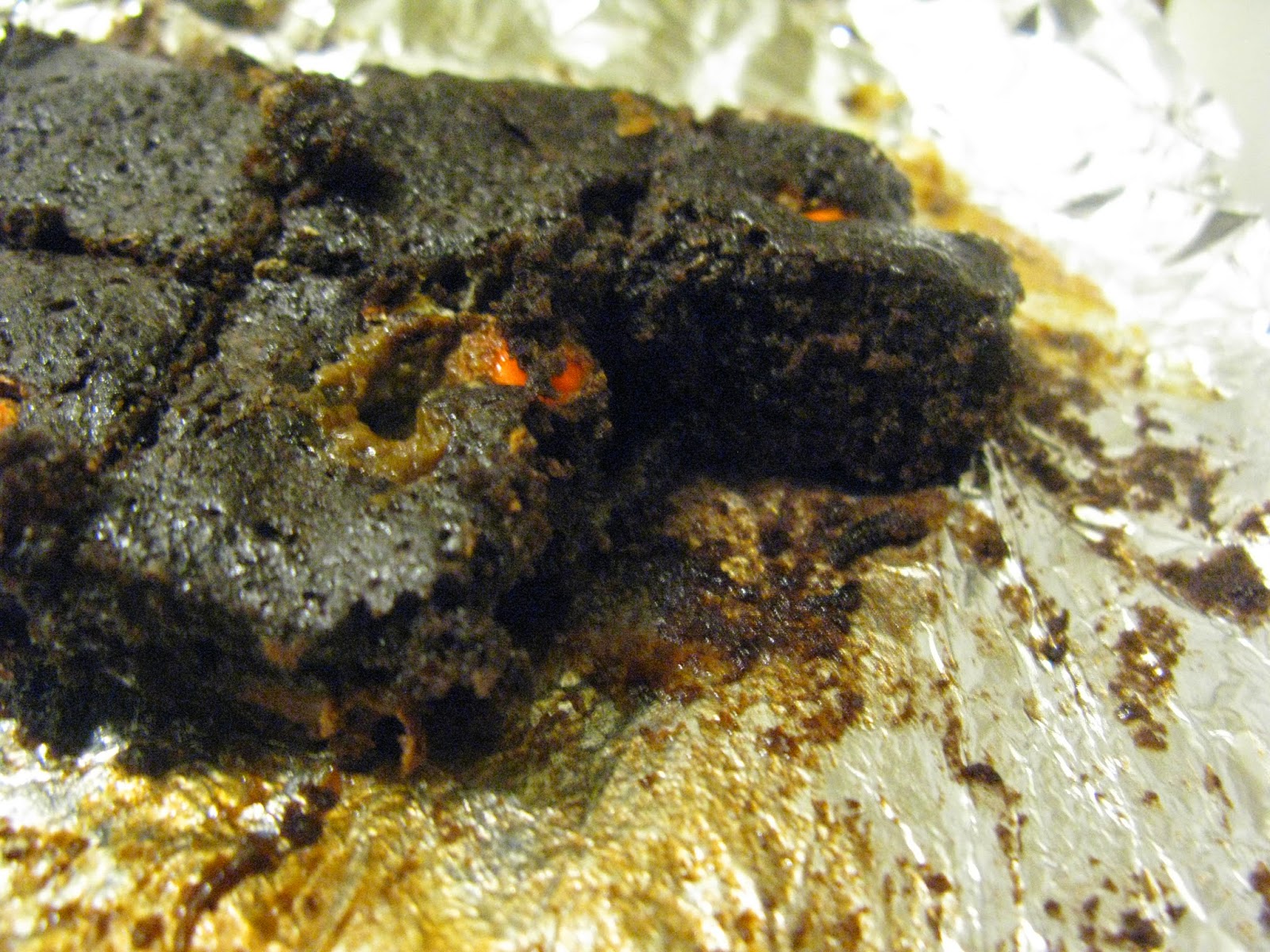 You mean to tell me there's caramel in these?! Ahh! I can't think of anything more decadent than a good caramel brownie like this! <3

Haha you are so right! There is definitely that age where it isn't cool to dress up right before high school and it becomes cool again but only if you can get away with a sexy outfit! These brownies look amazing for all ages! There no age too cool for Halloween themed brownies!

Caramel and brownies is pretty much my greatest weakness. Yum!

Lindsey, thankfully I have never felt to cool for brownies!
Trish- Mine too!

Oh wow, I would LOVE these with the candy on top!!!

Jenn, Everything is better with candy :)