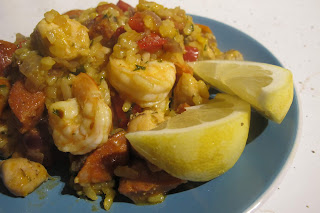 Last year I went to Spain during the Thanksgiving holiday break.  I tasted some paella there and bough a small quantity of saffron. 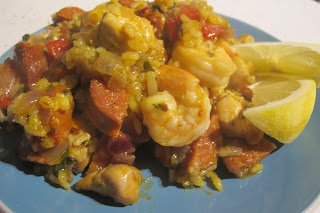 I used some of that saffron to make lamb tagine.  I still had quite a bit of saffron left over so I decided to make paella.  I used the remaining saffron to make another recipe I will post in the future. 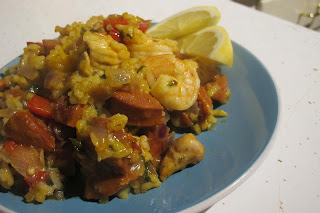 This is not the first time I have made paella.  I made paella with my family almost four years ago.  We ate it one year for Christmas Eve.  We had a Spanish Christmas Eve that year. 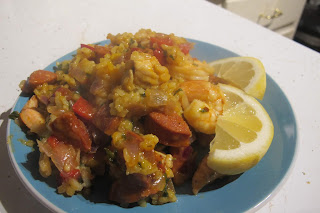 I found this paella recipe on allrecipes.com.  It has chicken, sausage, and shrimp.  I like recipes with lots of meat.  It called for a Spanish onion, but I just used a regular onion.  I'm not really sure where to find Spanish onions. 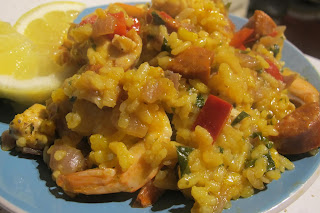 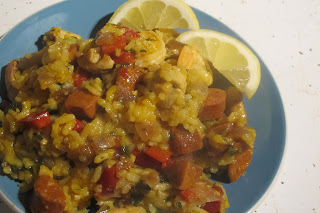 I cubed the chicken and placed it into a bowl.  I added paprika, oregano, 2 tablespoons of olive oil, salt, and pepper.  I stirred everything together and let this sit in the fridge and melt together.

I placed another two tablespoons of olive oil into a pan over medium high heat.  I added the garlic, red pepper flakes, and rice.  I stirred this over the heat for about three minutes.

I added the bay leaf, saffron, chopped parsley, lemon zest, and chicken stock.   I brought this to a boil,and then covered it and let it simmer for 20 minutes.

I added two more tablespoons of olive oil into a skillet.  I added the chopped onion and marinated chicken.  I sautéed this for five minutes over medium-high heat.

I added the chopped bell pepper and sauce.  The pan was very full at this point, so I had to be very careful.

I stirred this very gingerly for until the chicken was cooked through.  They wanted to to add the shrimp in with mixture, but I didn't have the space.  I ended up moving the chicken and sausage to the rice mixture.  I keep most of the moisture in the skillet and then added the shrimp.  I cooked the shrimp in the residual moisture until they were pink and cooked.

I added the shrimp to rice mixture and then stirred everything up until it was a incorporated. 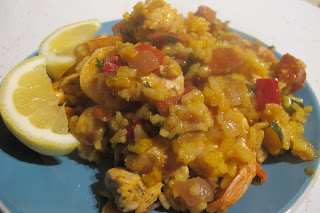 This was a scrumptious meal.  It was one of the best things I have made in a while. 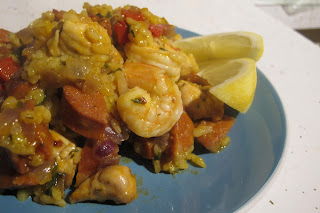 It was flavorful, savory, and packed full of delicious morsels. 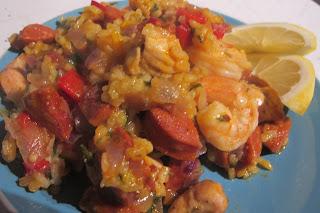 It has a little hint of heat and was full of warm, inviting spices. 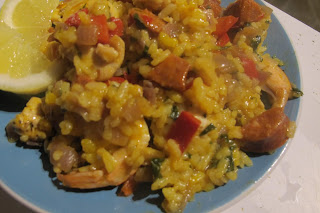 The rice was tender and mouthwatering. 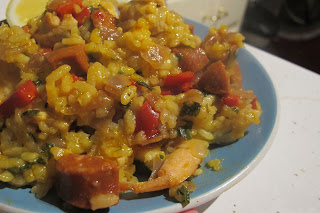 The chicken and shrimp were moist and succulent.  The sausage was spicy and savory. 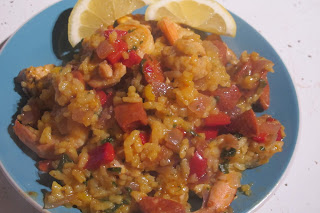 I added some freshly squeezed lemon juice of a little freshness and acidity. 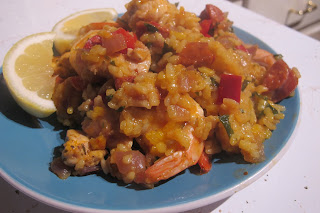 The flavors of this dish were really on point.  It was a tasty meal.  I plan on making it again. 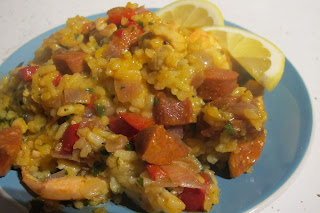