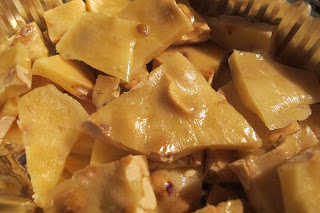 It is Christmas Eve.  I can hardly believe that it has already arrived.  The month between Thanksgiving and Christmas flew by. 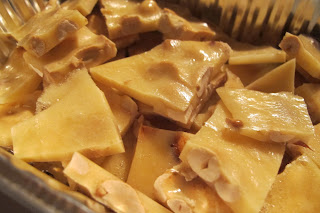 I am going home for Christmas, but I am leaving and arriving late.  My flight leaves six tonight.  I hope my flight goes well, or else I'll end up arriving very early Christmas day. 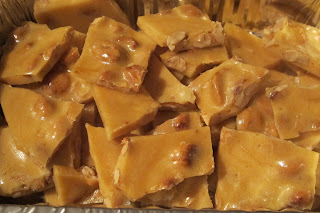 I made this candy to give to some friends for Christmas.  Last year I made peppermint fudge, cookie dough truffles, and English toffee.  It seems like I saw a little more ambitious last year.  For other occasions, I have also made honey candy, peanut butter cup fudge, and candied almonds. 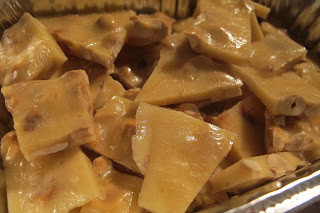 In the near future, I hope to make orange chocolate fudge and caramel.  If I'm really ambitious, I'll cover the caramel in chocolate. 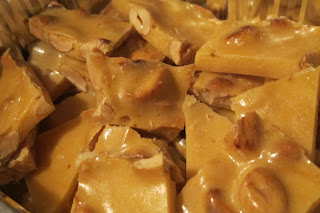 I found this peanut brittle recipe on allrecipes.com.  It requires a handy dandy candy thermometer.  I made it as directed, and it was completed in a flash. 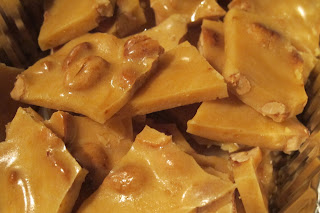 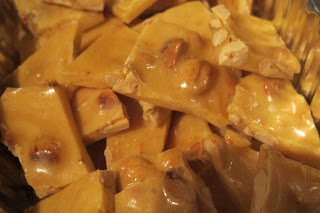 I added the sugar, corn syrup, salt and water into a pot.  I continued stirring the mixture over medium high heat until the sugar had dissolved.

I added the peanuts once the sugar had dissolved.  I continued simmering and occasionally stirring the peanut mixture until a candy thermometer had reached 300 degrees. I removed the pot from the heat once the mixture reached 300 degrees.  I added the butter and baking soda.  I stirred until all the ingredients were all incorporated.

I poured the sugar lava over a greased baking mat.  I spread the sugar thinly with a spoon.

I let the brittle cool completely.

After it had cooled, I broke the brittle into manageable shards. 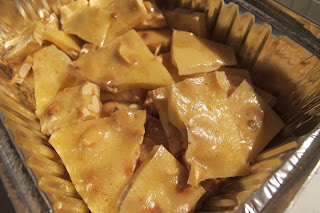 This was a slightly addictive treat.  It was crisp, caramelized, and buttery.

It had a touch of salt.  The nuts were crunchy and roasted. 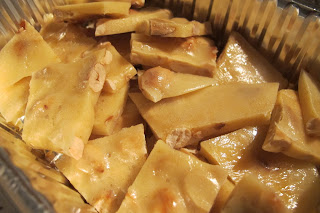 I only intended to eat a small bit but could stop myself from eating a "few" pieces.

The candy had a developed toffee flavor.  It was scrumptious and toothsome.  It made a wonderful Christmas treat. 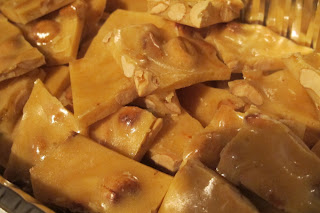