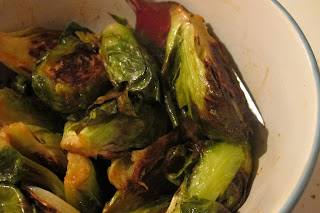 A couple of weeks ago I spent the weekend with a friend in Baltimore.  She told me about this dish she ate with brussels sprouts, sriracha, honey, and tofu.  I asked for the recipe, and she sent it to me.

In the few days between hearing about her recipe and receiving it, I searched for and made this recipe.  I have a soft spot for brussels sprouts.  I eat them at least once a week.  I'm always looking for a new way to prepare them. 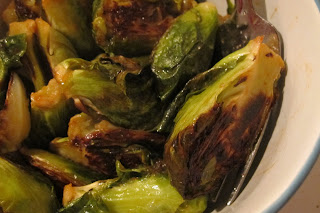 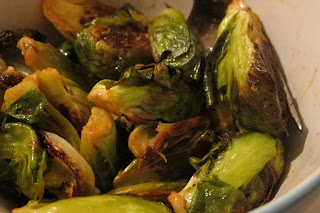 Sriracha was created in Thailand.  The name comes from the town Si Racha, which is in eastern Thailand.  The sauce was first made and served in Si Racha.  In Thailand, Sriracha is often used as a sauce for seafood.  In Vietnam, it is used as a condiment for pho.

Sriracha is a paste made from chili peppers, distilled vinegar, garlic, sugar, and salt. 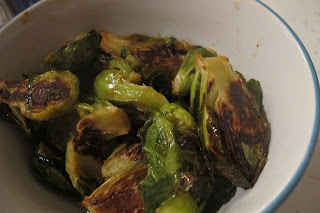 The recipe came from food.com.  Other than doubling it, I made it as directed. 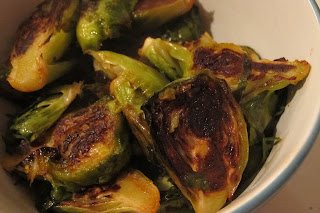 I rinsed the brussels sprouts and cut them in half.  I put them on a baking sheet and tossed them with the olive oil and salt.  I made sure the brussels sprouts were evenly coated and laying in a single layer on the pan.  I baked them for 20 to 25 minutes at 425 degrees.  I stirred them halfway through the cooking time.

While the brussels sprouts were roasting, I prepared the sauce.  I put the sriracha sauce, honey, and lime juice into a bowl.  I whisked until thoroughly combined.

These brussels sprouts were delectable.  They were crisp, golden, and caramelized on the outside, while the inside was tender.  They were perfectly cooked.

The glaze was exquisite.  It was spicy, bright, and sweet.  All of these appetizing flavors complimented each other well.

The glaze had a little heat but it was pleasant and enjoyable.

The flavors were exciting and bold.

The texture was perfect.

Overall, it was a scrumptious and satisfying dish.  I give this recipe two enthusiasts thumbs up. 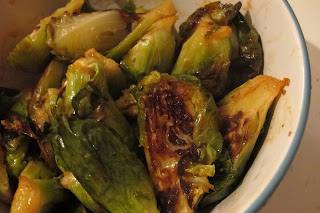