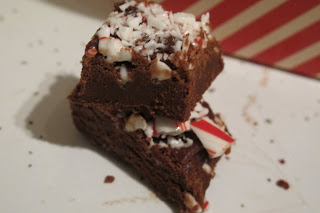 I have made a few candy recipes this Christmas.  I already posted cookie dough truffles  and English toffee.   I made the truffles, toffee, and this fudge as gifts for friends.  I'm usually not so on top of things.

I was well prepared for Christmas this year.  I finished most of my Christmas shopping by December, and I made loads of Christmas candy.  I didn't send Christmas cards, but you have to chose your battles. 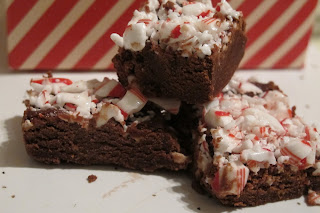 I bought a candy thermometer to make the English toffee, and I was able to use it again to make this fudge.  I have made a simple fudge that only required chocolate chips and sweetened condensed milk.  That recipe didn't require a thermometer.  This is my first time making a traditional fudge.

I was pleased how the fudge turned out.  In the future, I'll make more fudge and candy recipes with my thermometer.  Candy always makes a welcome gift.  This chocolate fudge recipe came from allrecipes.com.  I added mint extract instead of vanilla.  I also added crushed peppermint candy canes on top of the fudge before it cooled. 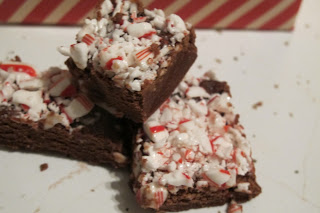 I added the sugar, cocoa powder, and milk into a pot.

I stirred and brought the mixture to a boil.  I eventually switched to a whisk. 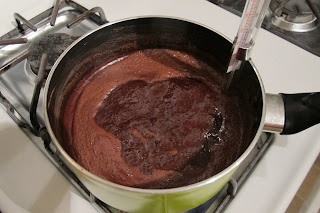 Once the temperature reached 238 degrees, I added the peppermint extract and butter.

I stirred and stirred.  I stirred until the butter had melted, and then I continued stirring.

I stirred until the fudge was thick and no longer glossy.  This took longer than expected.  The recipe says not to under-stir.  One it was thick and and fully stirred, I poured it into a nine in squash dish that was lined with parchment and greesed.

I mashed the fudge down evenly and sprinkled it wish crushed candy canes.  I used ten candy canes but 8 would have been enough.  I had extra.

I let the fudge cool completely before cutting it into little squares.

It was good fudge.  The flavor was minty and fresh.  The chocolate flavor was rich and decadent.

The texture was creamy, smooth, and dense.  It was delicious and luscious.  In the future, I might make this in a smaller pan because I like a thick layer of fudge.  The flavors were good.  The fudge was a festive and toothsome.