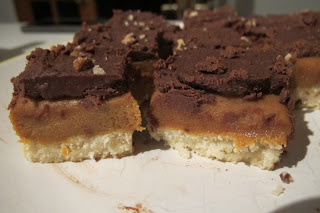 We had a work party today at lunchtime.  I was planning on being a little healthy.  I can't be too healthy at a work party.  My downfall was this incredible cake. 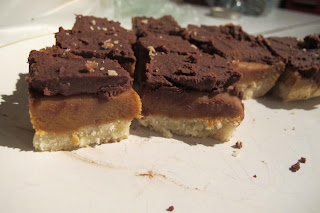 My supervisor brought it in.  I think he bought it at Wegmans.  I'm usually strongly apposed to cake purchased remade from a grocery store, but this cake was incredible.  It was sweet potato cake with a cinnamon cream cheese frosting.  The cake tasted very similar to a spicy pumpkin cake. 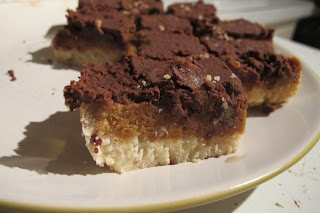 I have seen a few recipes for millionaires' shortbread.  Wikipedia says that it is Scottish in origin.  The same article also states that the first recipes for this confection were published in Australia in the 1970s.  It is not that old. 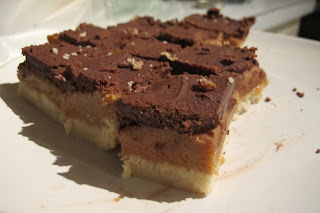 Shortbread is definitely Scottish.  The first recipe was published in Scotland in 1736.  It was published by a Mrs. McLintock.  Shortbread is made with one part butter, two parts sugar, and three parts flour.  Similar cookies are made in Sweden, Ireland, and Denmark. 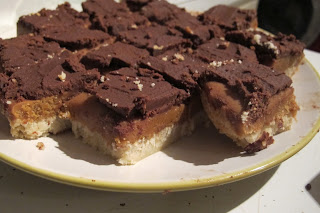 Shortbread was made and eaten in Scotland during the twelvth century.  A refined version appeared in the sixteenth century that is credited to Mary, Queen of Scots.  This version was made with caraway seeds. 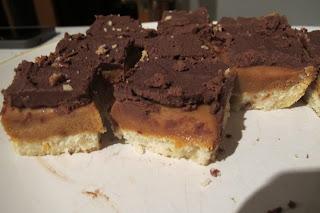 The base caramel shortbread recipe came from allrecipes.com.  I added cornstarch to the shortbread.  I also added salt, vanilla, and more sweetened condensed milk in the caramel layer.  In the caramel layer, I also replaced the corn syrup with honey.  For the chocolate. I added butter and milk.  My chocolate layer was a little funky, so that may have been a poor choice. 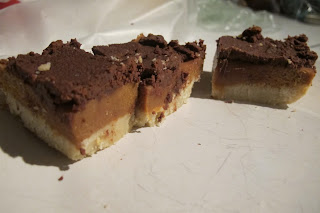 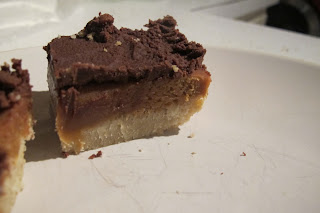 I mixed together the two thirds cup of softened butter, white sugar, flour, and cornstarch together.

I smashed it into the bottom of a nine inch square baking pan.  I baked it for 20 minutes at 350 degrees. 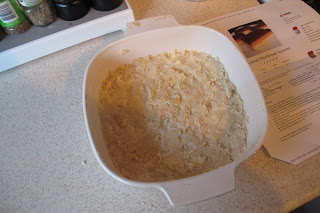 For the caramel layer, I combined the brown sugar, 1/2 cup of butter, salt, sweetened condensed milk, and honey into a pot over high.

I brought this to a boil until it reached 250 degrees on a candy thermometer.  The recipe says to boil it for five minutes.  After it was hot enough, I mixed in the vanilla off of the heat and continued stirring for a couple of minutes. 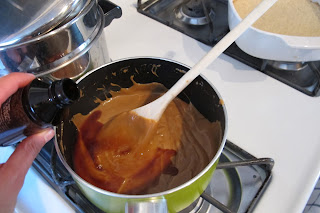 I poured this over the baked, but still warm, crust.  I let this cool until the caramel was firm.

These were very decadent, rich, and toothsome little bars. 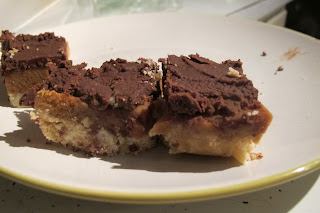 The caramel was perfectly set up.  It was creamy and chewy but not gooey.  I didn't want the caramel layer to ooze out of the bar once they were cut into.  The caramel was soft but set.  It was sweet and buttery too. 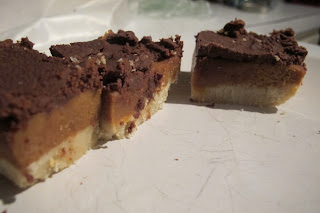 The shortbread layer was soft and buttery.  It was less sweet, which was good.  The caramel and chocolate were sugary enough. 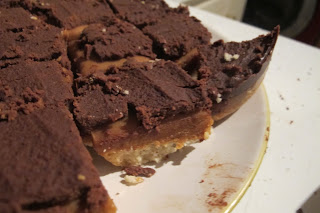 The top was milky and delicious.  It was not as smooth as I would have liked.  I'm not sure what happened.  Perhaps the milk may have caused the chocolate to separate a little.  Fortunately, tt was still tasty. 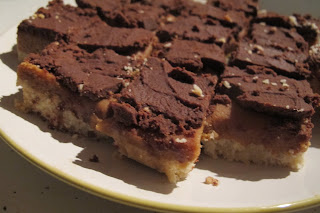 It was a scrumptious splurge.  It was well worth the calories! 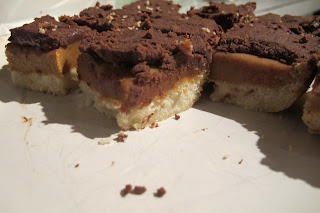 Any one of those layers would have been delicious on their own (I am particularly partial to shortbread and caramel), but together they must be wonderful! The caramel is the perfect consistency for a bar. Never having made caramel I am curious to give it a try! I think the problem with your chocolate was that the milk caused it to seize. Next time try using just butter or oil or coconut oil to thin the chocolate to the desired consistency (it only takes a tiny bit).

Wow - these look incredible! I could eat the entire batch!

Millionaire's shortbread is the BEST. These look awesome!