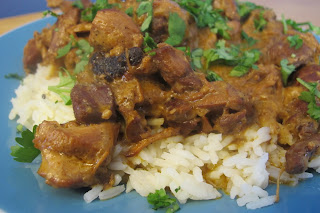 Two days ago I ate a bagel with cream cheese, smoked salmon, tomatoes, and onion.  It was delicious, but the reason I mention it is I'm pretty sure it game me a weak food born illness. 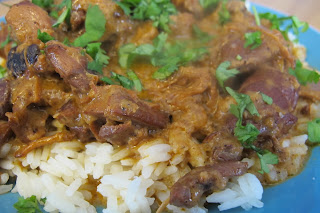 I spend the following night twisting and turning.  I woke up multiple times and slept fitfully.  Luckily, I think I am fully recovered.  My stomach feels empty but not angry. 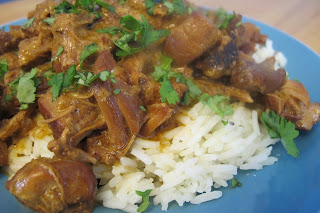 I would have called in sick the next day at work, but I have ween away from my desk for almost a week because of a training.  I knew I would have a mound of emails. 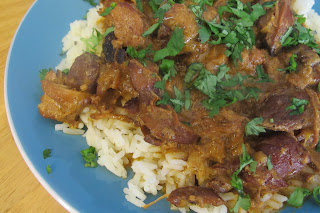 Butter chicken is Pujabi cuisine.  It was developed by the Moti Mahal restaurant in Delhi, India.  It often includes garam masala, ginger, coriander, cumin, turmeric, and chili.  It was created in the 1950s. 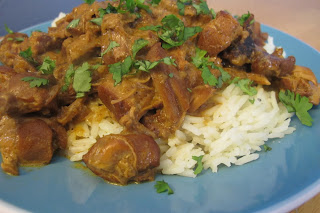 Moti Mahal is the oldest restaurant in Delhi.  It has invented other Indian dishes besides butter chicken.  It was created because some tandoori chicken had gone dry, and the cook added it to some flavorful sauce to revitalize it. 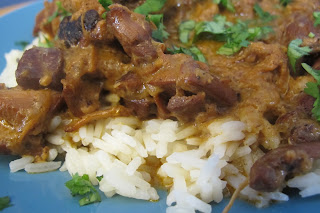 I added half of the butter and half of the oil into a skillet.  I cubed the chicken and browned half off the chicken in the skillet over medium-high heat.  This took about five minutes.  I added the chicken to the slow-cooker.  I repeated the process with the remaining butter, oil, and chicken.

I added the chopped onion in the remaining fat.  I cooked the onion until translucent.  This took around four minutes. 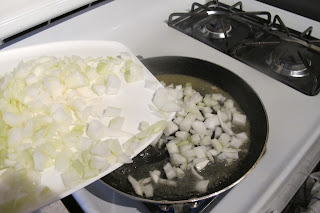 I added the garlic and ginger.  I sautéed this for two minutes.

I poured the onion mixture over the chicken in the slow-cooker.  I cooked this on low for about five hours. After about five hours, I added the cream.  I cooked this for another 30 minutes on high. 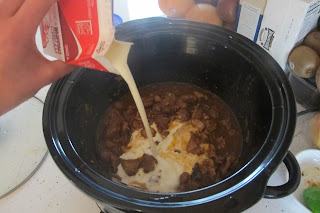 I served this on top of white basmati rice.  I garnished each serving with chopped fresh cilantro. 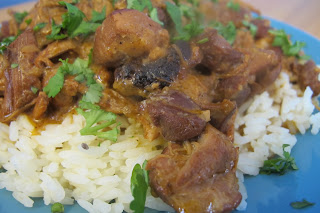 This was scrumptious.  It was savory, flavorful, and delicious.

The sauce was creamy, aromatic, and buttery. 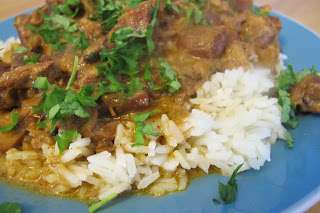 It was spicy and rich. 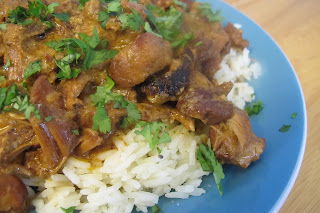 The chicken was tender with caramelized, golden bits. 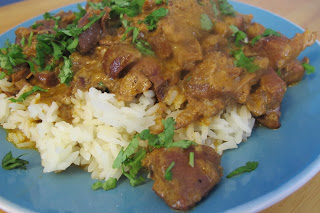 The tomatoes has sweetened and caramelized during the long cooking process.  The flavors had melded and the chicken had begun to break down. 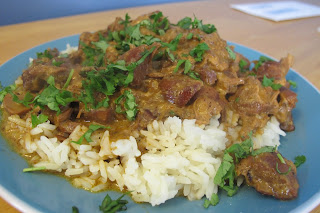 It was a fantastic and toothsome dish.

It was a toothsome and appetizing dish. 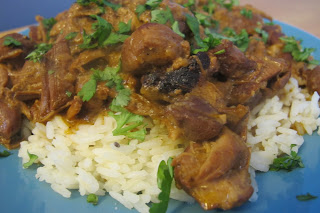 I would make this dish again.  I give it two enthusiastic thumbs up. 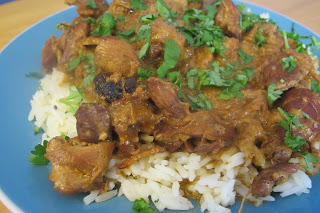