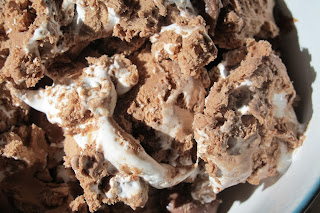 It has been very hot here recently.  It has been over 100 degrees yesterday and today.  I went on a run yesterday at 7:30pm.  I thought it would have cooled down a little by that time.  It may have cooled, but it was still blazing hot. 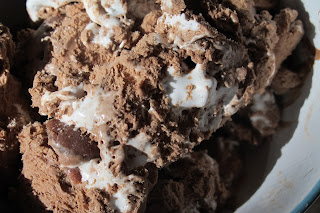 I had hoped to run a few miles, but I puttered back to my apartment only after twenty minutes.  Running in hot weather is unpleasant. 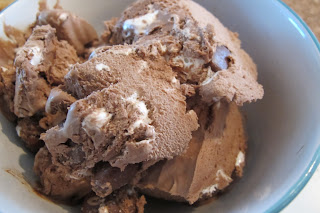 The good thing about hot weather is it is the perfect excuse to eat ice cream.  I never need an excuse, but ice cream is particularly satisfying in hot weather. 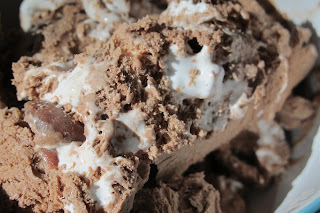 I made this ice cream a little over a week ago, and it is already gone.  This is a no churn recipe.  No churn ice cream is incredible.  It tastes exactly like ice cream.  It isn't as dense and rich as regular, high fat ice cream, but it is very delicious nonetheless. 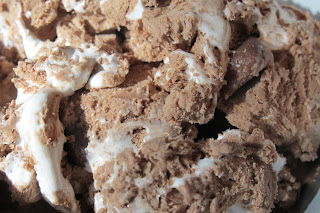 This recipe is based on a chocolate no church ice cream recipe from Food Network.  My favorite ice cream is Ben and Jerry's Phish Food.  That was my inspiration for this recipe.  I added marshmallow cream and Milk Dud's to the ice cream base. 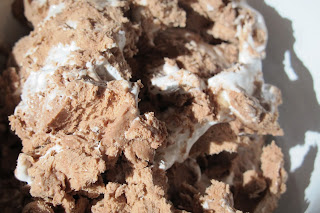 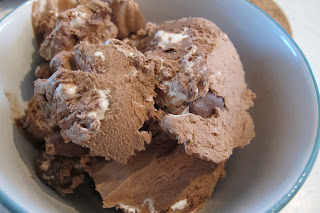 I whisked together the condensed milk, cocoa powder, vanilla and salt.

In another bowl, I whisked the cold heavy cream until stiff  peaks formed.

I folded a cup of the whipped cream into the sweetened condensed mixture. 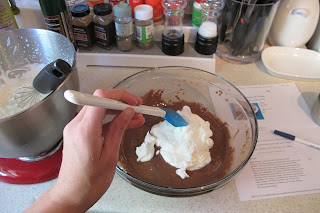 I then combined the lightened sweetened condensed and cocoa mixture into the remaining whipped cream. 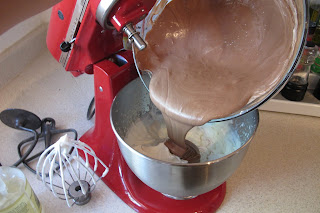 I stirred the ice cream base together until there were no white streaks. 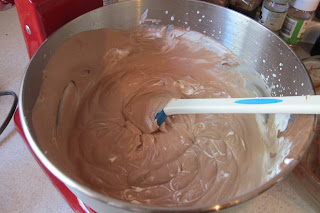 I stirred in the Milk Duds. 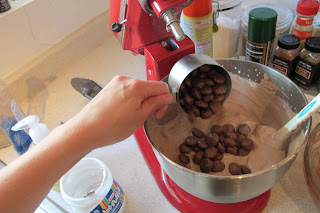 I scooped the ice cream  mixture into freezer safe tupperware.

I let the ice cream cool in the freezer overnight to firm and set.

This ice-cream was outstanding.  It chocolate flavor was rich and deep. 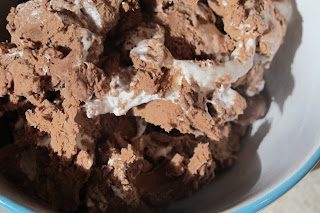 The marshmallow cream was light and sweet.  It was still soft and sticky when cold from the freezer too.

The texture of this ice cream was incredible.  It was creamy, smooth, and cold. 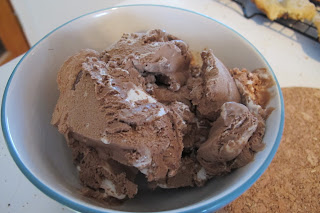 The frozen Milk Duds were not amazing.  The caramel in the candy became too hard.  I broke them  up with my teeth.  I should play around and see what caramels stay soft when frozen. 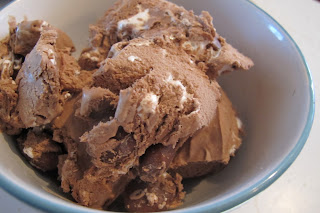 The caramel, marshmallow, and chocolate combination was scrumptious.  It was luscious, sweet, and decadent.   I wish I had a bowl right now.

Running in hot weather is horrible, but I'd make it through if I had this ice cream waiting for me! Not that I need any excuses to eat ice cream either. :)

I love the flavor combination here and can't wait to see what caramel substitute you make for the Milk Duds.

This yummy ice cream is the perfect treat to cool down with on a hot day!

I love the hot weather, but yes, it is a lot to exercise in it. This ice cream will surely cool you off.