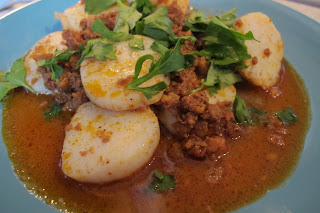 I'm posting this recipe from Belize!  I wrote the post the week before coming, so I can't really say how the trip is going.  I'm sure I'm having a wonderful time. 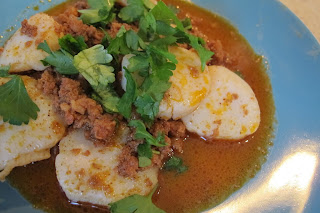 I haven't cooked with scallops much.  Scallops are salt water clams.  Scallops can produce pearls, but the pearls are often dull.

The scallop shell is an emblem of the apostle James.  Medieval pilgrims on the way to Jame's shrine would wear a scallop shell.  It is also an ancient symbol of fertility. 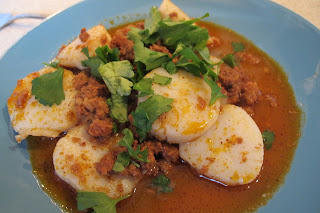 The ingredients for this recipe are 4 ounces chorizo, 1 pound scallops, juice of half a lemon, and 1/4 cup chopped fresh parsley.  I cut my scallops in half because they were thick.  Nigella used a firm chorizo that she cut into slices.   My chorizo was loose.  It tasted great, but was less ascetically pleasing.

I browned the chorizo in a hot skillet.  It became brown and crisp. 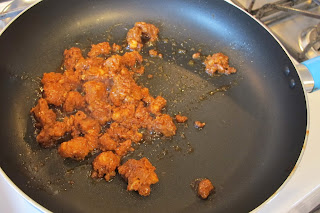 After the chorizo was cooked, I removed it from the skillet.  I left the fat in the pan.  I fried the chorizo in the grease.  I cooked each side for a minutes. 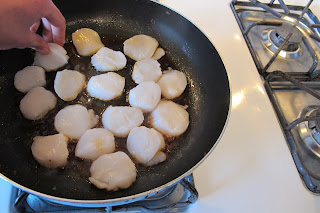 After a couple of minutes, I added the chorizo back into the skillet.  I added the lemon juice and let the sauce bubble for a few second.

I garnished the chorizo with fresh parsley.

This was scrumptious.  Chorizo is flavorful and sumptuous.

The scallops were tender.  They became infused with the spice and heat of the chorizo.

The scallops and chorizo had disparate flavors, but they complemented each other well.

It was decadent and rich dish.  The parsley added freshness and lightened the flavors.  It was a full-flavored and pleasurable dish.