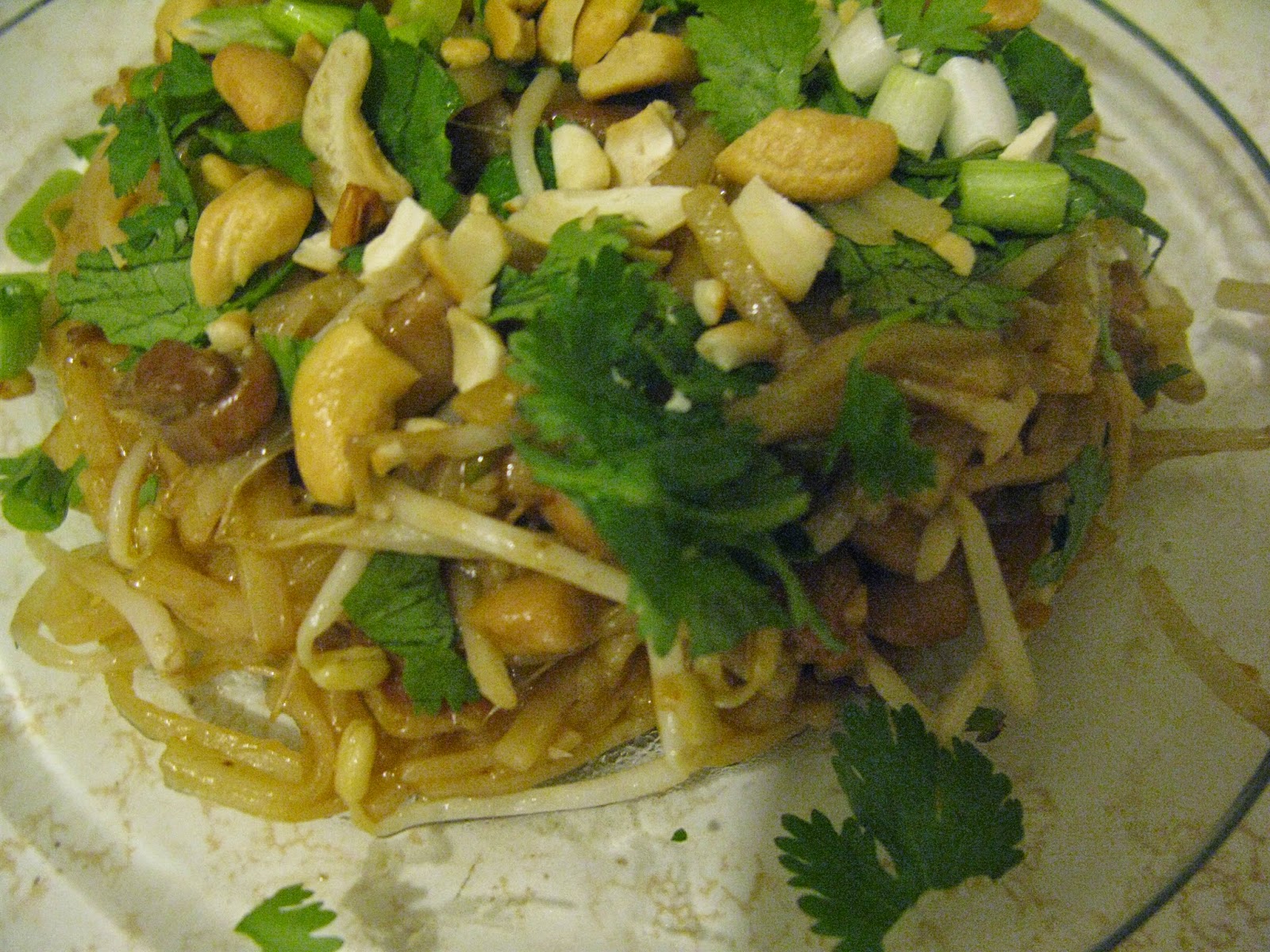 Happy Veteran's Day!  I hope you do something special to commemorate the day.  I might end up commemorating Veteran's Day by staying in bed and nursing my sore throat.  I am feeling under the weather. I have wanted to make Pad Thai for a while, but all the recipes require tamarind paste.  I looked at the grocery stores near me to no avail.  I visited a Korean grocery store while shopping at a thrift store with friends.  Among the unending row of sauces and pastes, they carried blocks of tamarind paste. 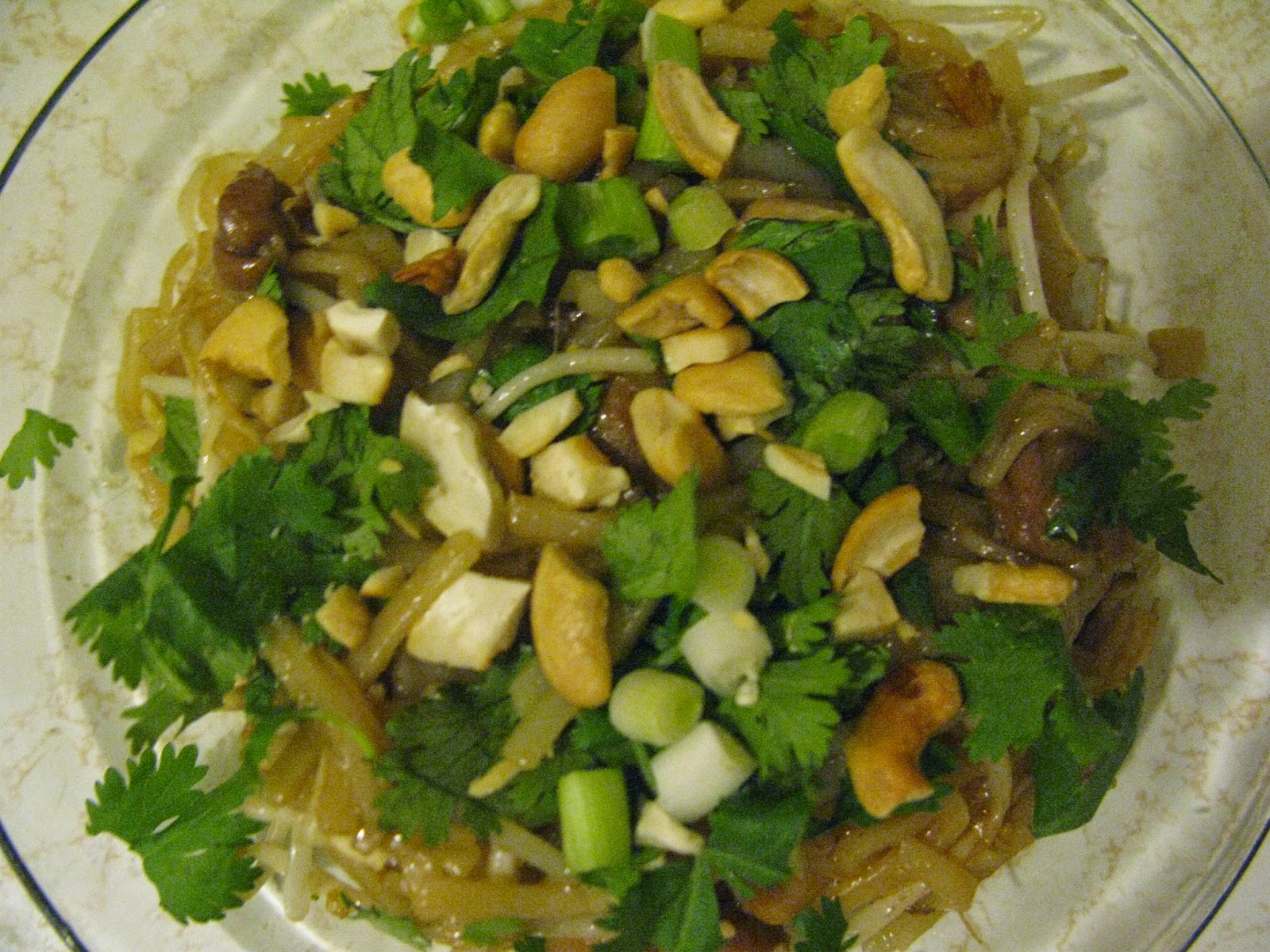 Tamarind paste come from a tree indigenous of the tropical areas of Africa, but it has been in cultivation in the Indian subcontinent for a long time.  The fruit is a pod three to six inches in length.  It is eaten throughout the world: Africa, China, the Caribbean, South America, Indian, and Southeast Asia.  It is an ingredient is Worcestershire sauce. I used a recipe from about food and made it as directed.  It is believed that Viet traders brought a stir fried rice noodle dish to the ancient Thai capital of Ayuthaya. 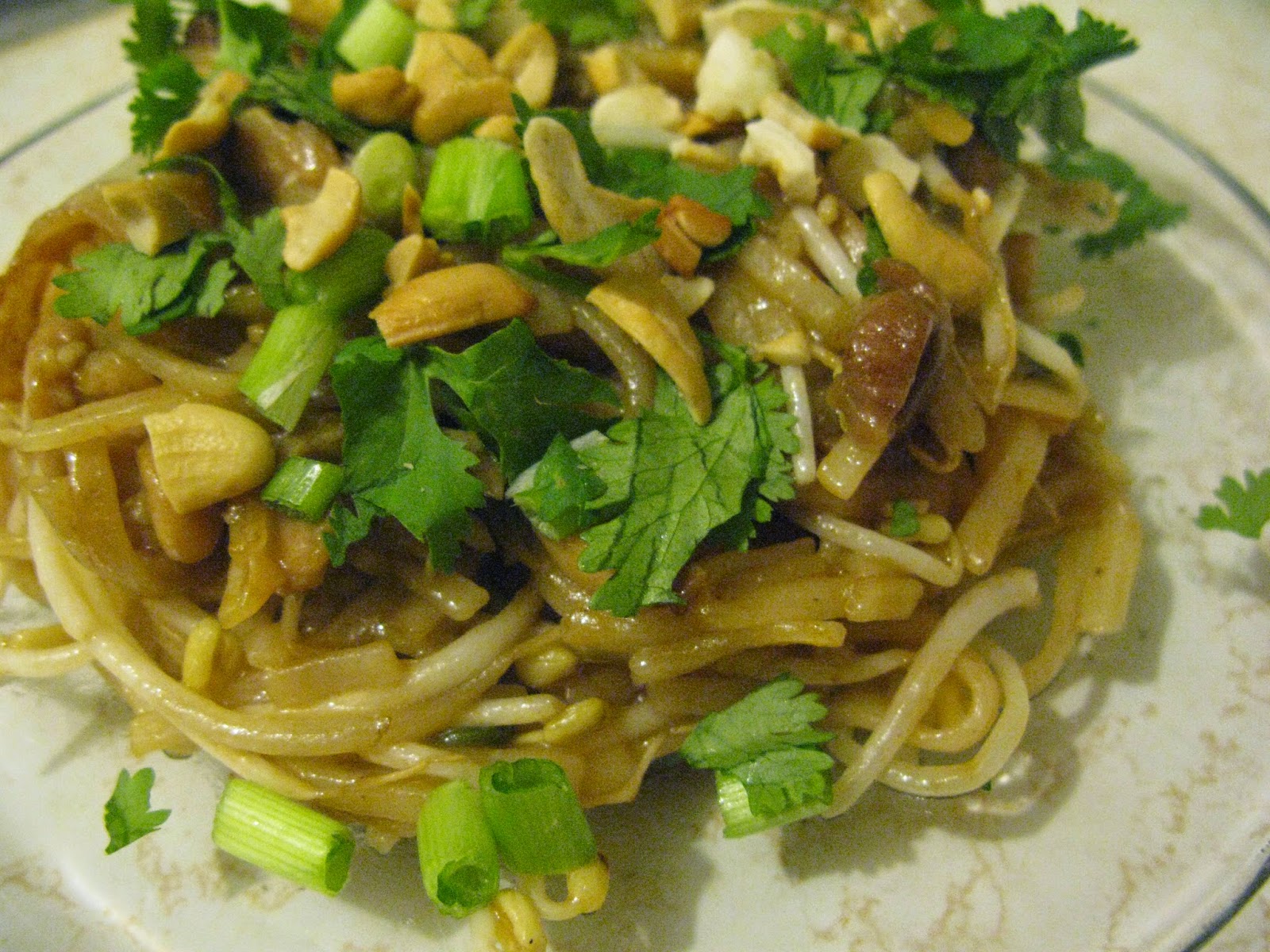 In the 30s and 40s a Thai Prime Minister wanted to westernize Thailand, called Siam, and lessen Chinese influence in his country.  To replace Chinese noodles, a new noodle called Pad Thai was created. 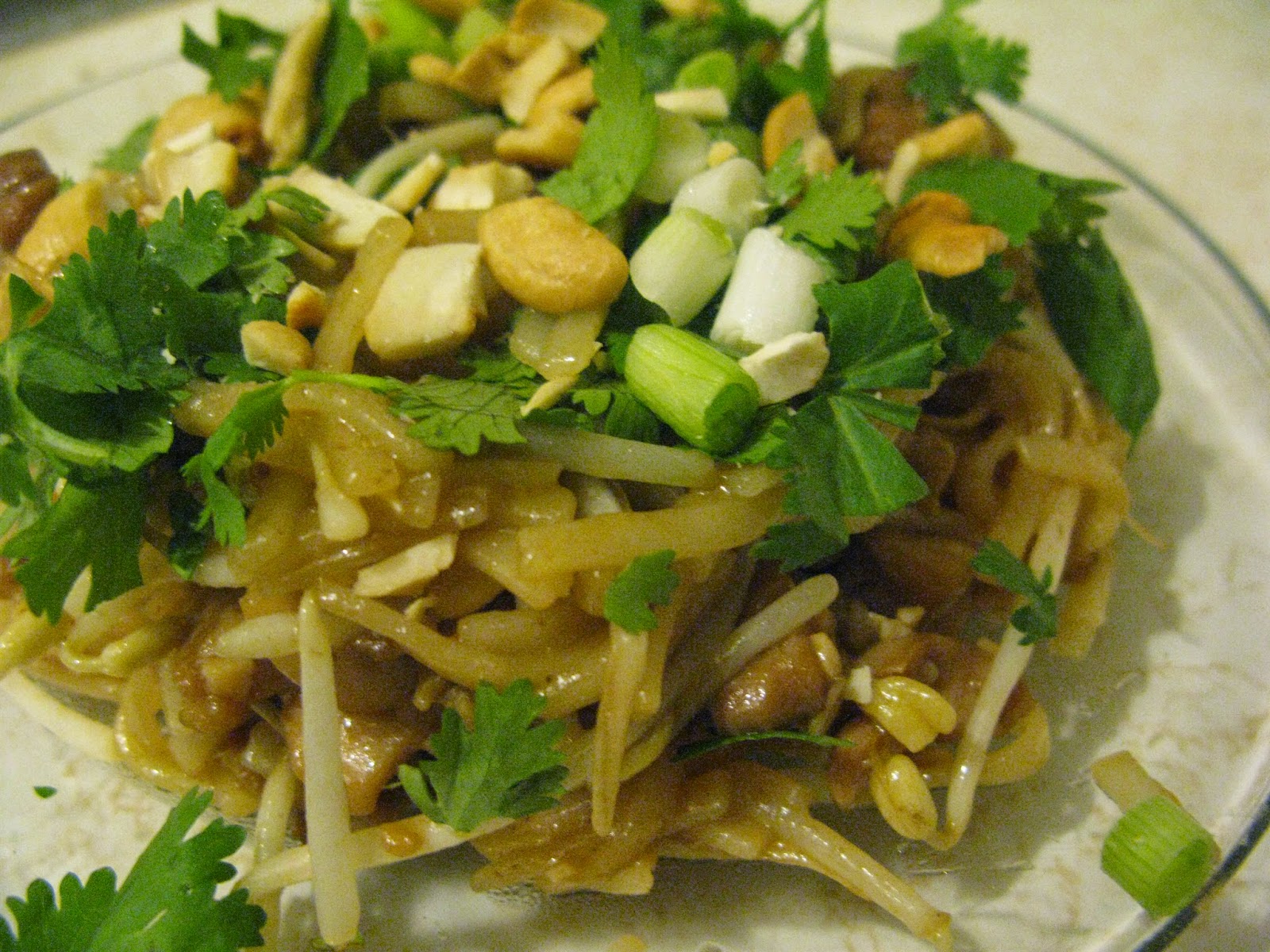 To make the sauce, I dissolved the tamarind paste in the warm water.  I added 3 tablespoons of soy sauce. 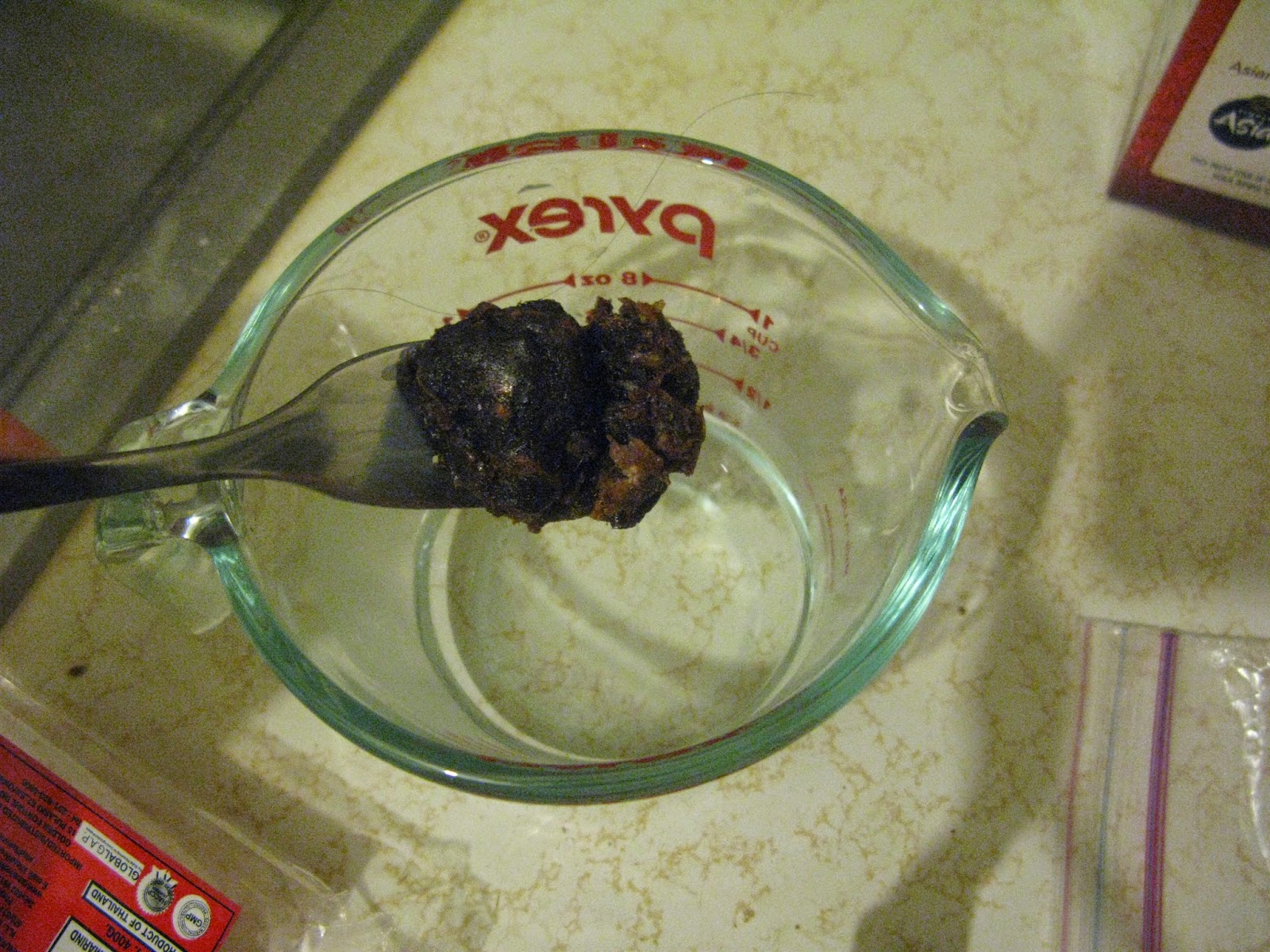 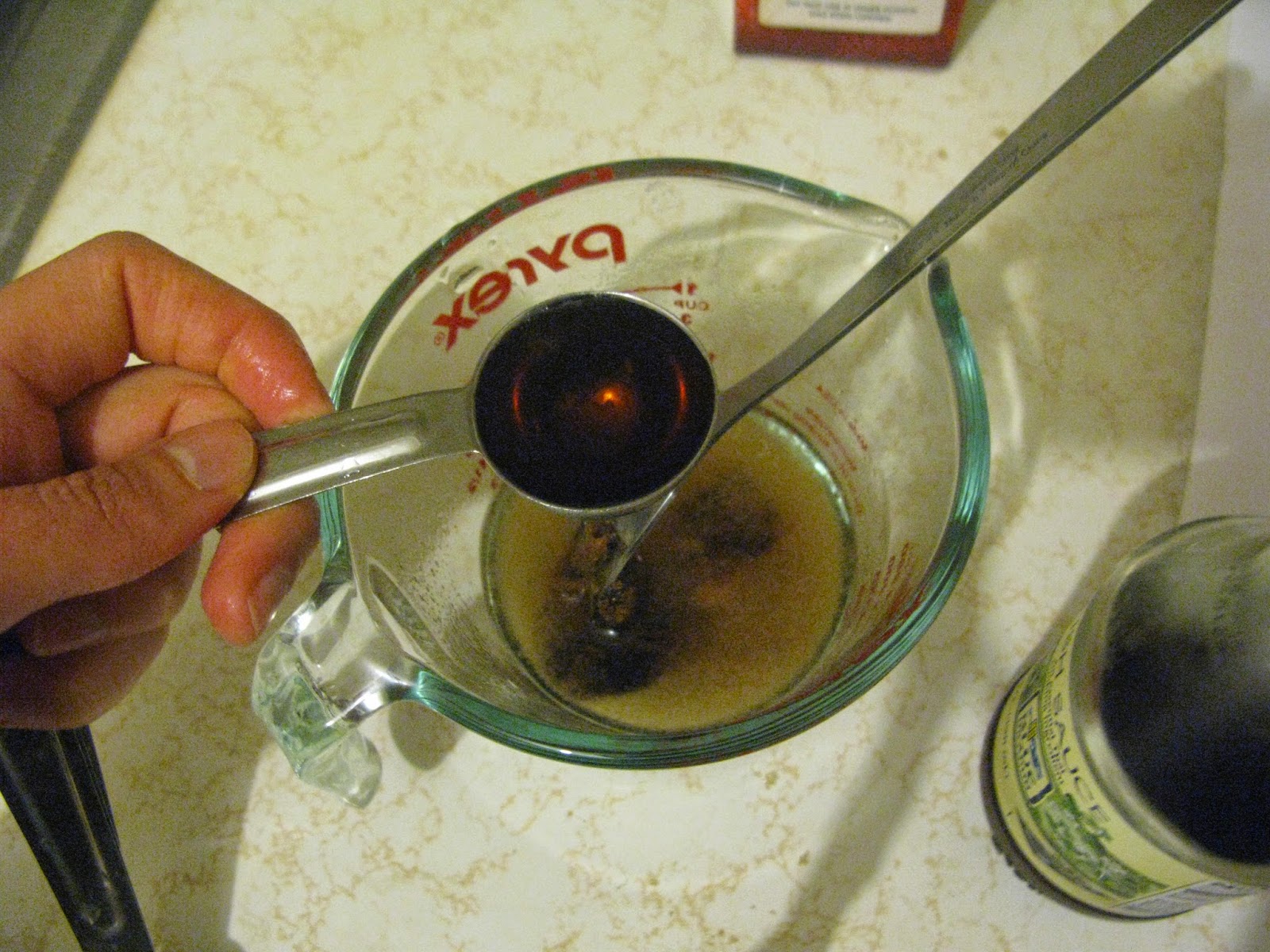 I added the chile sauce and brown sugar. 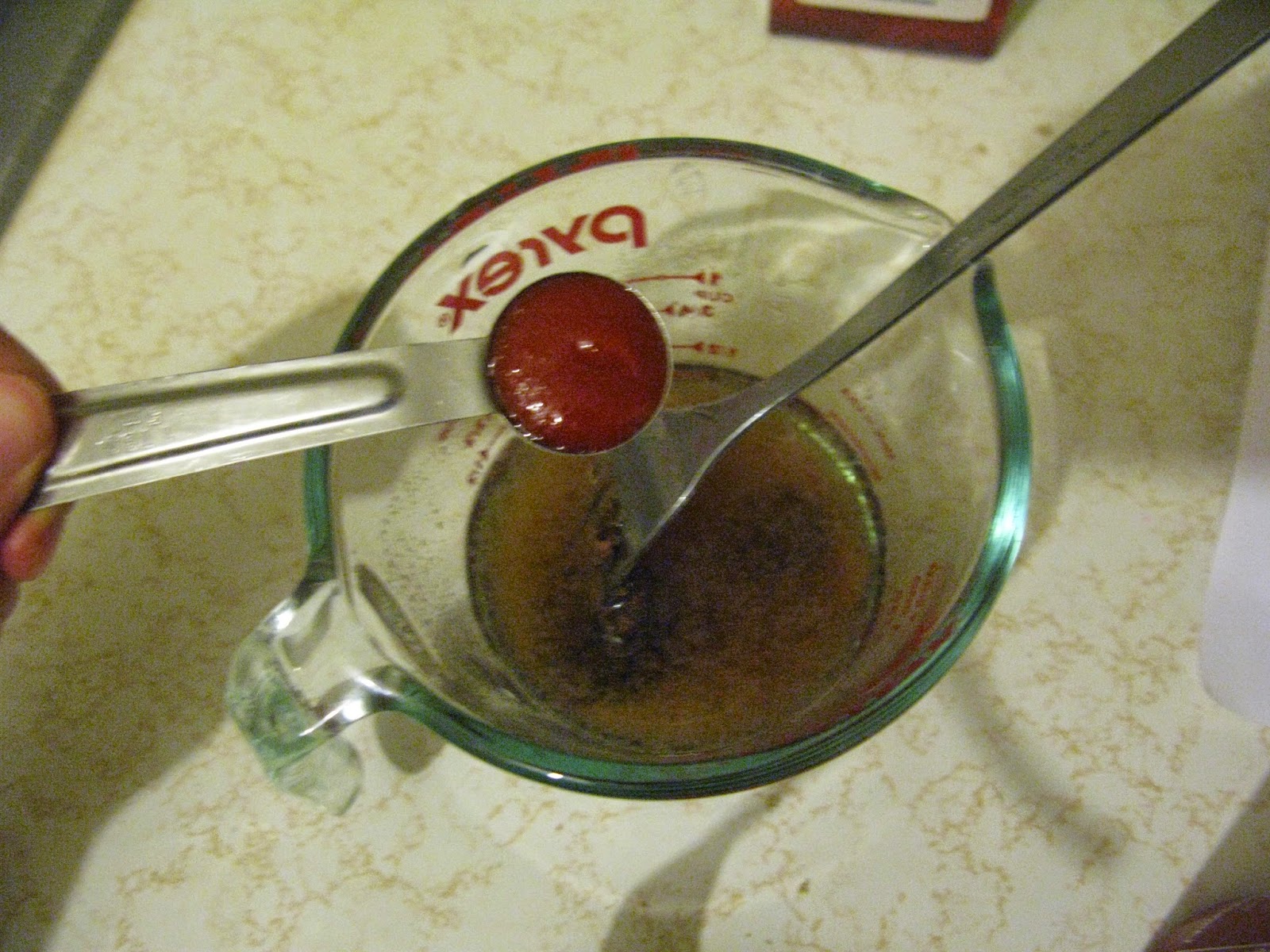 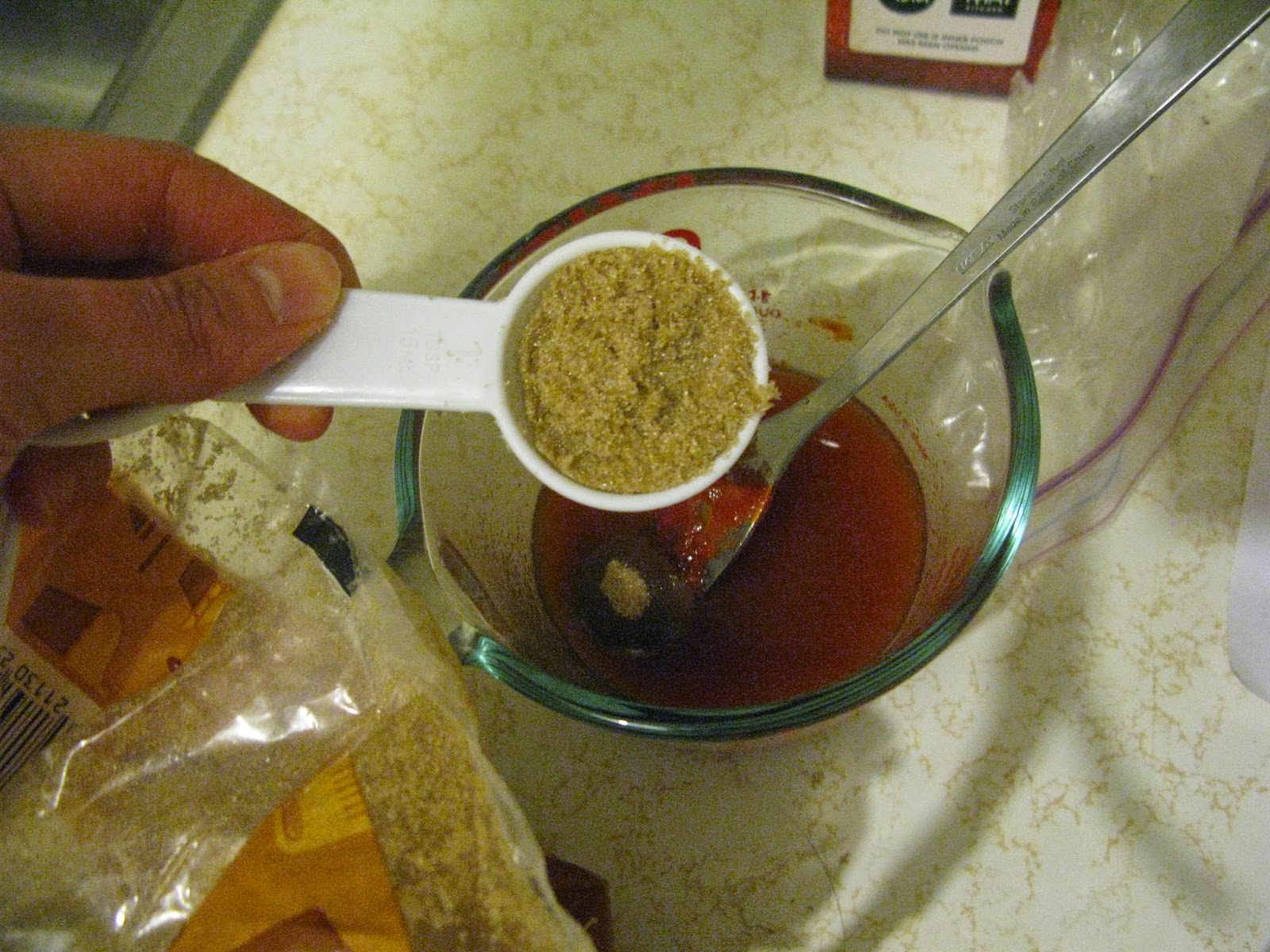 I cooked the noodles according to the packaged instructions.  They still had a little bit because they would cook more in the sauce. 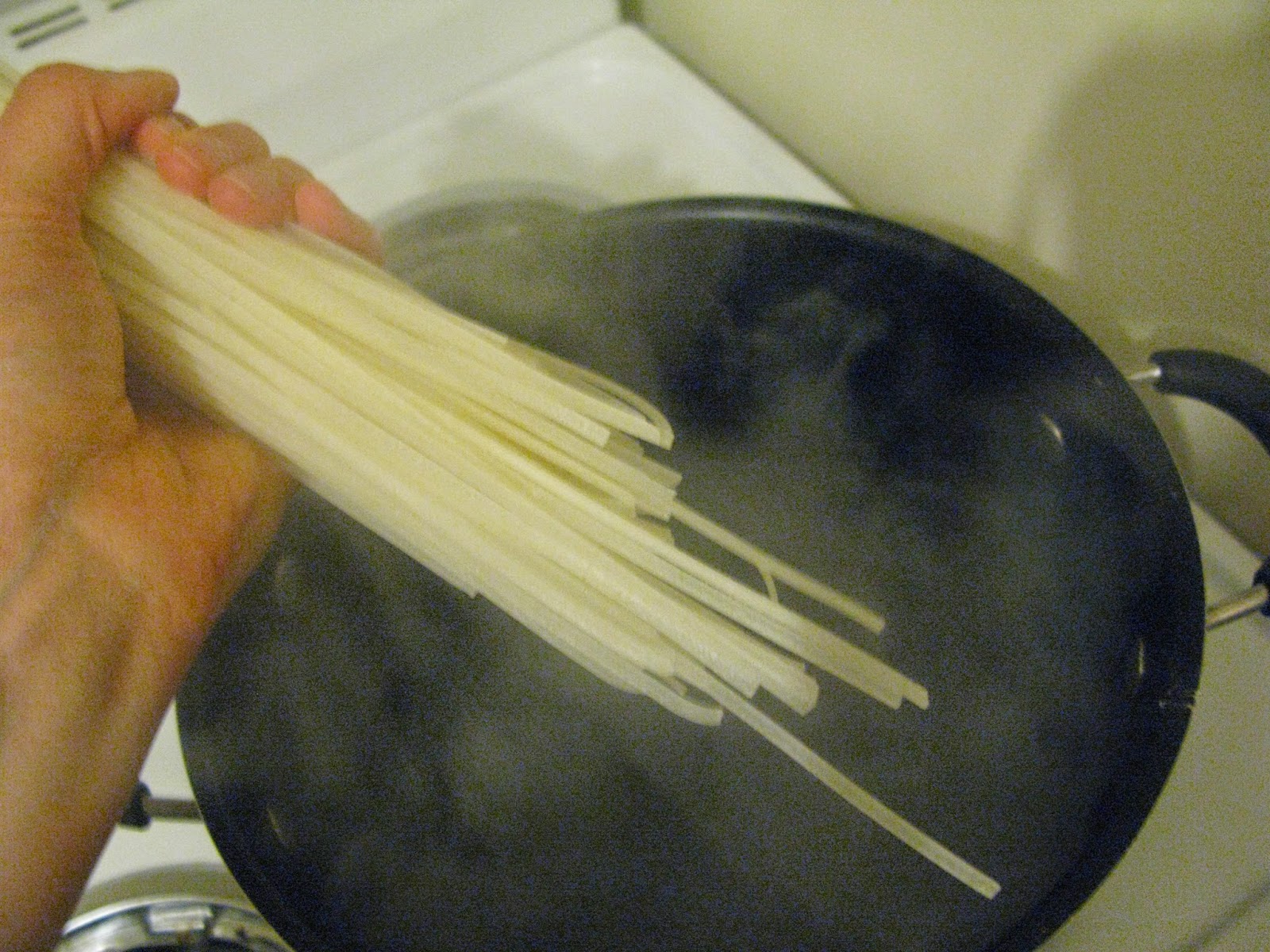 The marinade for the chicken is made with corn starch and 3 more tablespoons of soy sauce.  I put the diced chicken in the marinade and set it aside. 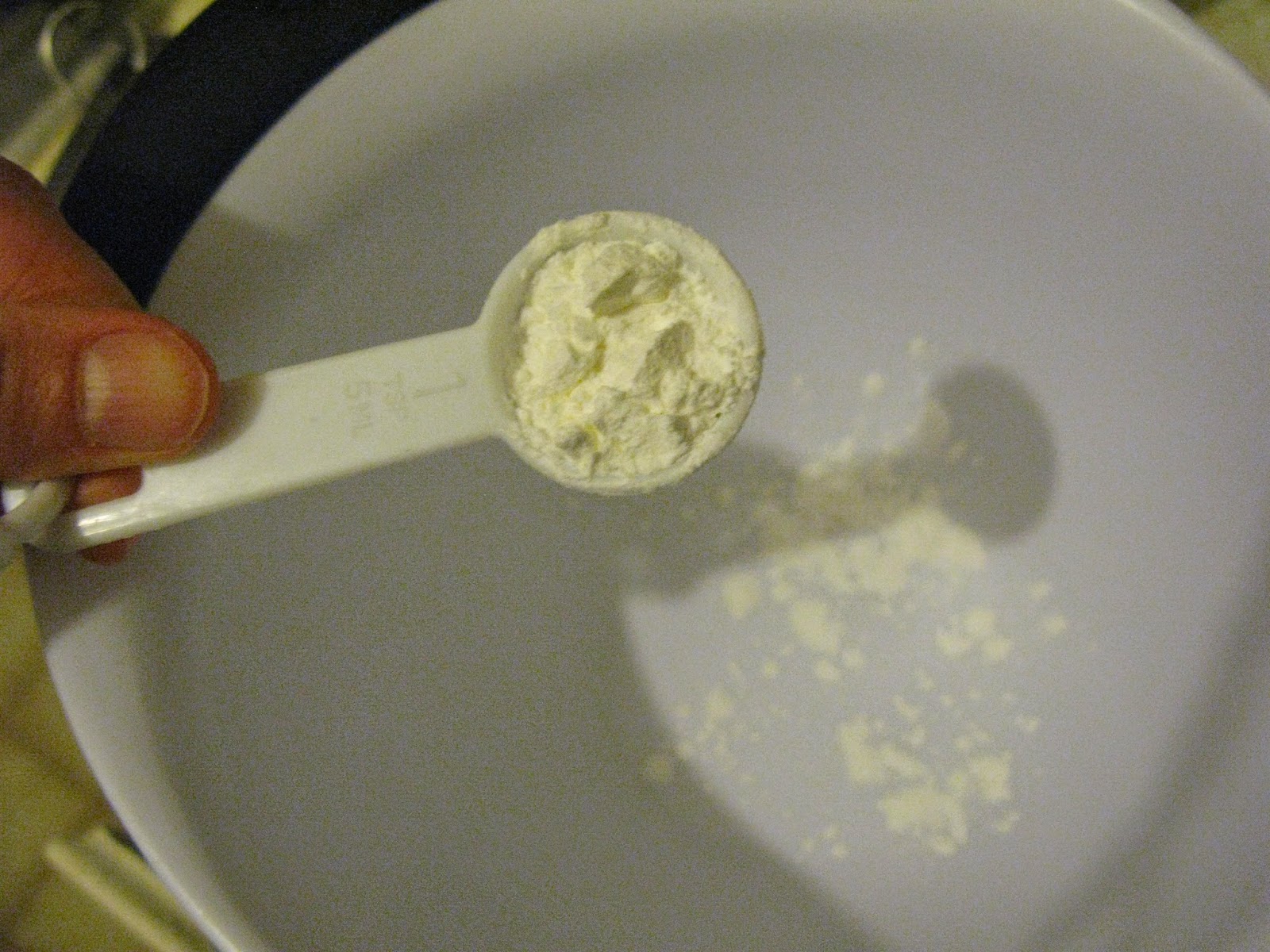 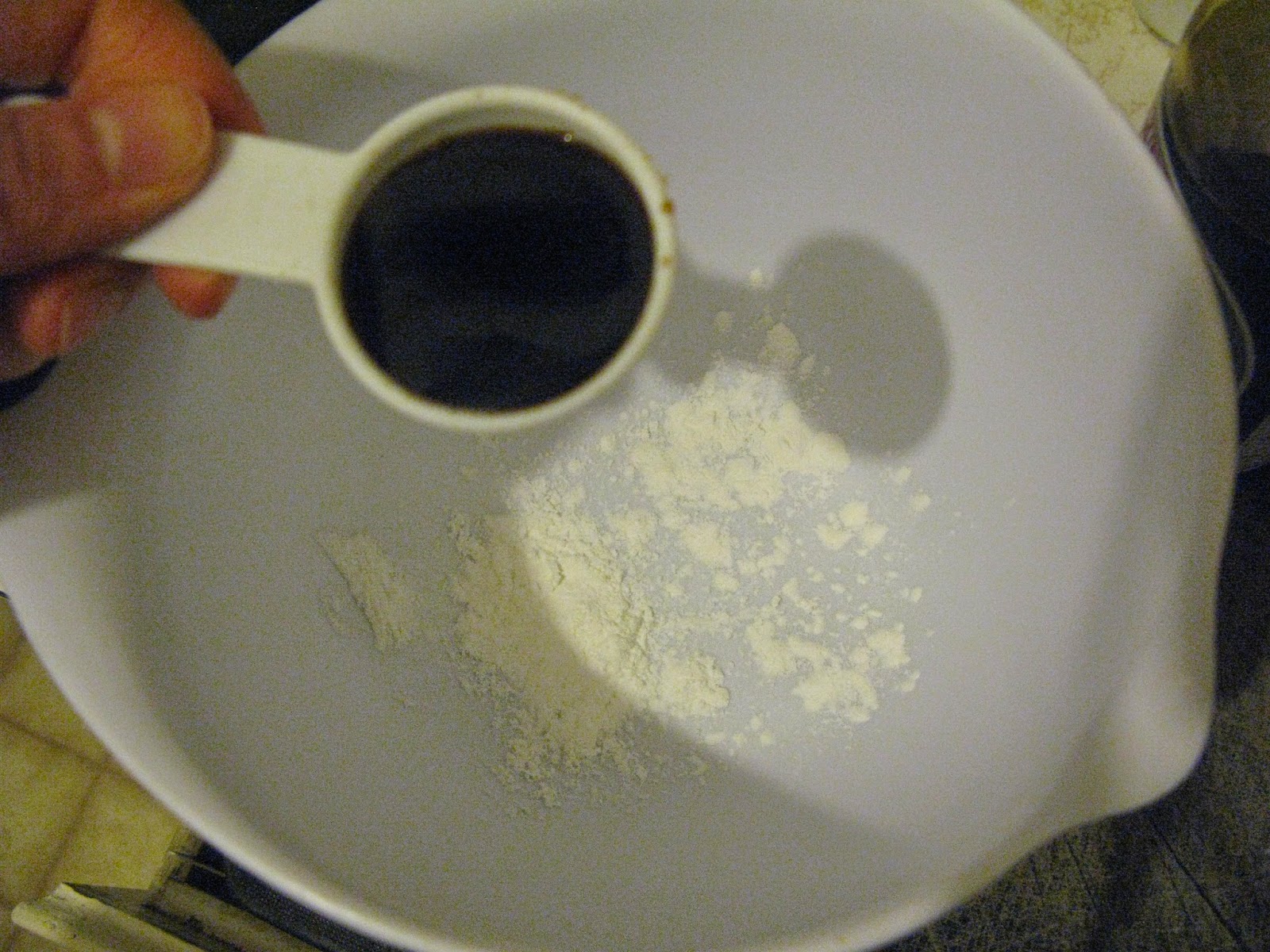 In a hot skillet with oil, I cooked the garlic for less than a minute. 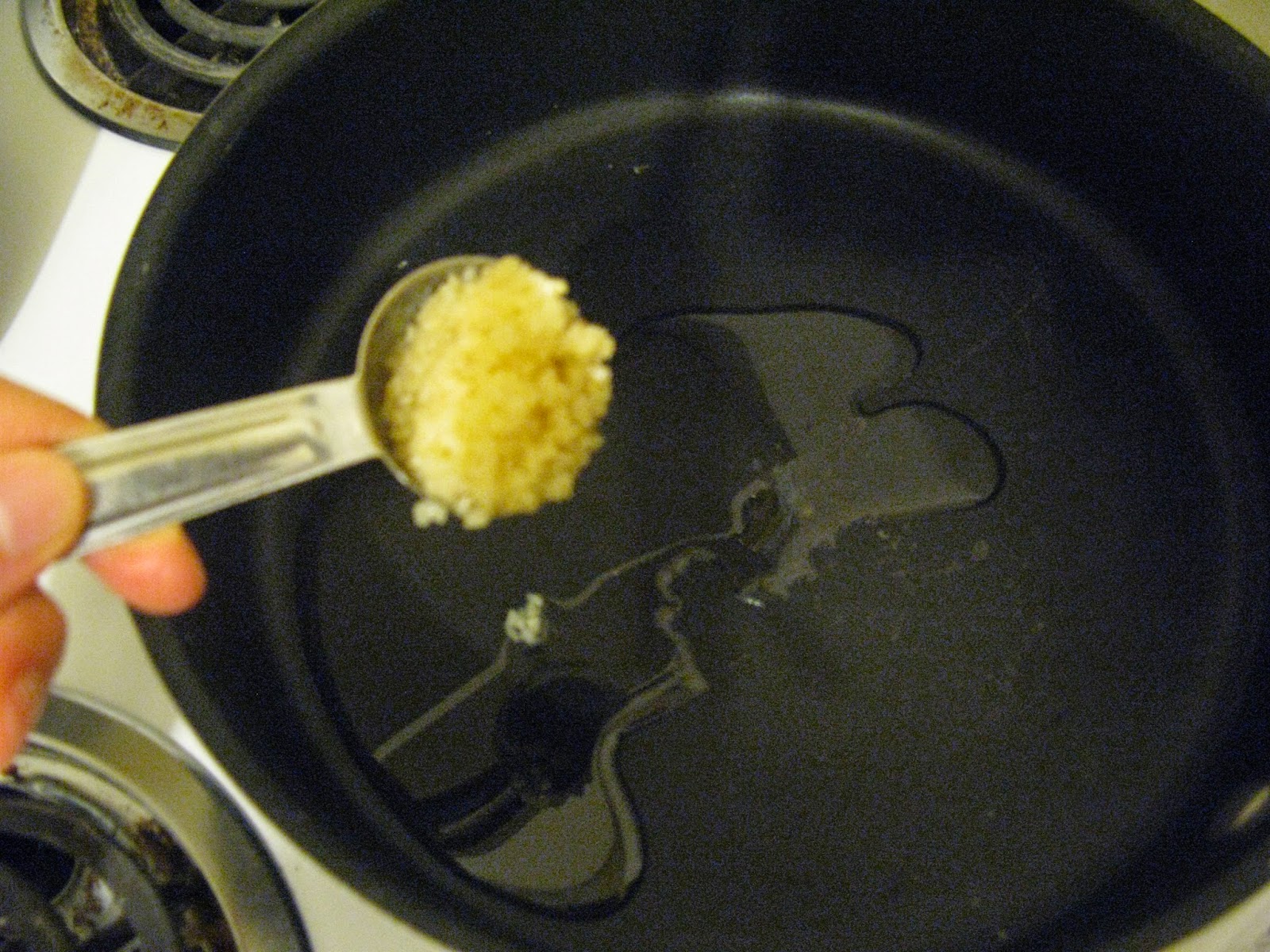 I added the chicken and marinade.  I cooked this for 5 to 7 minutes.  I added a tablespoon of broth each time the pan became dry. 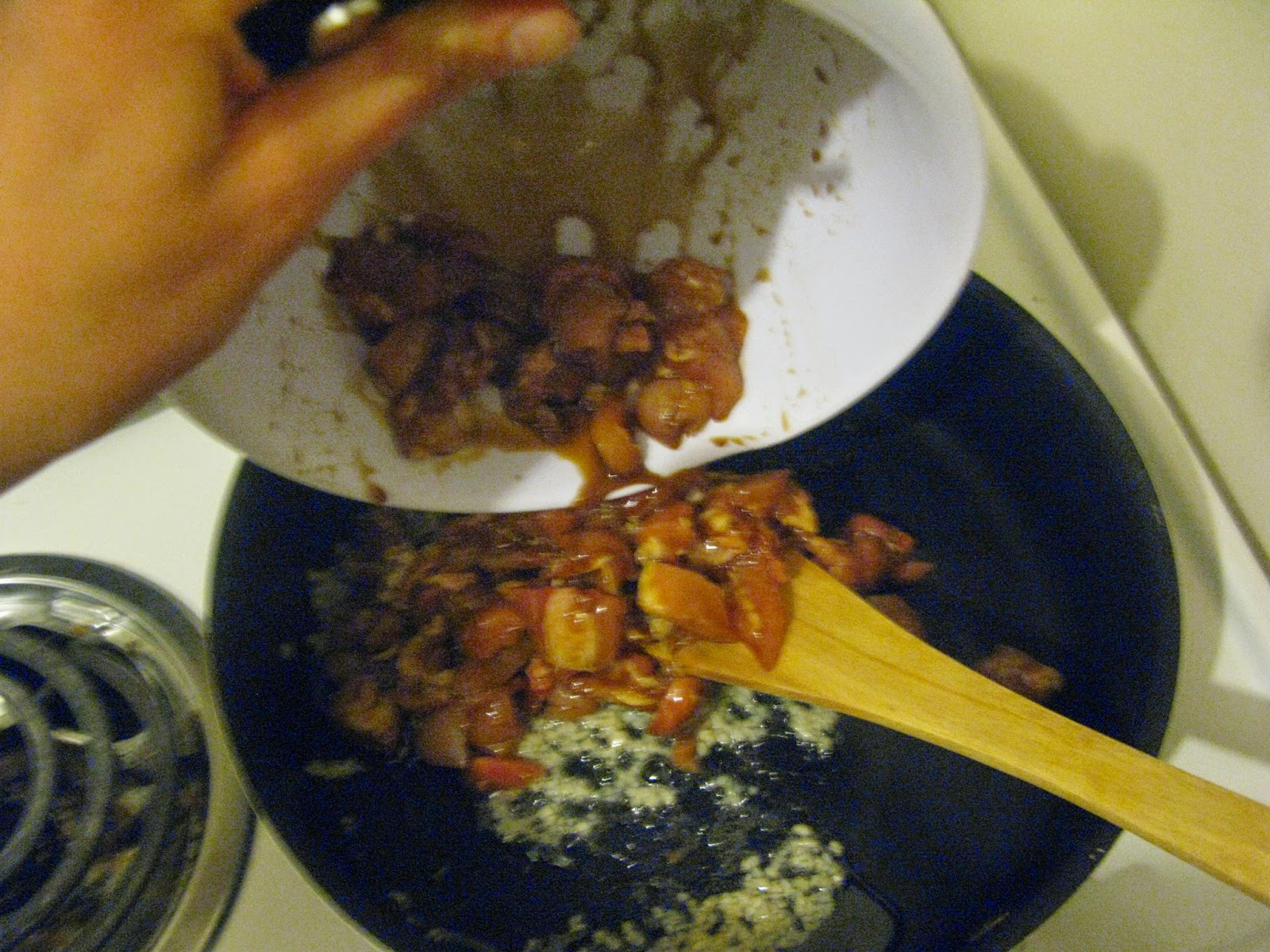 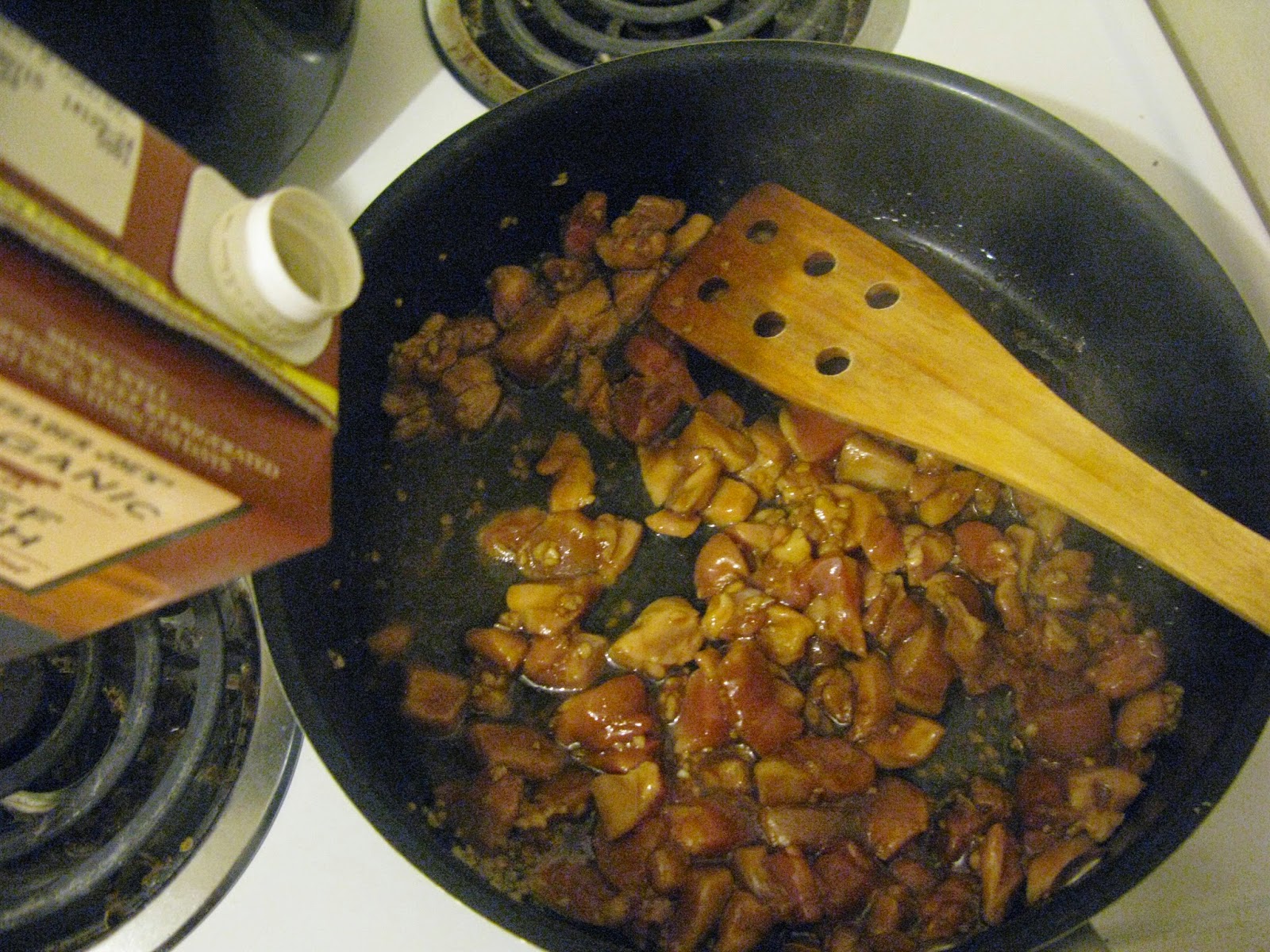 I added the noodles and the sauce. 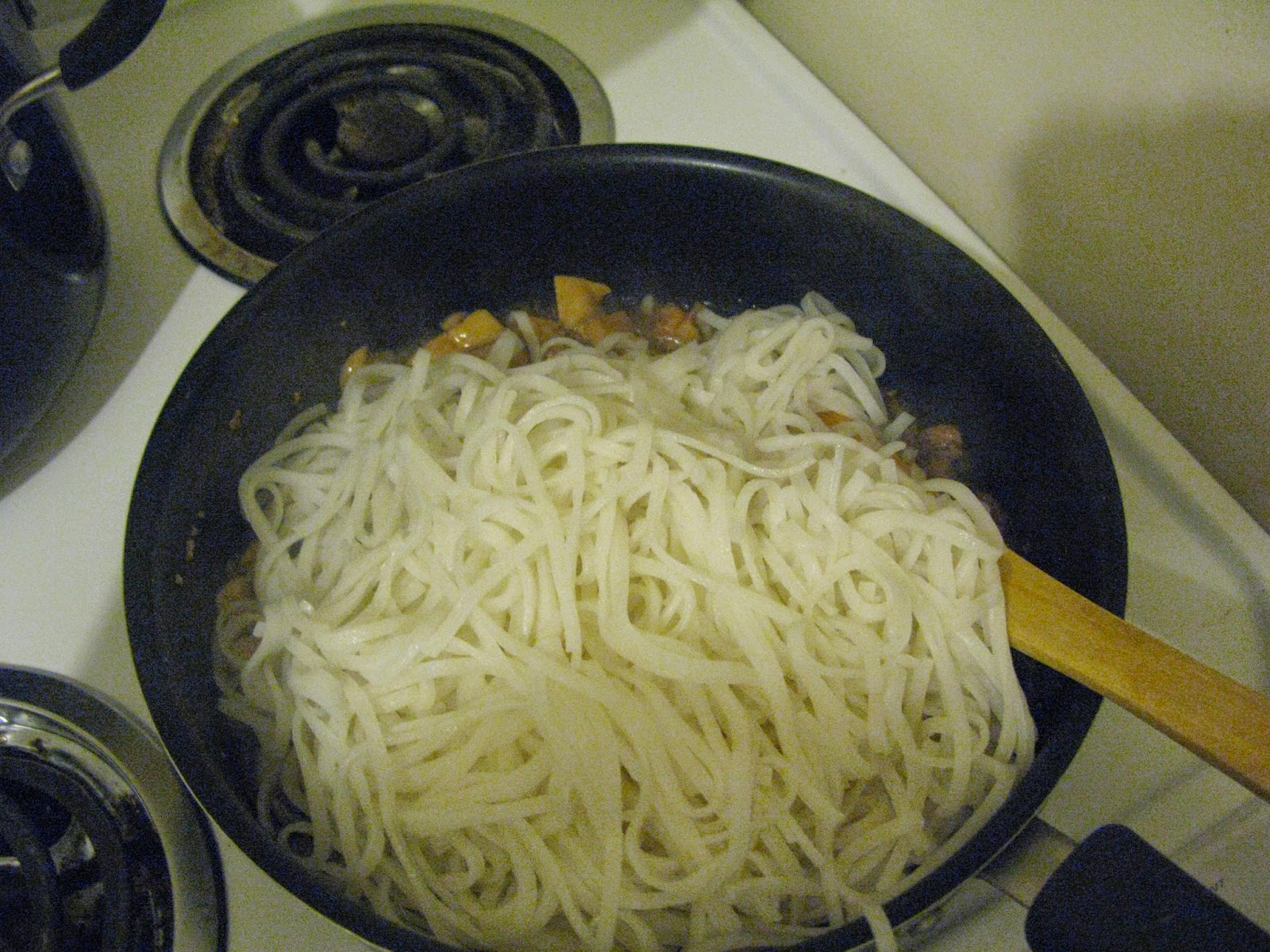 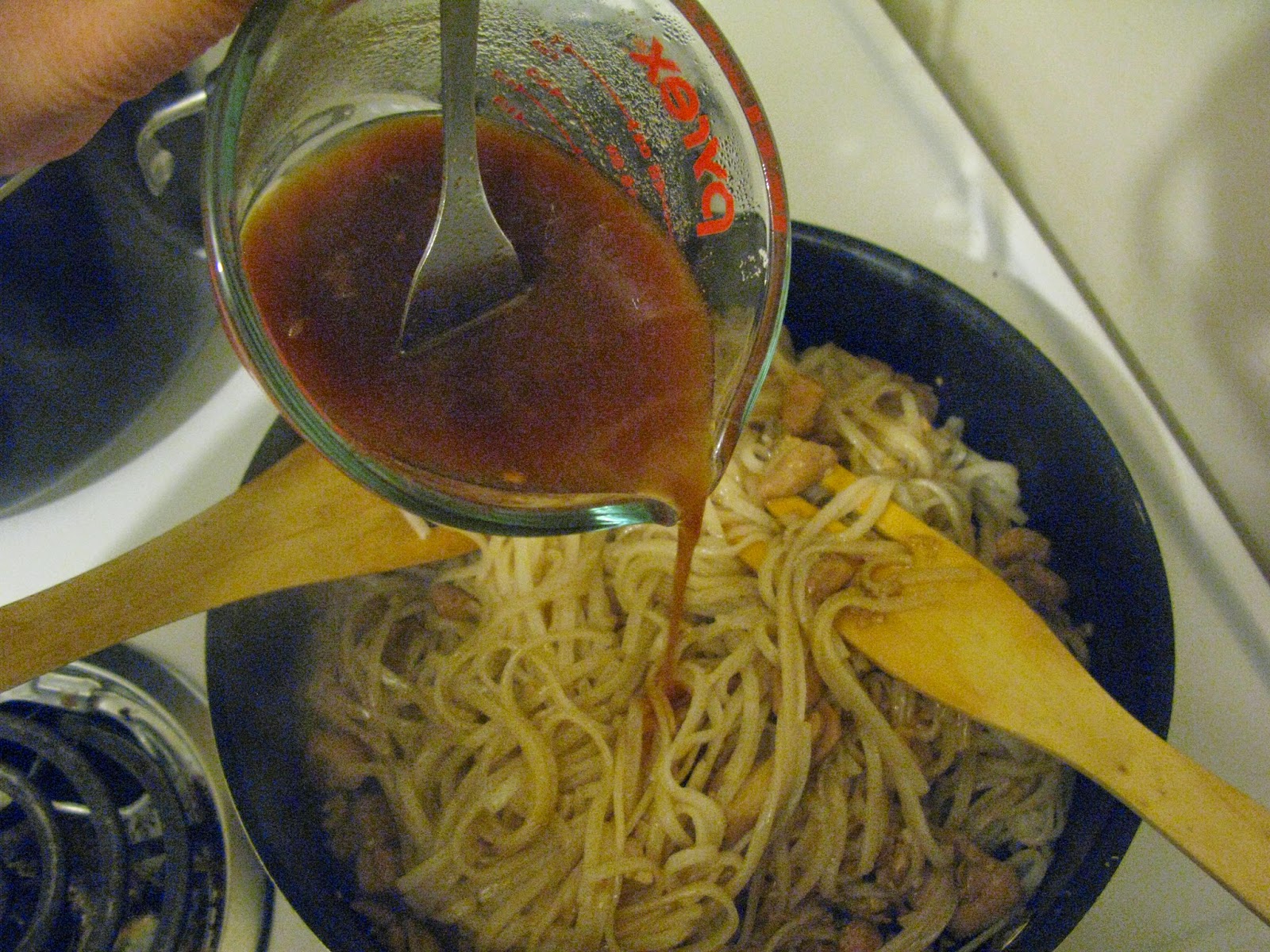 I stir-fried this for two minutes.  I used two utensils to lift and stir the Pad Thai, like you stir a salad. 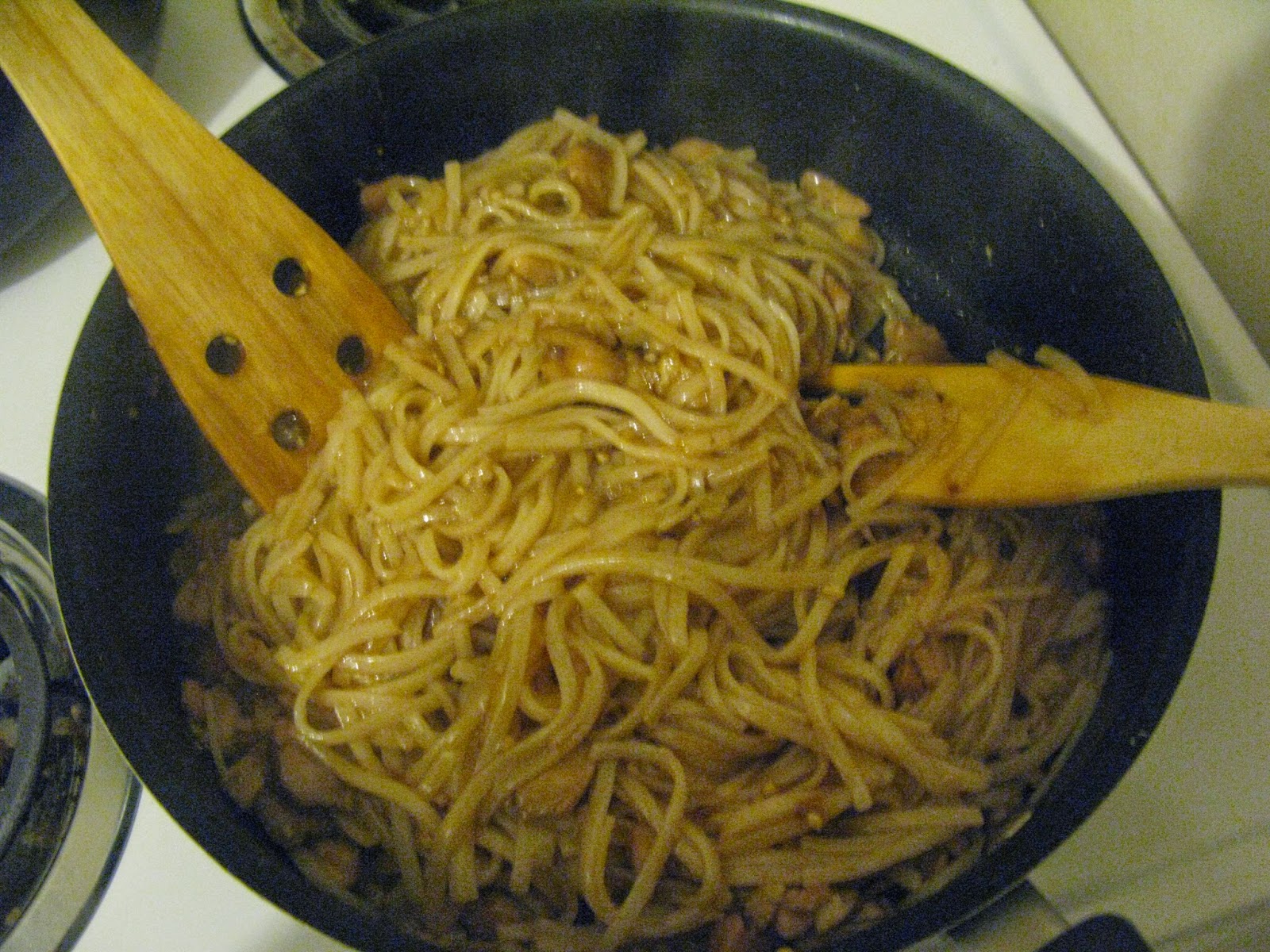 I added the bean sprouts and continued stir-frying the Pad Thai for another minutes. 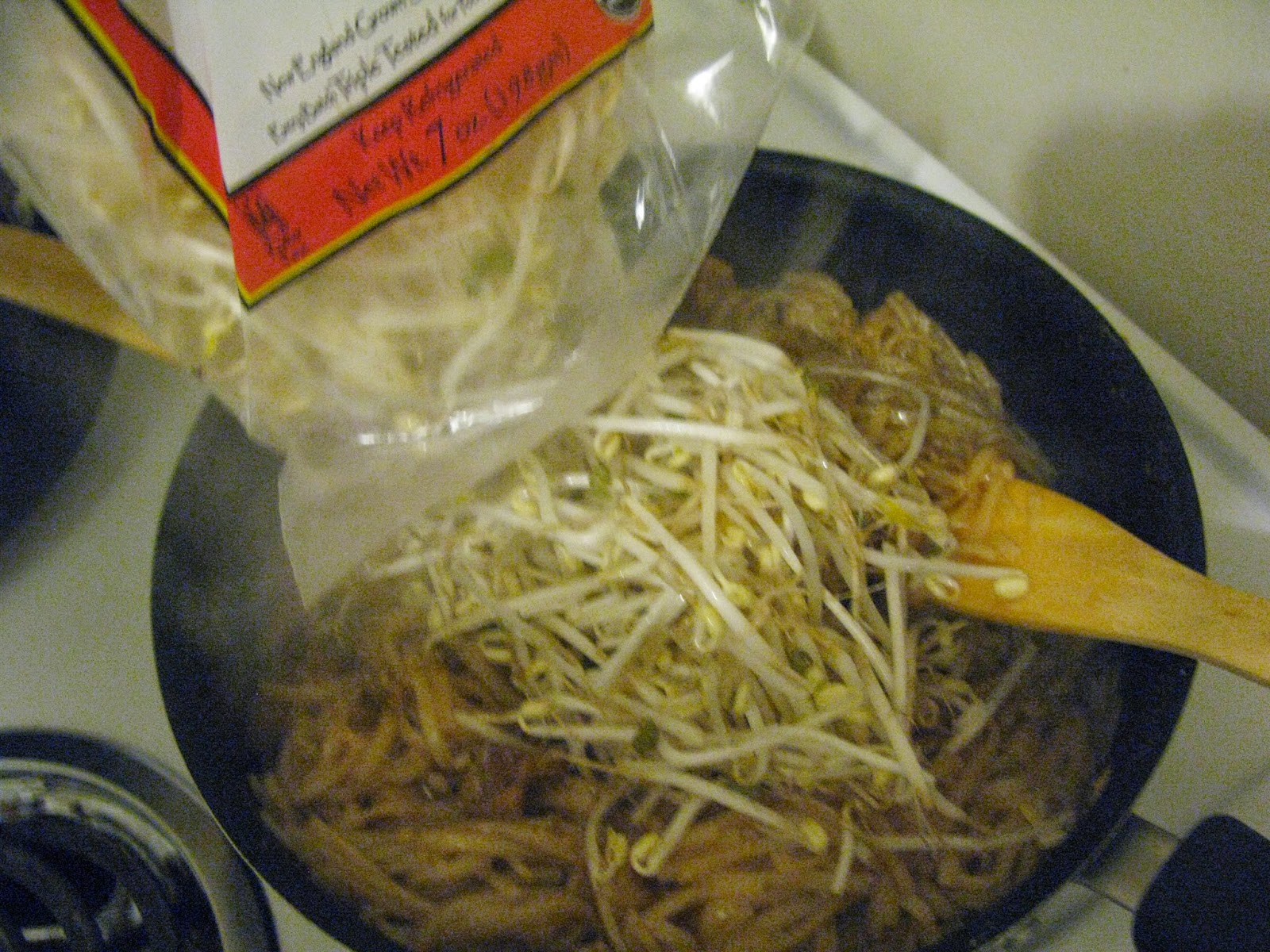 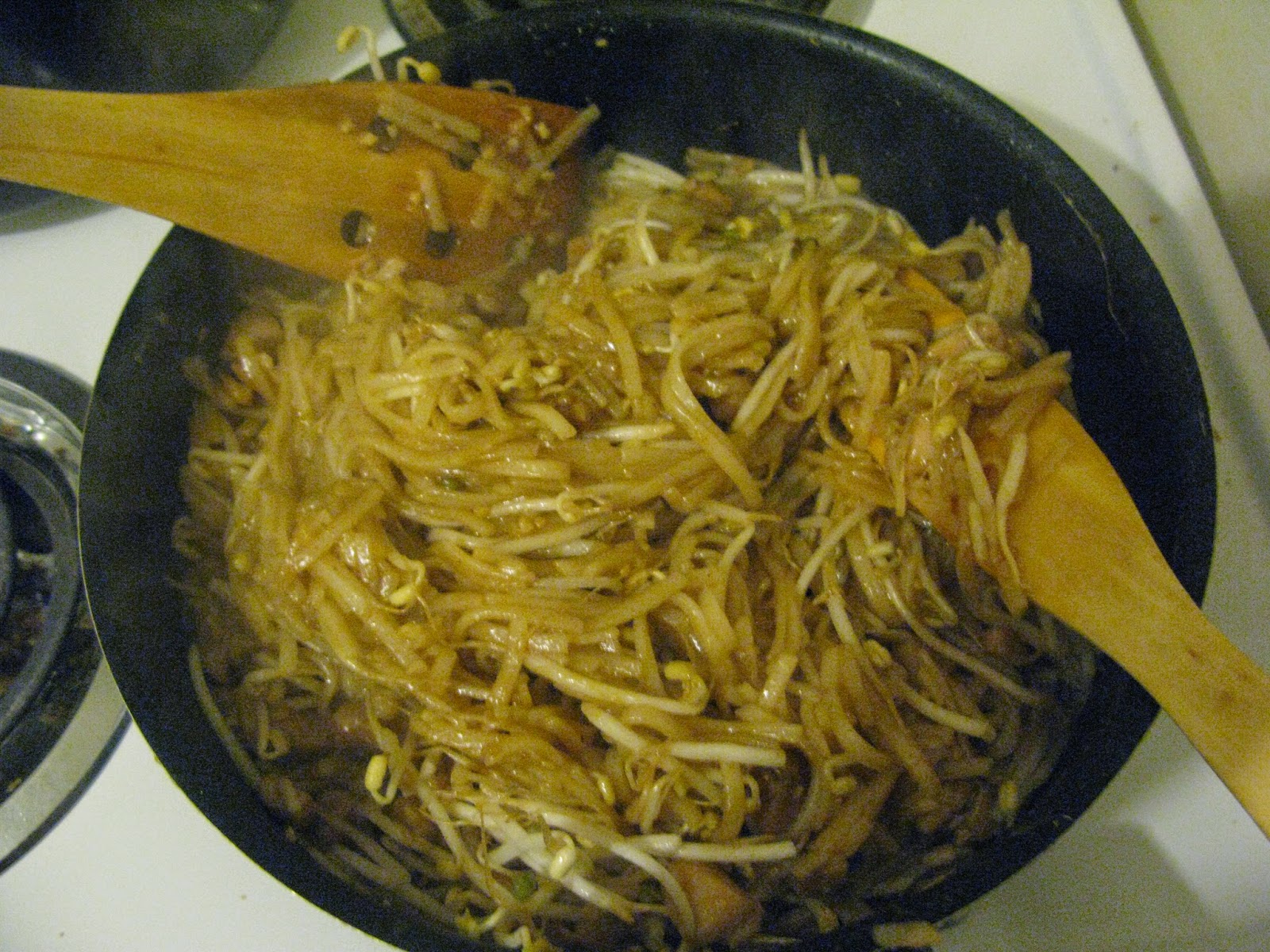 I garnished with cashews, green onion, cilantro, and a squirt of lemon. 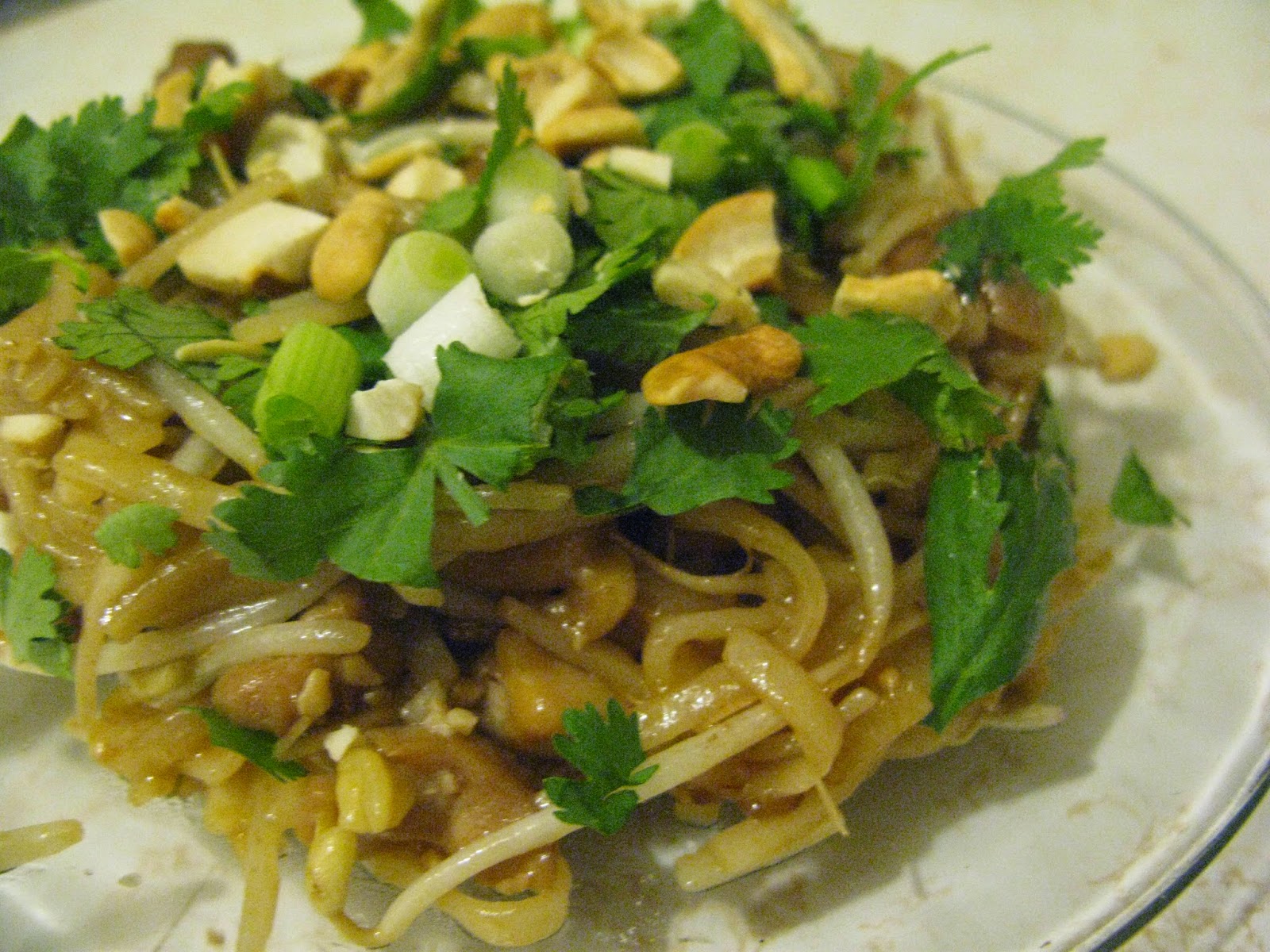 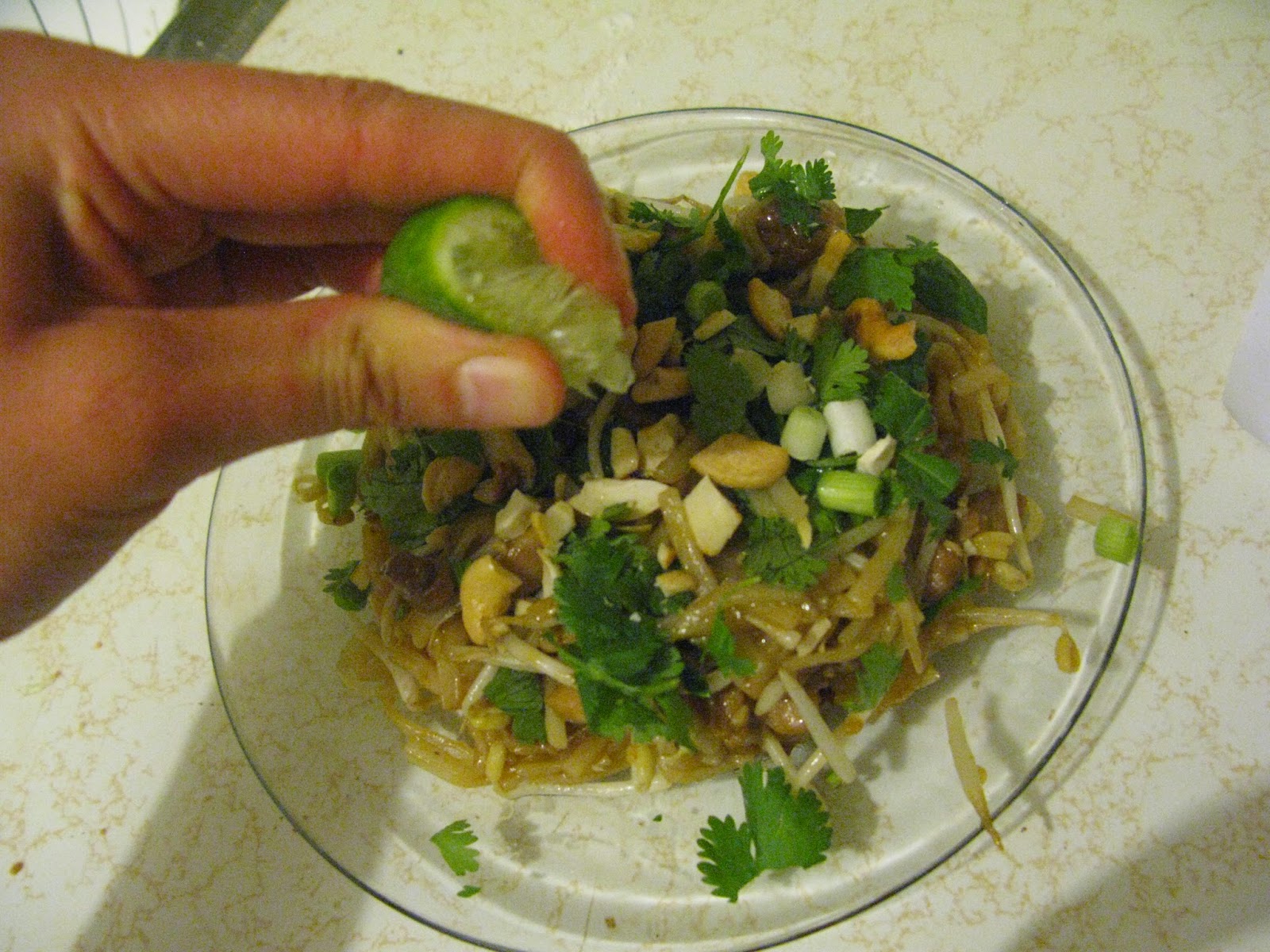 Pad Thai is one of my favorite dishes, and it didn't disappoint.  The noodles were not as crispy and fried as I would have liked because I didn't use enough oil. 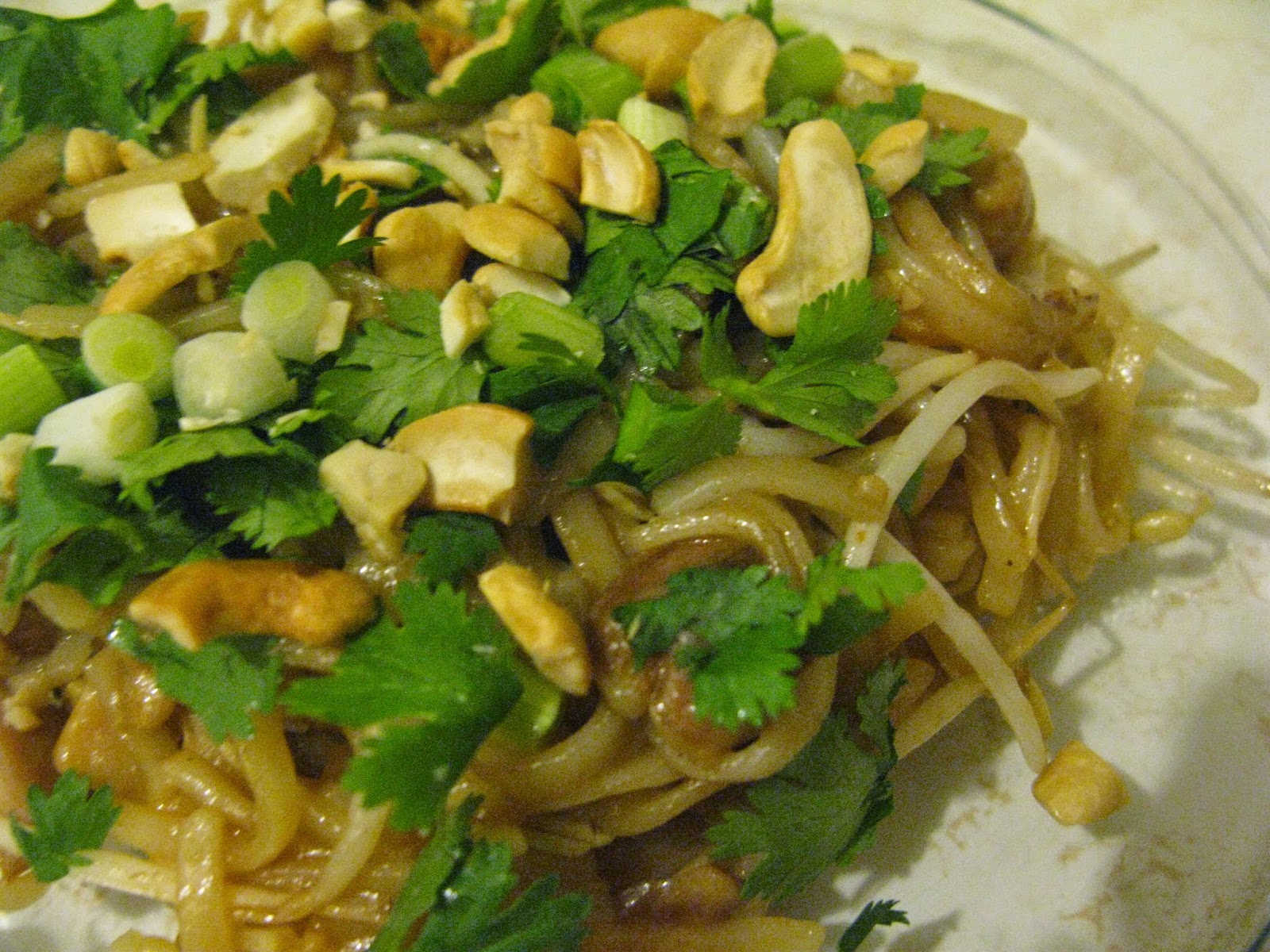 The flavors were fresh and fragrant.  There is sweetness from the brown sugar, saltiness from the fish sauce, and a little sour note from the tamarind paste. 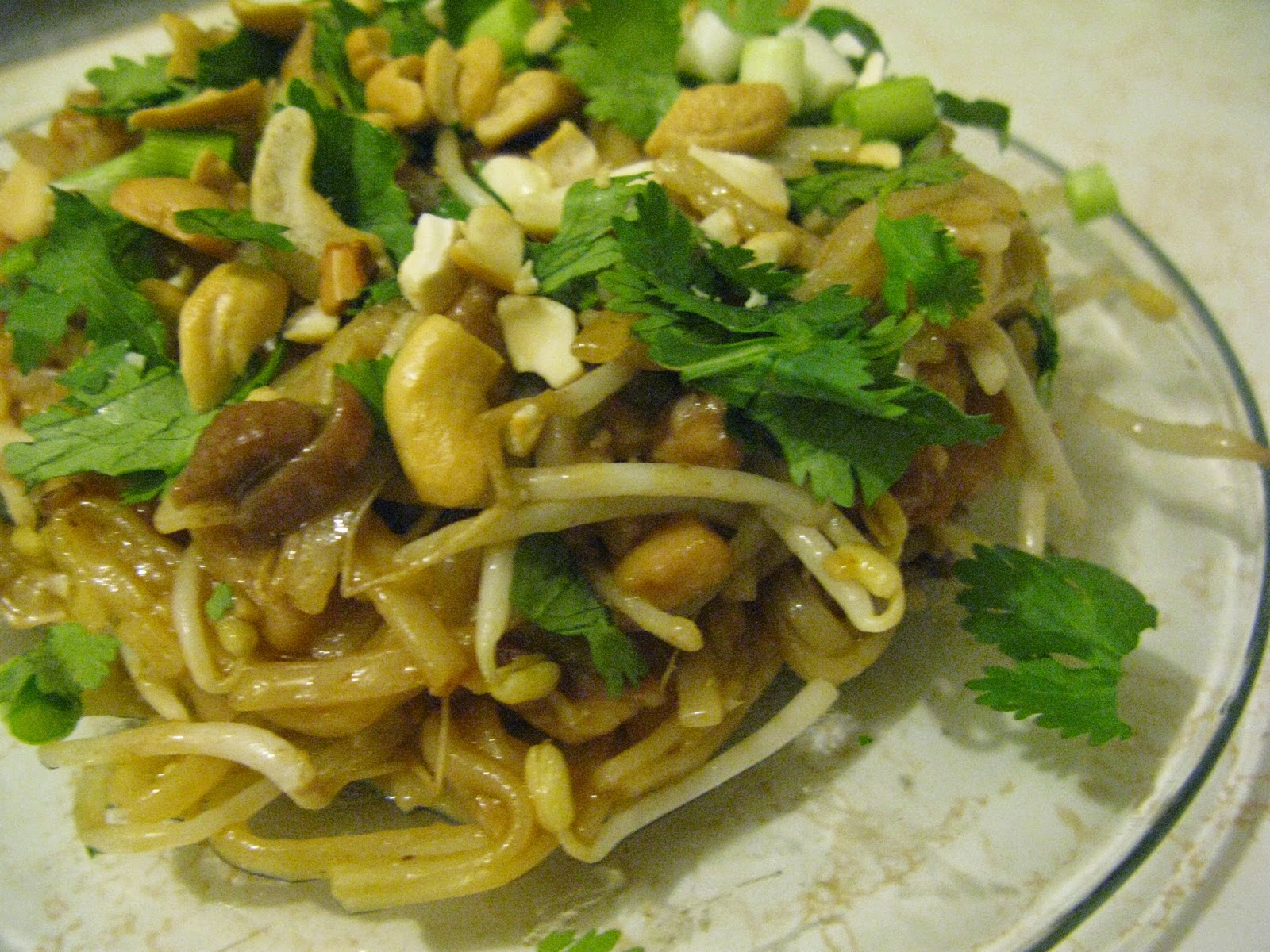 This is definitely best the first day.  The noodles were a little soggy the second day.  I am very impressed with my first Pad Thai attempt.  This won't be the last Pad Thai recipe on my blog. 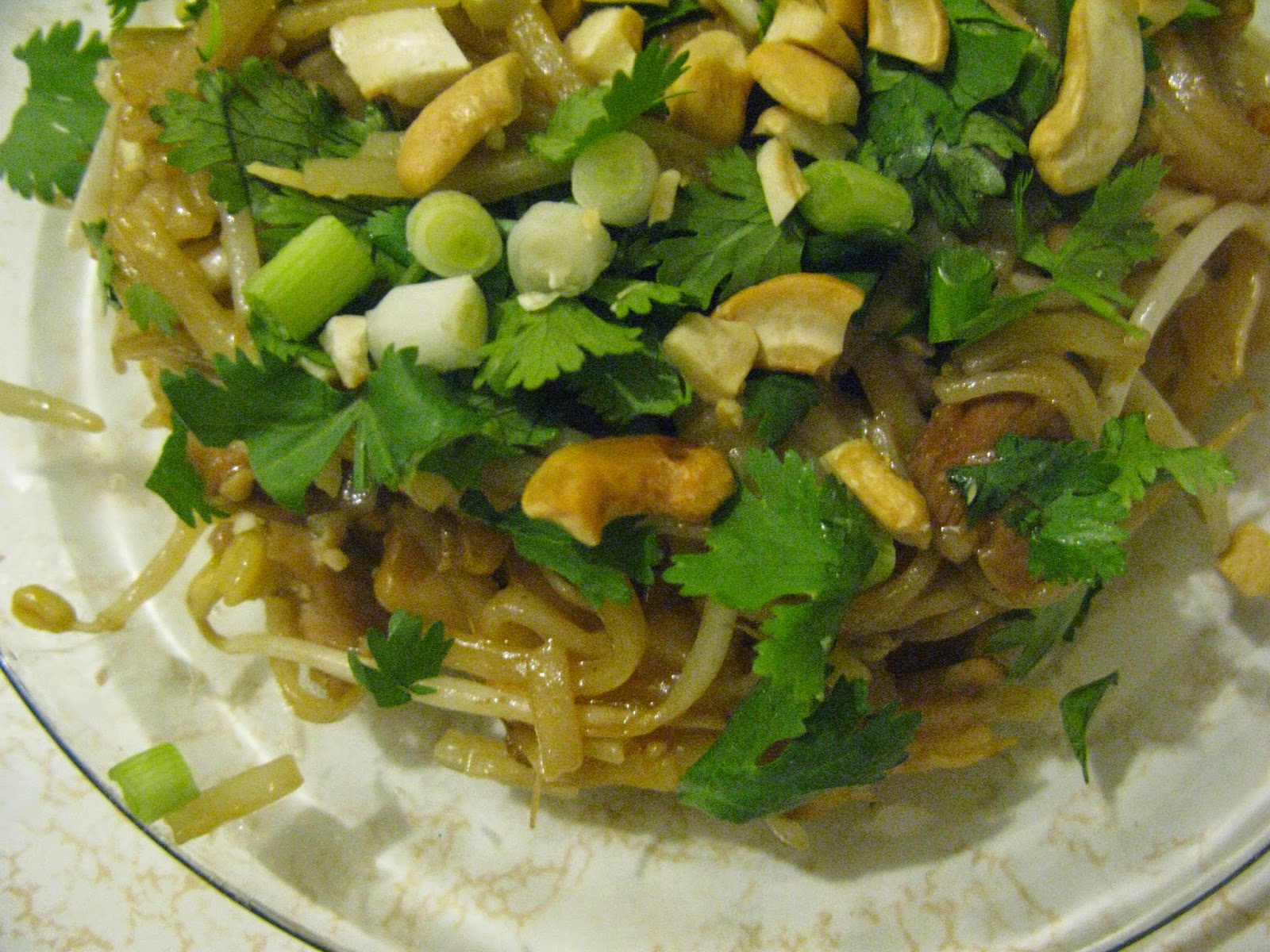 Looks and sounds delicious! Definitely need to give this a try!

Trish, Thanks! I definitely won't be the last time I make pad thai!