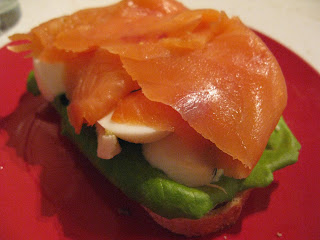 I went to Iceland a few weeks ago.  I ate lamb, black licorice, a rhubarb cake, and a couple of smoked salmon sandwich with thinly sliced eggs.  I ate the first sandwich for lunch and enjoyed it so much that I ate another for dinner. 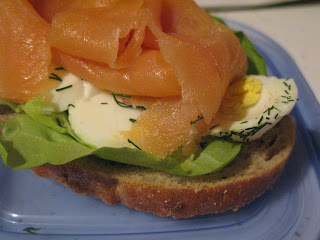 What do you know about Iceland?  A friend who traveled with me said the entire country only has a little over 300,000 people.  The language, Icelandic, is derived from old Norse.  Everyone I encountered spoke perfect English.  It was impressive. 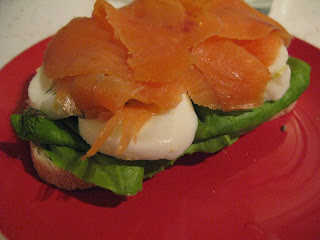 Iceland was populated in the ninth and tenth century by immigrants from the British Isles and Scandinavia.  Icelandic authors publish more books per capita than any other country.  Everyone in Iceland is literate and has been since the 18th century. 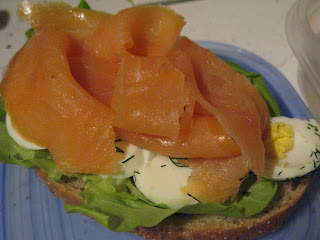 The weather was so changeable.  I imagine the winters are harsher than anything I have experienced.  Ice covers 10% of the land.  The country has active volcanoes, black sand beaches, glaciers, geysers, and vast green scenery. 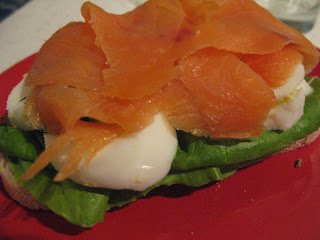 It was a breathtaking country, and I'm glad I have had the opportunity to visit.  I would never want to visit in winter though. 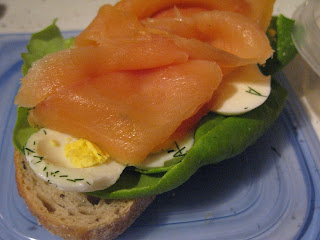 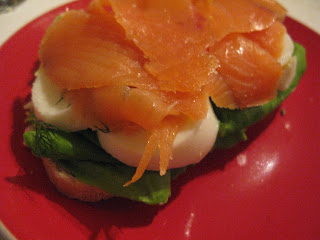 I didn't use a recipe for this sandwich because sandwiches are pretty self explanatory.  I tried to recreate the dip, but it was stronger than the original.  I ate the first sandwich with the dip as a side condiment, but I ended up spreading a thin amount of the dip on the bread instead. 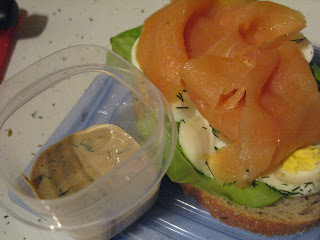 The ingredients for the sauce are the zest and juice of one lemon, 1/4 cup mustard, and 2-3 tablespoons fresh dill.  Each sandwich requires one slice of bread, 2 -3 bib lettuce leaves, 1 hard boiled egg, 1/2 teaspoon fresh dill, and about 2 ounces smoked salmon.  I used rye bread, but any crusty bread would do. 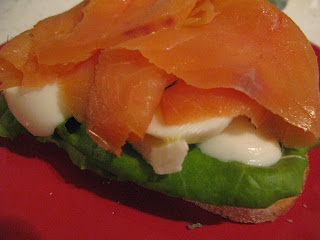 I removed the zest the lemon and then juiced it.  How harsh and invasive! 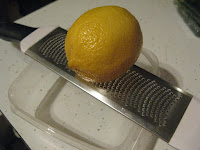 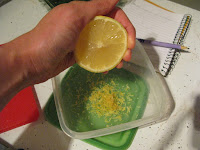 I combined the lemon zest and juice with the mustard and dill. 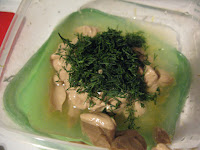 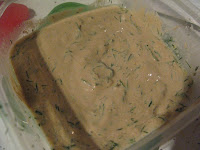 Spread the slice of bread with a layer of the dressing.  Add a few bib lettuce leaves and the thinly sliced egg. 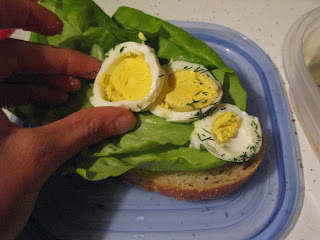 I added a little extra fresh dill and salt. 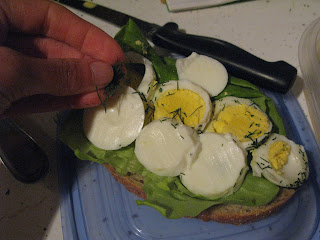 I added several slices of smoked salmon.  I used a little over two ounces for each sandwich.  Smoked salmon is expensive, but sometimes you have to splurge. 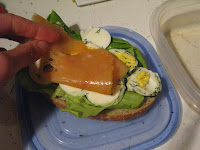 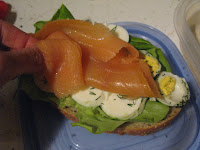 These photos show the dressing as a side condiment.  Don't do that; it's way to strong.  I think adding some extra virgin olive oil would make it a little less overwhelming.  Spreading a thin layer on the bread also did the trick. 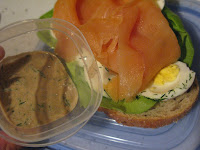 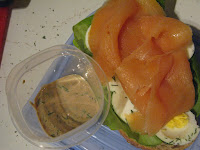 This was a toothsome and flavorful sandwich.  The egg, salmon, and dressing work perfectly together. 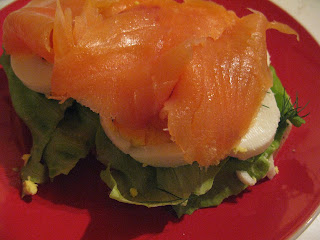 The egg was creamy.  The salmon was light, smokey, and rich. 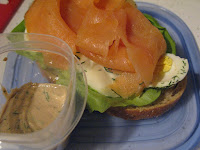 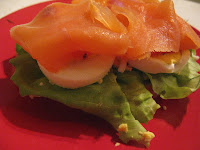 A thin layer of dressing was the appropriate amount. Otherwise it was overpowering.  Dill, mustard, and lemon are great accompaniments to salmon.  The dressing was fresh and bright. 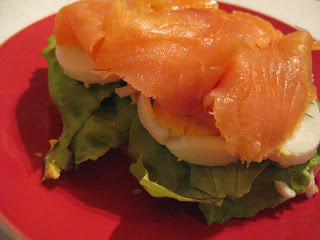 The textures were excellent as well.  The salmon was firm, the eggs smooth, and the lettuce crisp.  It was a delicious sandwich.  I knew when I first ate it I would try and recreate it at home.  This version is an almost perfect copy. 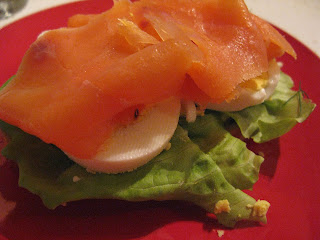 So jealous that you went to Iceland! I'd love to visit someday. Smoked salmon is a weakness of mine. My brother and I used to fight over it when we were little. Now I get to fight my husband and daughter for it. I can't get enough!

I've never been to Iceland before but would love to one day. Smoked salmon is my weakness and it sounds amazing in this sandwich!

Thanks Ladies! I definitely don't get enough smoked salmon in my life :)