Earlier this week I said I would soon make Thai coconut soup. That is still the plan, but today I made 番茄炒蛋 (fan qie chao dan).  When I taught English in Shenzhen, I usually ate breakfast, lunch, and dinner at the school’s cafeteria.  Much like American students, the pupils didn’t exactly love the school meals.   I thought the food was fine until I ate there fifteen times a week for nine months.  The food was really healthy; China doesn’t have a high proportion of overweight children for a reason.  I first ate frog, lotus root, and like a million leafy green vegetables that I had never heard of before at the school’s cafeteria.

There were a few dishes I particularly enjoyed, and at the top of that selective list was 番茄炒蛋. It is a pretty simple dish, and I have recreated it in the past.  This time I looked at a recipe for guidance.  This is one of those dishes, like peanut butter and jelly sandwiches, that I have eaten ad nauseam, but for which I always have an appetite.  In China, I was never served this for breakfast, but it seems like an American breakfast dish.

I adjusted the recipe for one tomato loving individual who doesn’t have any sesame oil.  The ingredients I used were two eggs, one scallion, one large tomato, extra virgin olive oil, cilantro, salt, and pepper. 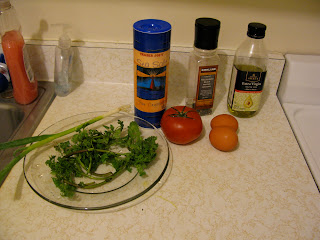 The original recipe said to warm the eggs up to room temperature before beginning.  I didn’t have time for this step, so I skipped it. I heated the tablespoon of olive oil on medium heat and then slightly browned the green onion, which had been cut on the bias. 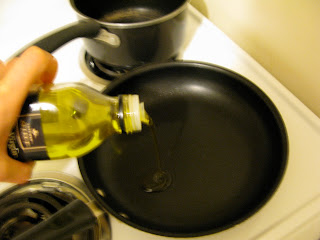 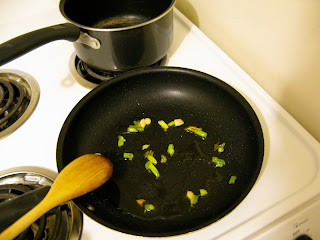 I increased the temperature to high and gentle slide in the two eggs.  You’ll notice in my picture that I didn’t beat the eggs.  The yolks were still intact at this point.  I am making a big deal about this because the original recipe directed me to add the egg unbeaten. 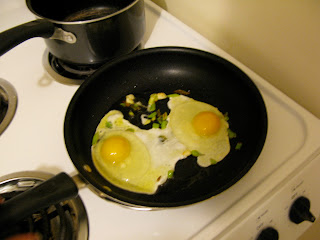 When the eggs just begin to form a white skin at the bottom of the pan, add the diced tomatoes.  This is when the long anticipated yolk breaking begins.  Stir the tomato and eggs around until the eggs are just set.  Salt and pepper to taste. 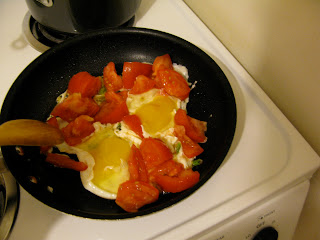 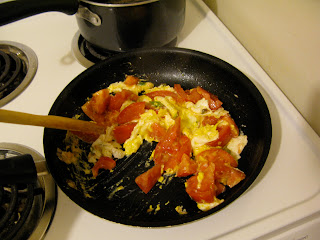 Garnish with a heap of cilantro. Cilantro is amazing.  It has to be one of the most utilized herbs out there.  It’s used in Chinese, Thai, and Latin America cuisine.  I just googled cilantro and learned that coriander is the seed of the cilantro plant.  It is also really old, as in at least 5000 years old.  It has been found in ancient Egyptian tombs and is mentioned in the Old Testament (Exodus 17:31). The moral of the story is that you should eat and love cilantro. 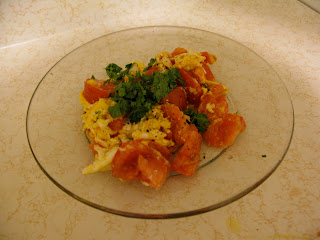