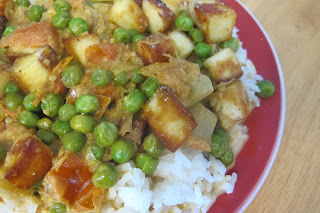 It's March.  It is my birth month.  I already have my cakes planned out. 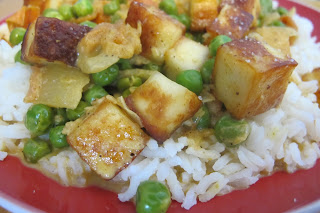 I had narrowed it down to two different types but couldn't decide between the two.  Instead, I am going to make two cakes.  I'm going to have a pre-birthday cake to get into the spirit of things. 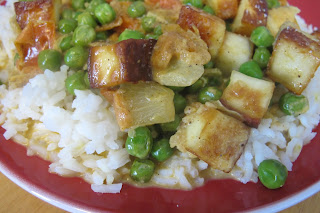 Matter panner is a vegetarian dish from northern India.  It has a tomato base and contains peas and paneer cheese.  It also is spiced with garam masala. 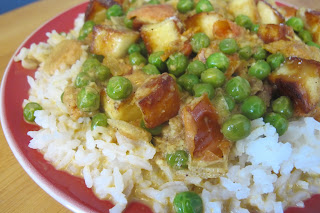 I buy my paneer at Whole Foods, but it isn't cheap.  I wish I lived near an Indian grocery store because I'm sure they sell it for less.  Paneer is eaten in India, Pakistan, Afghanistan, Bangladesh, and Nepal. 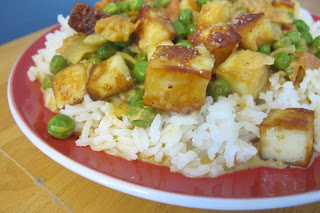 It is made by curdling warm milk with an acid like lemon juice or vinegar.  Unlike most cheese, paneer doesn't melt.  The word paneer is Persian, but the origin of the dish is not clear. 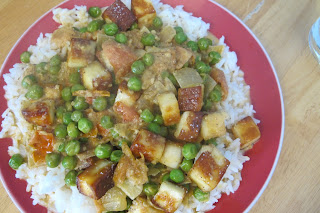 Most international fast food chains, like McDonalds, have a paneer dish on their menu in India.  Taco Bell in India has a paneer and potato burrito.  I find that very entriqing. 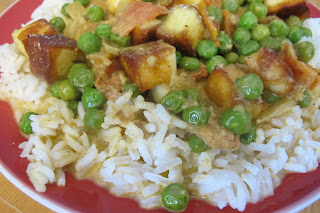 I found this mattar paneer recipe on food.com.  I used more cheese, more tomato, more peas, and more cream.  I also didn't add any mustard seed.  I used cumin instead of cumin seeds. 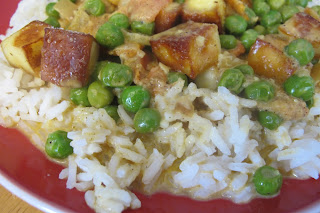 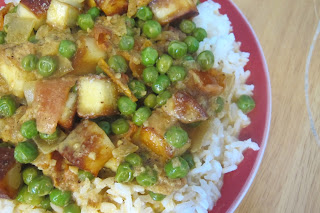 I added cilantro as a garnish most of the time I ate this dish, but forgot it the one time I took pictures. 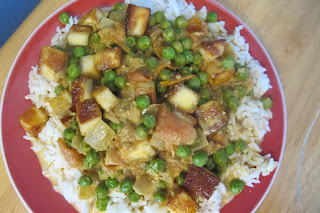 I added a tablespoon of oil in a skillet.  I browned the cubed paneer over medium heat. 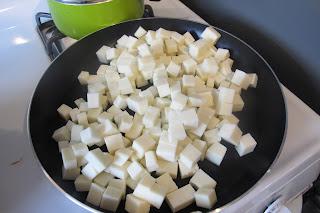 While the paneer was browning, I added another tablespoon of oil in a pot.  I added the half teaspoon of cumin and cooked the spice for a few seconds. 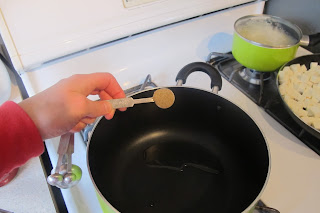 I added the chopped onion into the cumin.  I sautéed the onion for a few minutes. 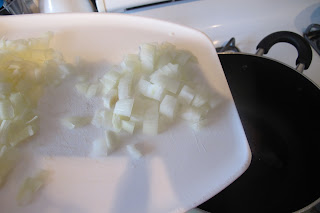 I added the minced ginger and garlic.  I continued to cook this for a few more minutes.  The onions soften.

I added the chopped tomatoes, salt, and sugar.  I cooked this until the tomatoes softened.

I added the garam masala, chili powder, turmeric, coriander, and cumin.  I added the water and let this simmer for about five minutes.  The tomatoes continue to soften.

I added the peas.  I cooked the curry until the peas were warm. 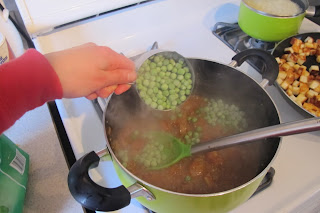 I added the cream and browned paneer.

I let this sautéed for a couple of minutes.  The flavors melted and everything was toasty warm. 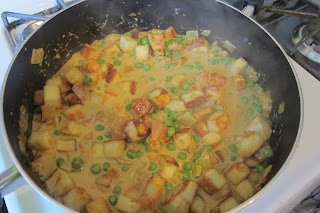 I served this over white rice.  I garnished the top with fresh cilantro. 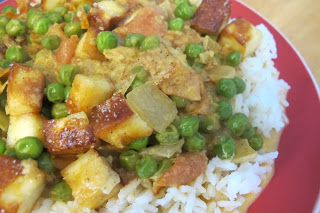 This was a delicious meal.  It was flavorful and full of delicious and warm spices.

The cheese was brown and golden on the outside.  It was creamy, smooth, and warm on the inside. 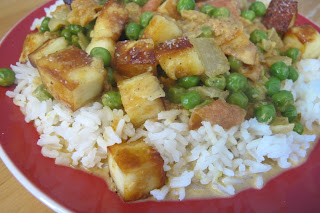 The sauce was creamy and tangy. 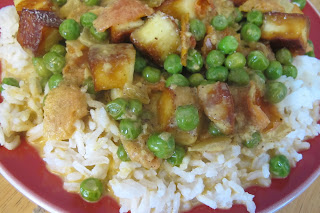 The peas were tender but not mushy.

It was scrumptious and savory. 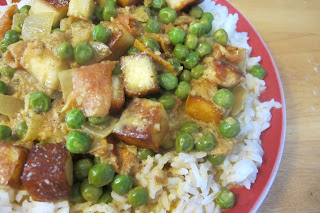 I enjoyed this recipe immensely.   It is one of the tastiest things I have made all month.

For being vegetarian, it wasn't healthy.  It was full of cheese and cream, but it was delicious. 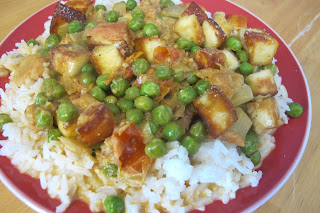 This was fantastic.  I would gladly make it again. 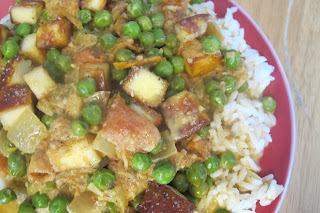 What a gorgeously hearty veggie dinner!! It's supposed to snow here (I am not a fan of that) so I need something comforting to take away the cold! This recipe might be just the ticket.

Thanks Jessie! I hope you got through your cold spell!