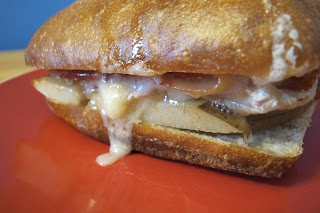 Last Fall I went to Newport, Rhode Island  for a long weekend.  We visited many large mansions and walked along the ocean.  We also ate at a little cafe that served delicious sandwiches.  I ate a prosciutto, brie, and pear sandwich.  I though it was such a unique and creative idea. 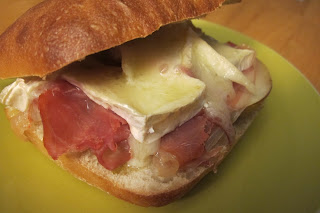 I decided to create it at my apartment a few weeks ago.  I search online to see if there were other sandwiches like it, and it is not that unique.  There are apparently many people who eat prosciutto, brie, and pear sandwiches.  It's hard to be unique these days. 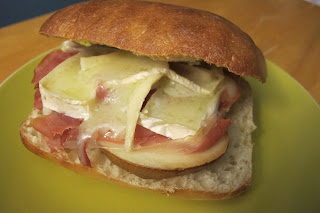 Prosciutto is a dry cured ham from Italy.  It is usually made from a pig's back leg or thigh.  The meat is first cleaned and then salted.  It sits in the salt for around two months.  During this time the meat is pressed.  After being pressed, it is cleaned to remove the salt.  It is hung it a dry and dark space to dry for up to eighteen months. 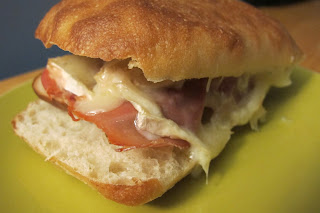 Brie is a soft cheese made from cow's milk.  It is called Brie because it originated in the Brie region of France.  The white rind the surrounds brie is actually mold. 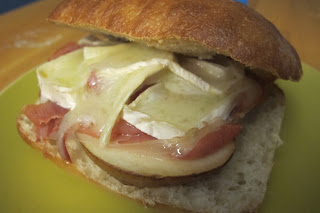 Enzymes called rennet are added to the milk and then the milk is heated to 99 degrees.  This creates curd.  The curd is placed in molds.  The liquid is drained from the mold for about eighteen hours.  It is then taken out of the mold, salted, and aged for at least four weeks. 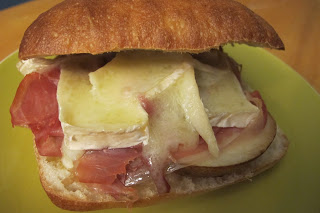 I didn't really use a recipe for this sandwich.  Sandwiches are pretty simple affairs. 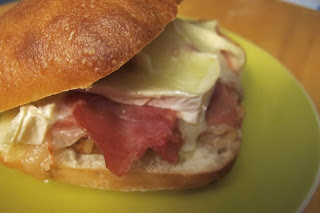 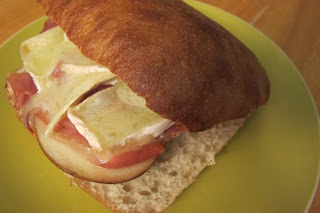 I sliced open a piece of ciabatta. 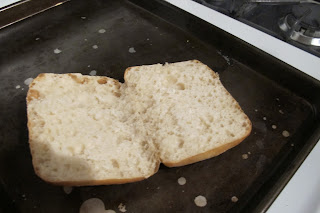 I added thinly sliced pears.  I used about a third of a pair for each sandwich. 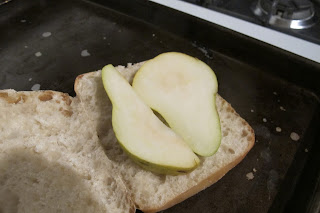 I layered on prosciutto.  I used about two to three slices of prosciutto for each sandwich.

I covered the prosciutto with slices of brie. 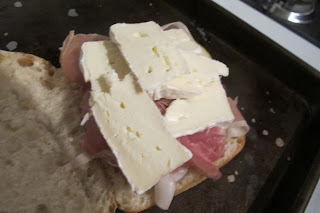 I placed the top of the bread on the sandwich.  I baked it for about seven minutes at 350 degrees. 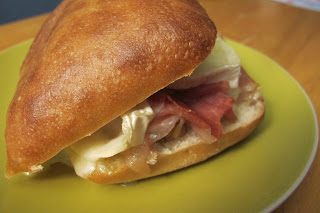 This was a scrumptious and mouthwatering sandwich.

The prosciutto was savory and salty.  It had a nice, smoky pork flavor. 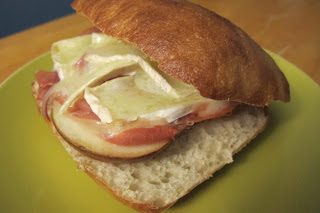 The cheese was mild, creamy, and gooey.

The bread became a little crisp and golden in the oven, but the center was still soft. 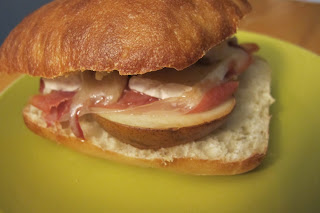 The pear soften and sweetened a little in the oven, but it was still a little crisp.

The prosciutto, cheese, and pear made a delicious combination.  It was a standout sandwich.  Yum! 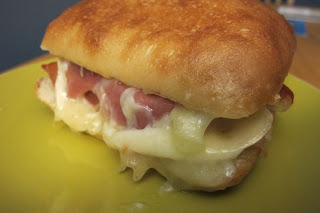