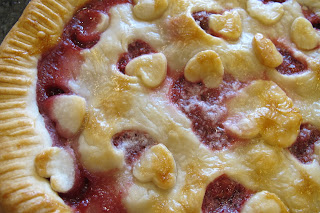 It is a strange time of year to post a cherry pie recipe.  Cherries are harvested in the summer.  My parents bought a few pounds of tart cherries during the summer and froze them.  We made a cherry pie when I visited them last month. 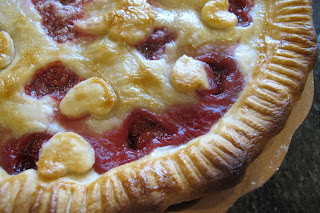 We actually made this pie for Thanksgiving.  There were about nine pies at Thanksgiving.  I tried my best, but I only tried about half of them.  I ate this pie, and it was delicious. 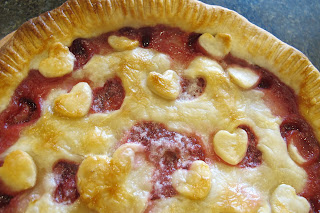 Cherries are grown in temperate climates.  In order to germinate, cherry seeds need to be exposed to the cold.  They are planted in the fall, and begin to sprout in the spring.   It takes a few years for them to grow and produce cherries. 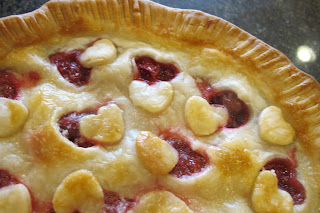 Cherries were first grown in Europe and western Asia.  The cherry was brought to Rome in 72 AD from Anatolia, which is modern Turkey.  The word cherry is deserved from the Latin word cerasum. 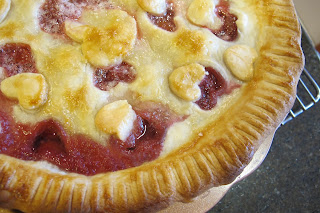 The recipe came from my mother's cookbook.  It may have been a Betty Crocker cook book?  We used tapioca flour instead of regular flour.  The ingredients are 4 cups tart cherries, 1 1/4 cups sugar, 4 tablespoons tapioca flour, 1/4 teaspoon almond extract, 2 tablespoons butter, 1 egg white and 2 pastry crusts. 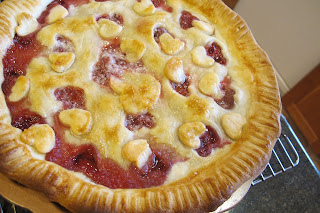 I placed one pie crust into the bottom of a pie pan.  I poured in the cherry filling and then placed chunks of butter on the cherry mixture.

I placed the second pie crust on top of the cherry filling.  I cut hearts out of the top pie crust, but that is not required.  I pressed the edges together with a fork.  I also moisten the edge on the bottom layer with a beaten egg white to ensure the two layers sealed.  I brushed egg white on the top crust. 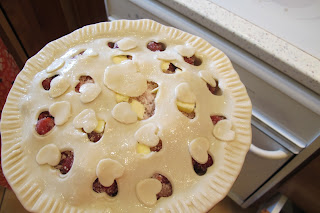 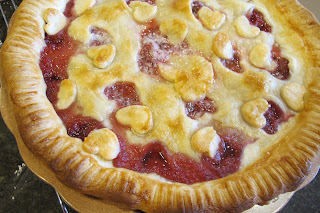 We let it cool completely before eating it. 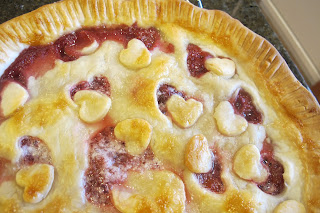 It was a beautiful and scrumptious pie.  The filling was a pretty red.  The cherries had softened in the oven and created a luscious but not juice filling. 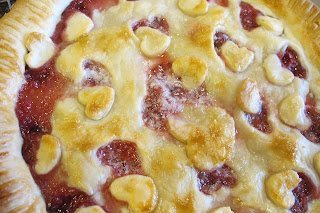 The cherries were bright, sweet, and tart.  I could taste a subtle almond flavor as well.  The cherry and almond taste made a delightful combination.

The crust was golden, crisp, and buttery. 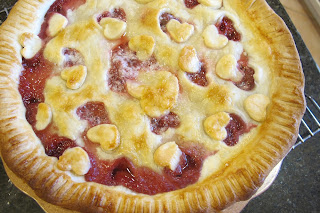 This pie was a standout.  It was homey and delicious. 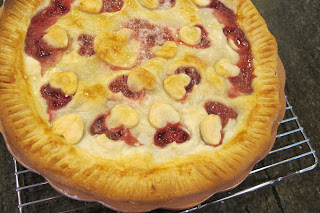 I love love LOVE tart cherries. I live in WI and we have tart cherries in the summer here and I always freeze some for the winter when I'm wanting a good recipe, like this pie - sounds amazing

I love cherry pies! Need to save this recipe for summer when cherries are back in season around here :)