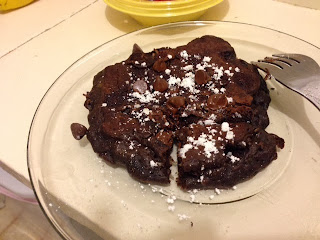 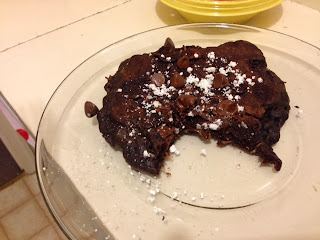 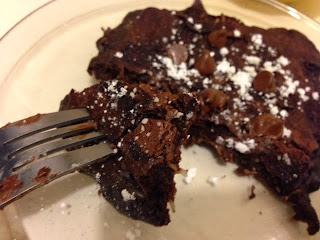 In large bowl I stirred together the coconut flakes, cocoa powder, sugar, baking soda, flour, and salt.  This took a little effort because my cocoa powder was a little clumpy.  I probably could have shifted the cocoa powder beforehand. 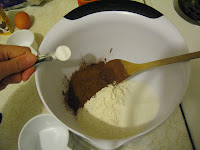 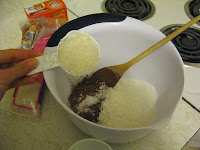 I combined to coconut milk, melted butter, egg, and coconut extract. I beat this together with a fork. 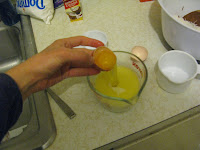 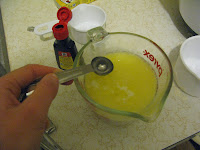 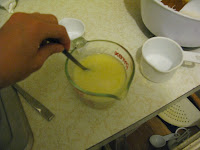 I poured the liquid ingredients into the dry mixture and stirred until the batter was just combined.  I don't have a picture as evidence, but I added the chocolate chips as well. 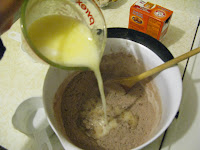 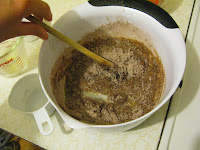 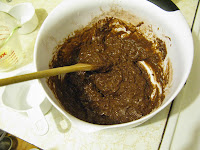 The batter was pretty thick. It made delightful little pancakes, but I could have added an additional tablespoon or two of coconut milk.  I poured a third of a cup of the batter onto a buttered frying pan and cooked it until set. I then flipped and cooked the other side for an additional minute or two. 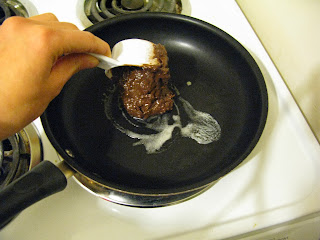 I ate these pancakes with powdered sugar and additional chocolate chips sprinkled on top. Lovely! Who doesn’t love dessert for breakfast? These are chocolaty but not overwhelmingly sweet, which is ideal for a breakfast food. The coconut flavor is present but not overwhelming. 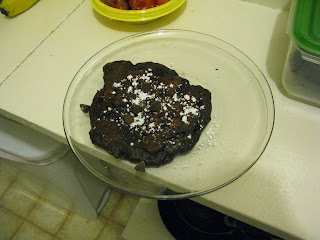 I've never made chocolate pancakes, but I've seen recipes on Pinterest, and this one sounds so appetizing, especially with coconut! YUM!

Alchemy In The Kitchen said...

My hubby would go nuts for these! He loves German chocolate- and pancakes ;) I really like how you used so many layers of coconut flavor. Great recipe!

Thanks! The coconut is a great addition!