Two years ago I lived two blocks away from my favorite neighborhood restaurant. I never learned the name of the restaurant because it was written in Chinese, but their sign had the bust of a woman with an ornate headdress. My favorite set meal was number one, their beef and snow pea stir fry on a bed of rice. I would exchange the soup for a side of broccoli. I ate this meal almost once a week. When I had an especially hard week and needed a few extra calories in the form of sugar and carbohydrates, I would get a cream filled pastry at the bakery next door for desert.

When I saw this recipe from the blog fifteen spatulas, I was overcome by a wave of nostalgia. The set meal I ate religiously for nine months did not have broccoli, so I replaced the broccoli with extra snow peas. Eating this meal brought back many fond memories. 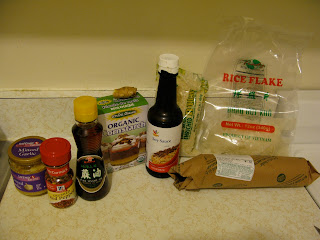 I added the cornstarch, soy sauce, grated ginger, and 2 teaspoons of sesame oil to the finely sliced sirloin steak. The original author suggests placing the steak in the freezer for 15 minutes to make slicing it easier. I starting cooking the rice and prepping the other ingredients to allow the flavors time to merry.

Cornstarch, not surprisingly, comes from corn. It comes from the endosperm of the corn kernel. Like flour, it is used to thicken liquid foods. While flour adds a slightly whitish hue to sauces or soups, cornstarch becomes clear. To thicken a cup of liquid, thoroughly mix a tablespoon of cornstarch with a tablespoon of cold water. Add the slurry to the sauce and cook until thick. 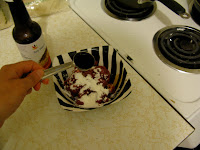 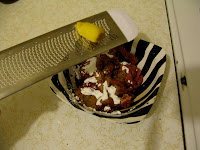 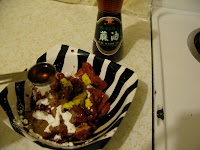 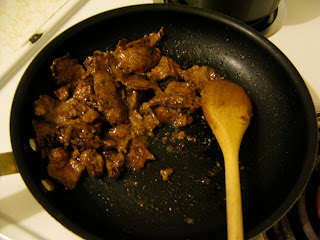 I added the additional sesame oil, garlic, and red pepper flakes to the pan. I reduced the heat a little because I didn’t want to scorch the garlic. I stirred a few times and then adding the snow peas. I cooked the peas for 4 to 5 minutes. 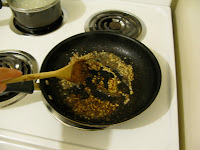 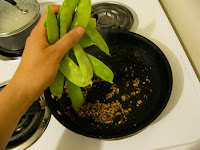 Once the peas were the desired texture, I added the beef and continued to cook for another minute. 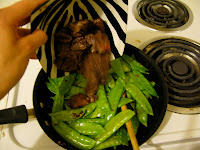 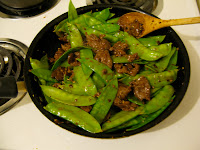 The first day I ate the stir fry with rice noodles, but the following two days I ate it with white rice. It is a mouthwatering dish. It's savory with just a little hint of heat. As an aside, the last time I made rice noodles, I over cooked them until they were mushy. This time I just soaked the noodles in very hot water for about ten minutes, and they were perfectly cooked. 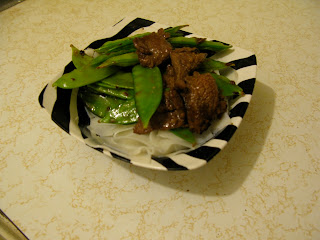