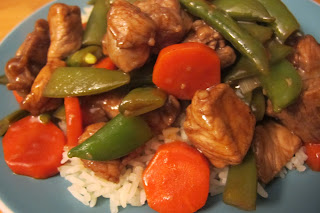 Today was a killer at work.  I felt like I didn't have time to even go to the bathroom.  I had to shovel my lunch down my throat during a twenty minute break. 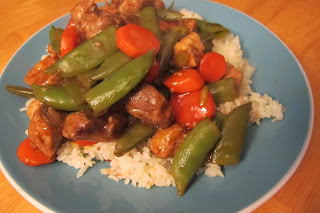 I don't work on President's Day, and I am really looking forward to the break.  I'm not going out off town, so I think it is going to be a low key and relaxing weekend.  My biggest plans so far are to go see a movie. 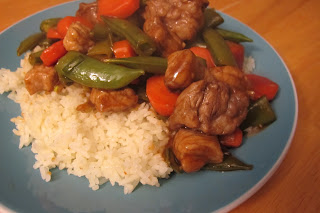 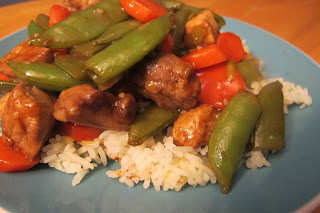 These is also a sweet and sour fruit and vegetable salad from eastern China.  It has vegetables like cucumbers, tomatoes, and bell peppers along with pineapple.  The sweet and sour dressing contains vinegar and sugar.  This salad is served cold.  I have never eaten it, but it sounds tasty.

The sweet and sour Chinese foods in the west have a cantonese origin, but it has been modified.  Western versions often have pineapple.  The sauce will also often contain ketchup and cornstarch to thicken the sauce. 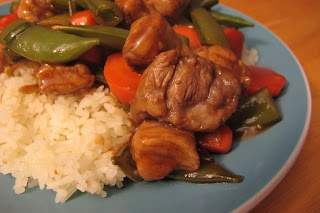 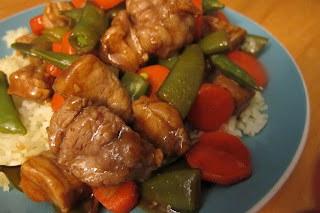 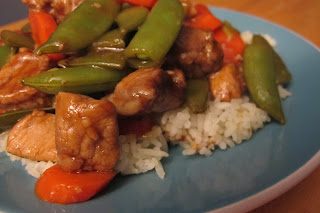 I chopped the pork into half in cubes.  I then mixed the pork with half a tablespoon of the balsamic vinegar and salt. 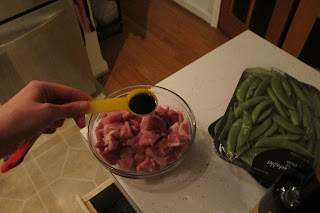 In another bowl, I combined the remaining two tablespoons of vinegar, soy sauce, cornstarch, ketchup, sugar, a third of a cup of water, and a half of a teaspoon of salt.

I added two tablespoons of oil into a hot skillet.  I browned the pork for about two minutes.  I then removed the pork from the pan.

I added the remaining tablespoon of oil and stir fried the garlic with a bit of salt for a few seconds. 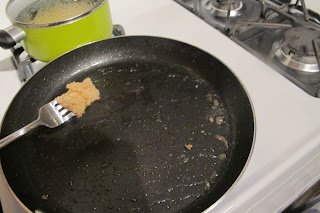 I stir fried thinly sliced carrots for a few minutes 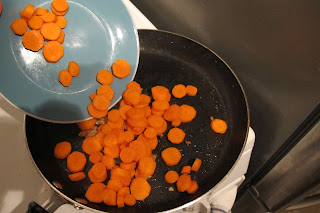 I added the pork back into the pan along with the sugar snap peas.  I sliced the peas in half.

I added the sauce mixture and the sliced scallions.

I continued to stir fry the pork for a about four of five minutes.  The sauce becomes thick and the pork cooks fully.  I served this on top of rice. 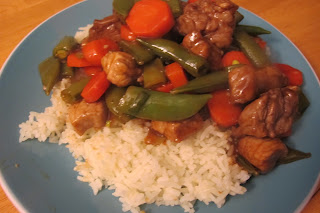 It may not be an authentic Chinese dish, but it is delicious. 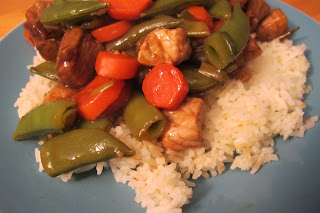 The ketchup makes it tart.  It has a sour vinegar flavor and sweetness from the sugar.

The vegetables were tender but still had crispness. 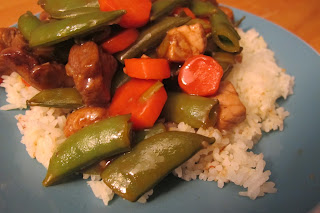 The pork was also well cooked.  It was tender and soft. 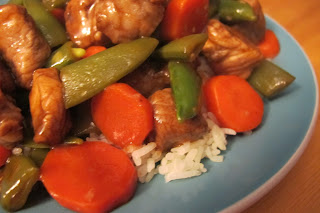 It was a pleasant and enjoyable dish.

It is much healthier than most sweet and sour pork recipes because it isn't fried.  It was flavorful and tasty despite being much better for you. 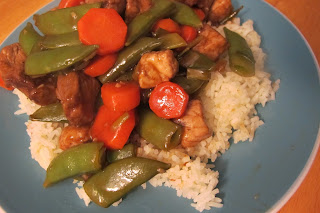 This was a great Chinese-American dish.  I would make it again. 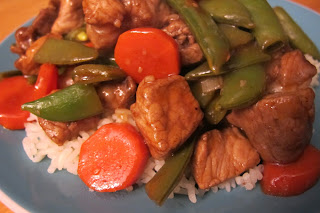