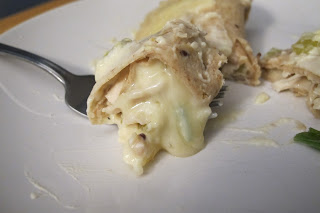 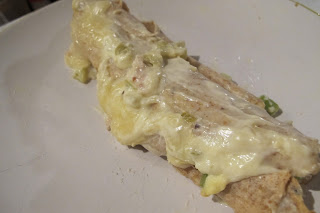 Henna give me something to look at.  The delate and intricate patterns are beautiful.  The second henna tattoo was even more elaborate and elegant than the first one. 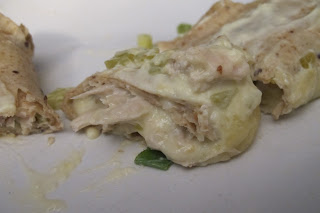 It's funny how many people mentioned the henna tattoo.  All of my coworkers asked me when and where I received it.  People at restaurants or on the metro asked me about it. 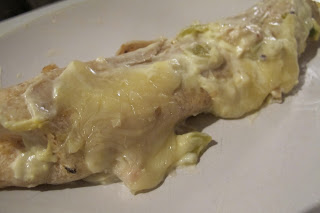 I didn't realize before that people from the Middle East do henna.  I thought it was only an Indian tradition, but it is done throughout North Africa and the Middle East. 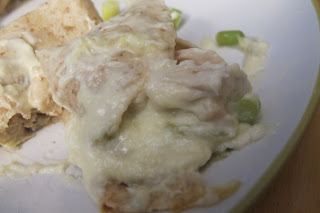 Enchilada is the past participle of the Spanish verb enchilar, which means to to add chile peppers.  It's fantastic that there is such a verb.  Enchiladas originated in Mexico.  People dating back to the Mayan times wrapped their food with corn tortillas. 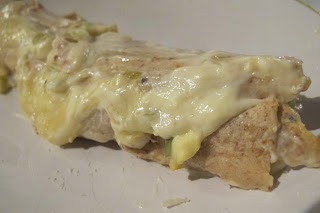 The first time the word enchilada was used to describe this food was in 1831 in a Mexican cookbook. Each region in Mexico has different varieties of enchiladas.  In addition to meats, people fill enchiladas with cheese, potatoes, and vegetables. 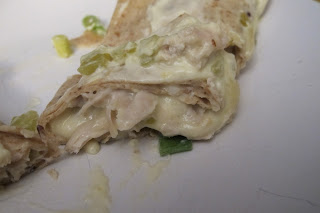 This enchilada recipe is definitely not authentic to any region of Mexico.  I found the recipe on the Pillsbury website.  I'm confident that no self-respecting Mexican would add a can of cream of chicken soup to their enchiladas. 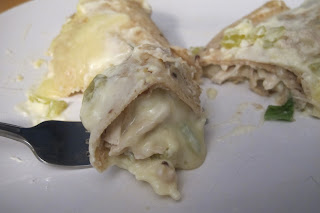 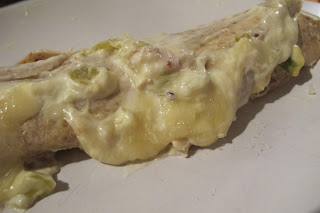 In a bowl, I mixed together the sour cream, yogurt, soup, and chiles.   I  drained the can of chiles before adding into the mix.  I added salt to taste.

I sprinkled on a tablespoon or so of the green onions and around an eighth of a cup of cheese on top of the chicken and sauce.

I rolled the enchilada up tightly and placed it in a greased 9 by 13 inch baking dish, seam side down. 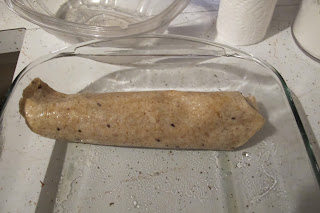 I continued rolling and filling the enchiladas until all the ingredients were gone and the pan was full.

I had a few chopped green onions left over so I placed them on top of the enchiladas. 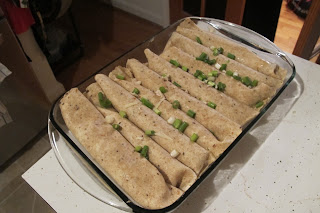 I spooned the remaining sour cream mixture over the enchiladas.

I covered the enchiladas with foil and baked them for 25 minutes at 350 degrees.  I removed the pan from the oven and sprinkled on the remaining cheese.

I baked the enchiladas uncovered for another 5 minutes. 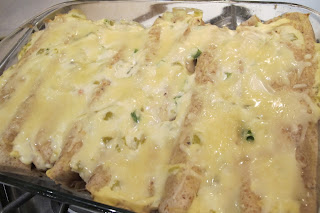 The soft and runny cheese was delicious.  How could it not be? 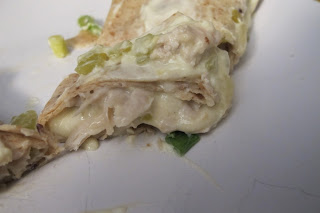 Unfortunately, I wasn't blown away by these enchiladas.  They weren't terrible, but they weren't special either.

The flavor was bland.  Despite the green chiles, they had almost no heat. 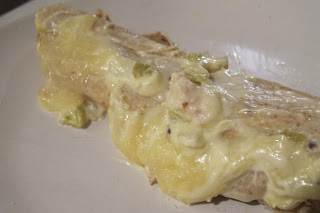 The next time I make enchiladas, I'll be a little more discerning when choosing the recipe.  Perhaps I should have known Pillsbury isn't a great source of Mexican recipes. 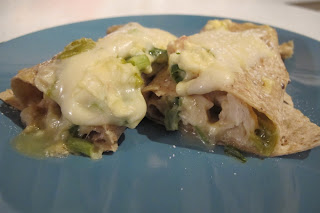 I ate the whole pan over a week, but even on the first day, I was underwhelmed.  Oh well! Sometimes mediocre food happens.

Enchiladas are one of my favourite Mexican meals! These look lovely, I love sour cream on or in anything!

Thanks Jessica! Sour cream is delicious!