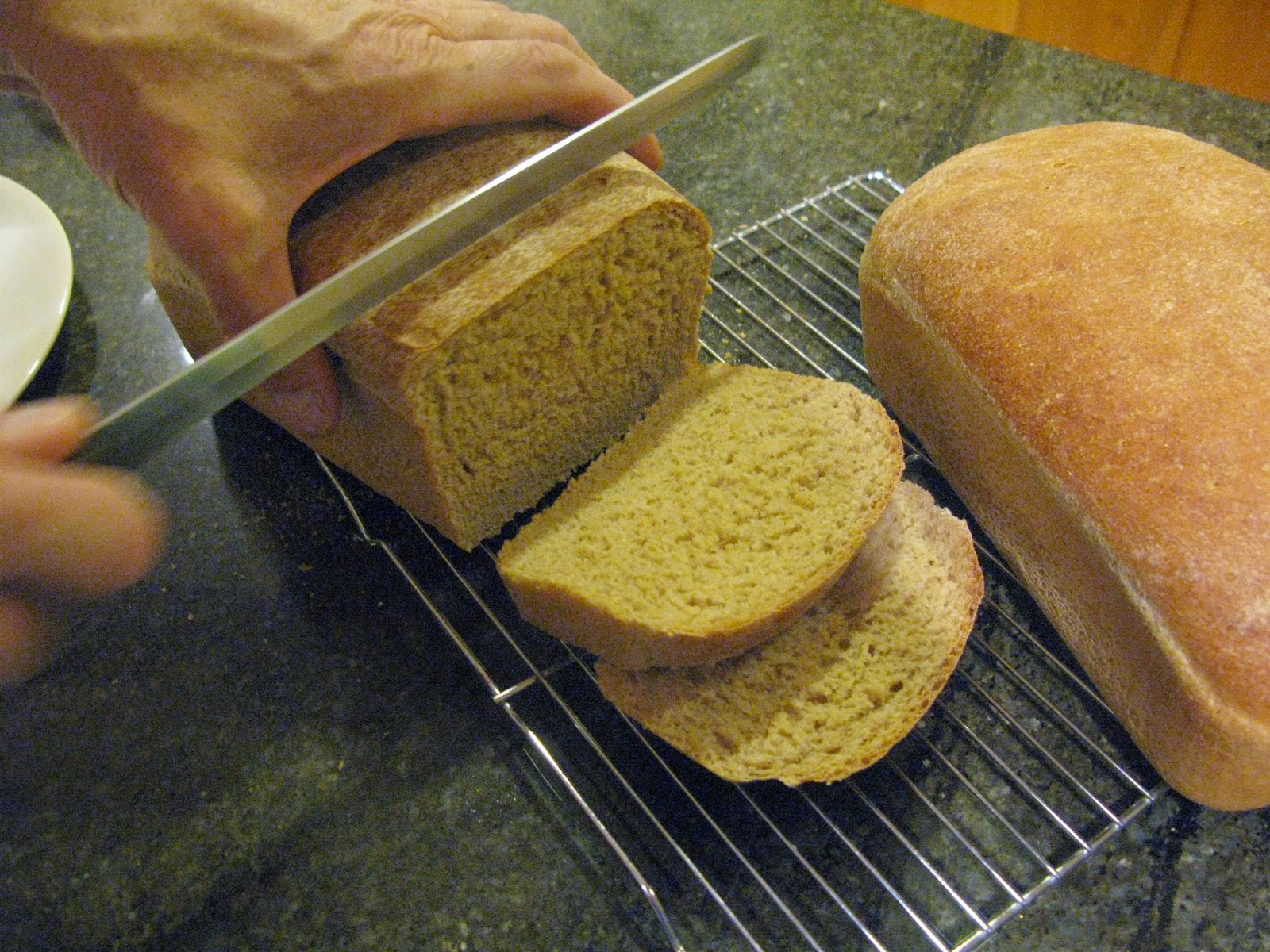 In the last year my father has developed into a bread baker.  I think he was inspired by my brother, who bakes all the bread his family of six consumes.  Many of my family members are big into the sustainable, locally grown food craze. 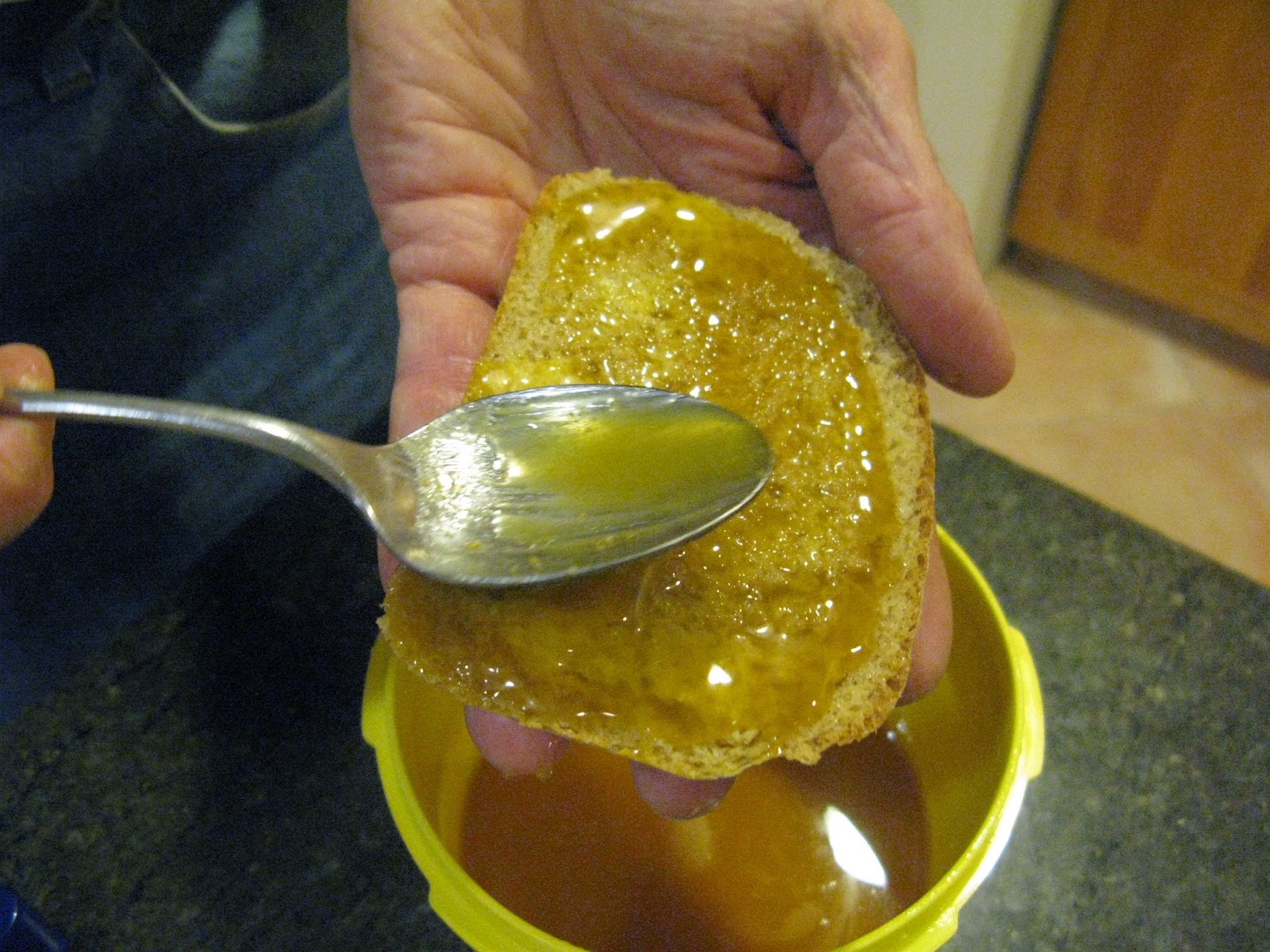 My parents have had a garden for years.  They grow corn, lettuce, beats, herbs, various squash breeds, onions, and tomatoes, among other things.  My dad recently purchased two bee hives.  He has been stung on a couple of occasions too. 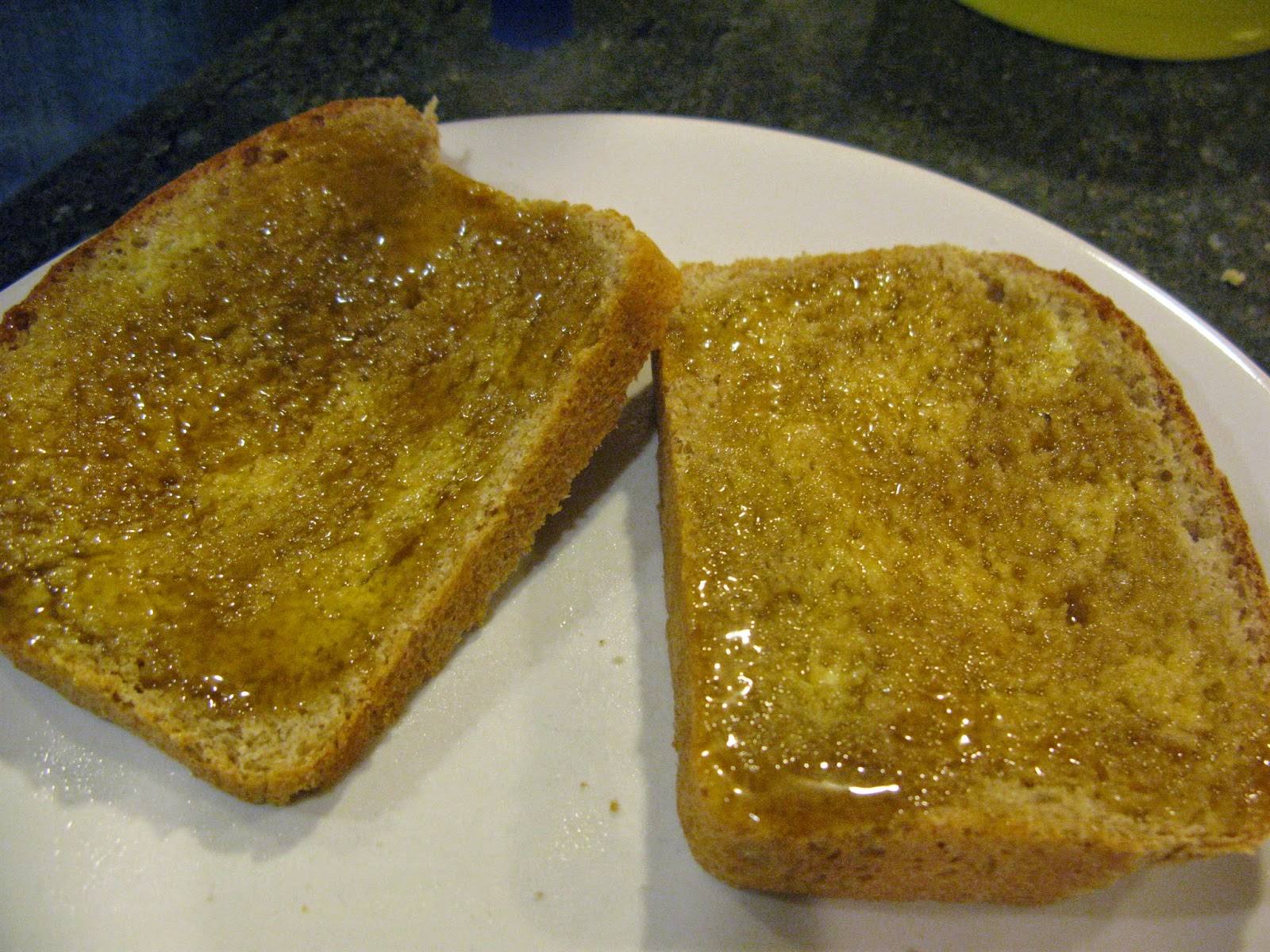 Two of my brothers have chickens, which they have for eggs.  When I was at home last week, I ate bread my father baked, honey from their hives, and vegetables from their garden. 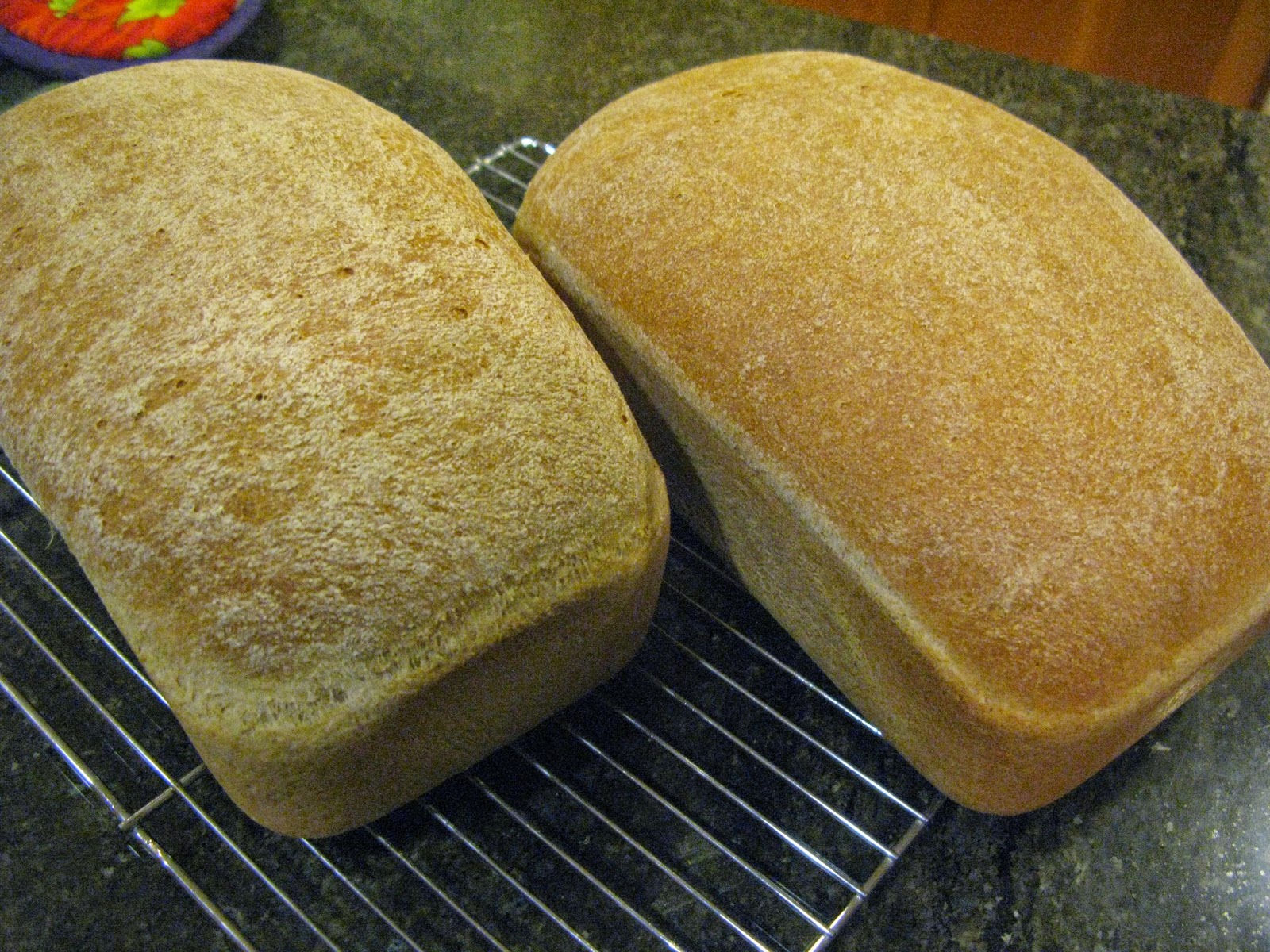 This recipe came from my oldest brother, but I made the bread with my father.  The ingredients are 3 cups warm water, 1/4 cup coconut oil, 1/4 cup honey, 1 tablespoon yeast, 1 1/2 teaspoons salt, 5 to 6 cups whole wheat flour, and wheat gluten.  You can use any kind of oil, and the wheat gluten isn't necessary.  My mother made this alteration to my brother's recipe because it makes softer bread. 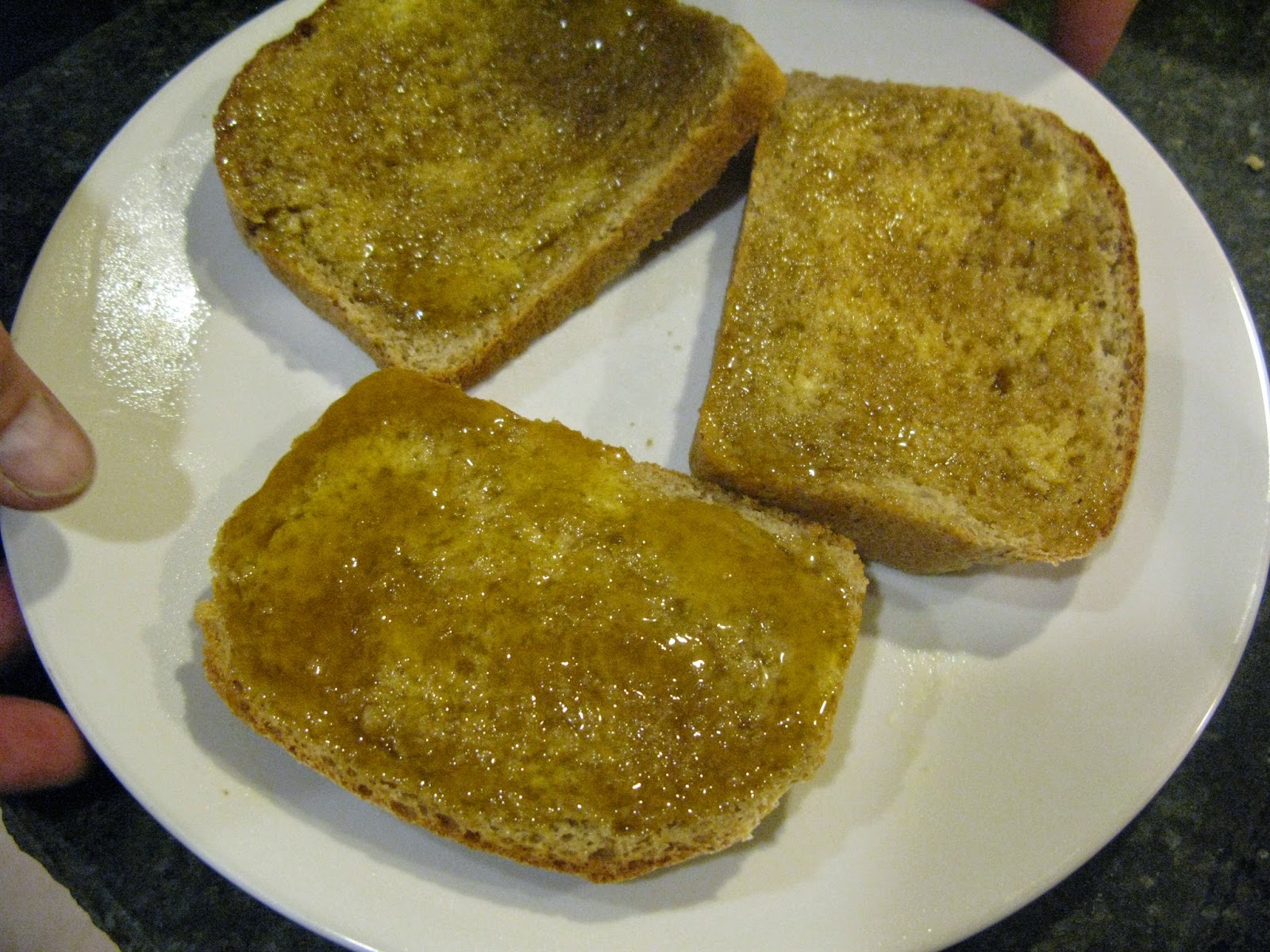 We began by adding the water, oil, honey, yeast, and salt into a bowl with an electric dough mixer.  This is a Bosch, but Kitchenaids come with a bread hook as well. 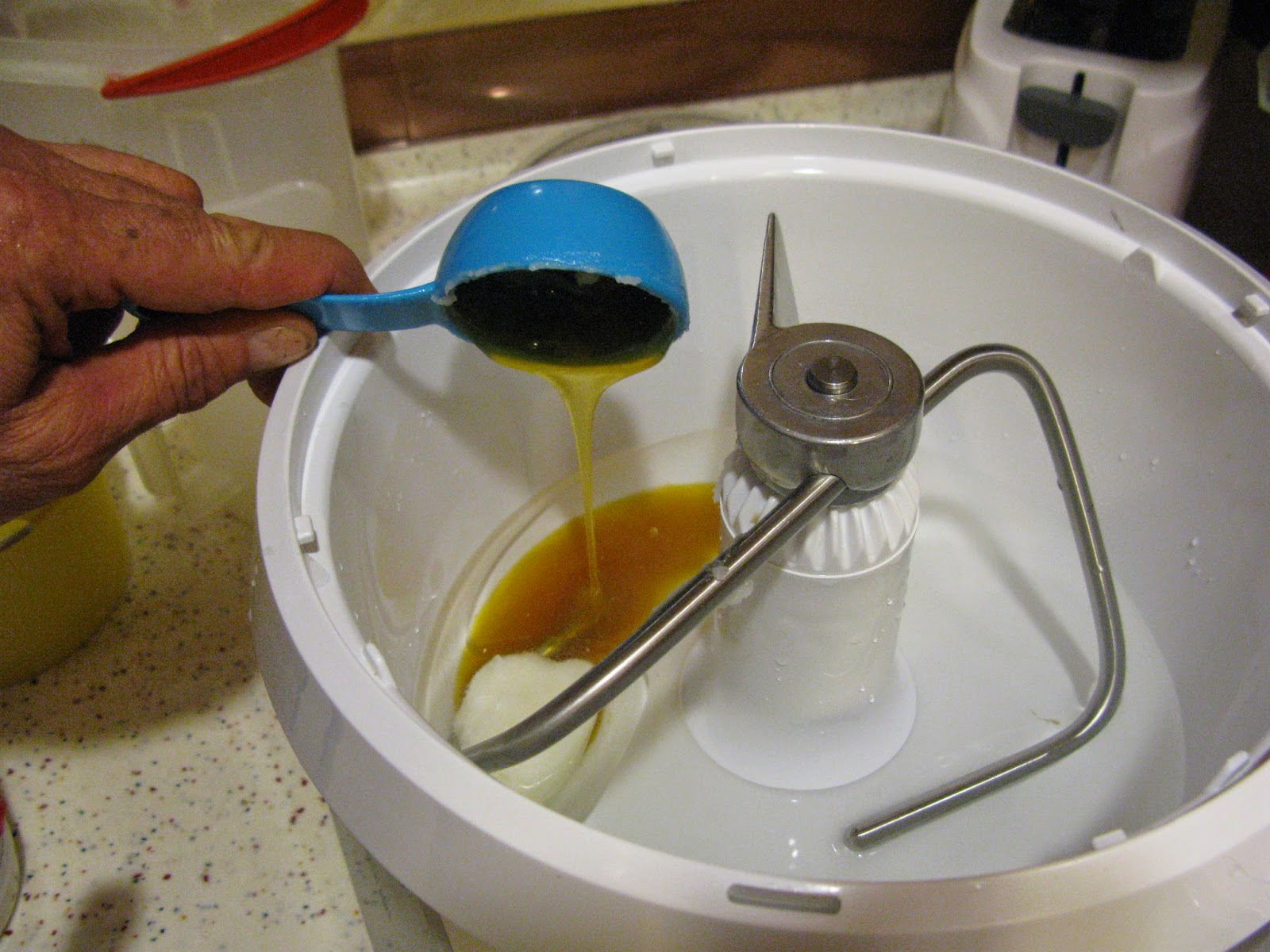 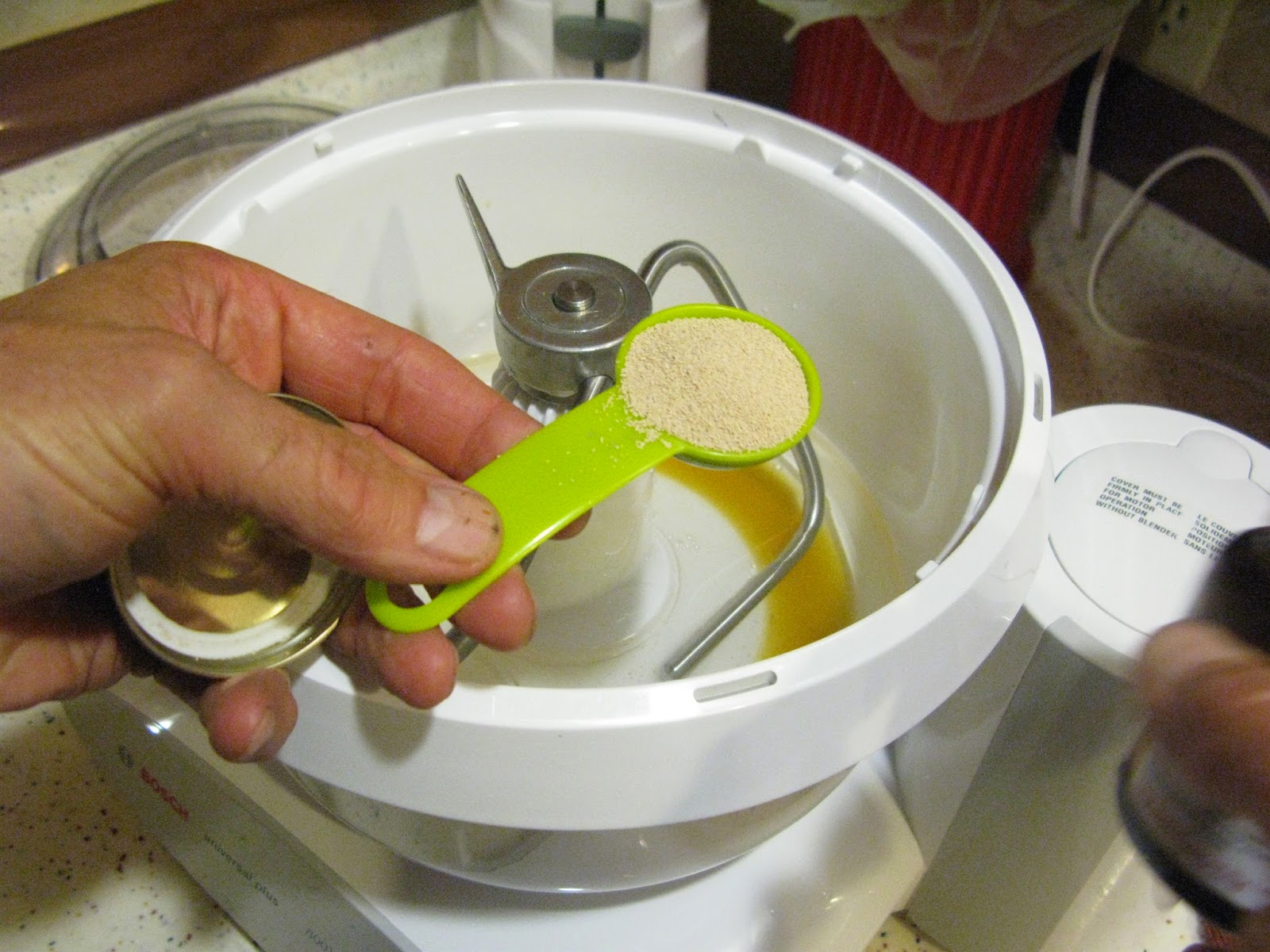 While the mixer was on, we added the wheat gluten and flour.  We added the flour a little at a time. 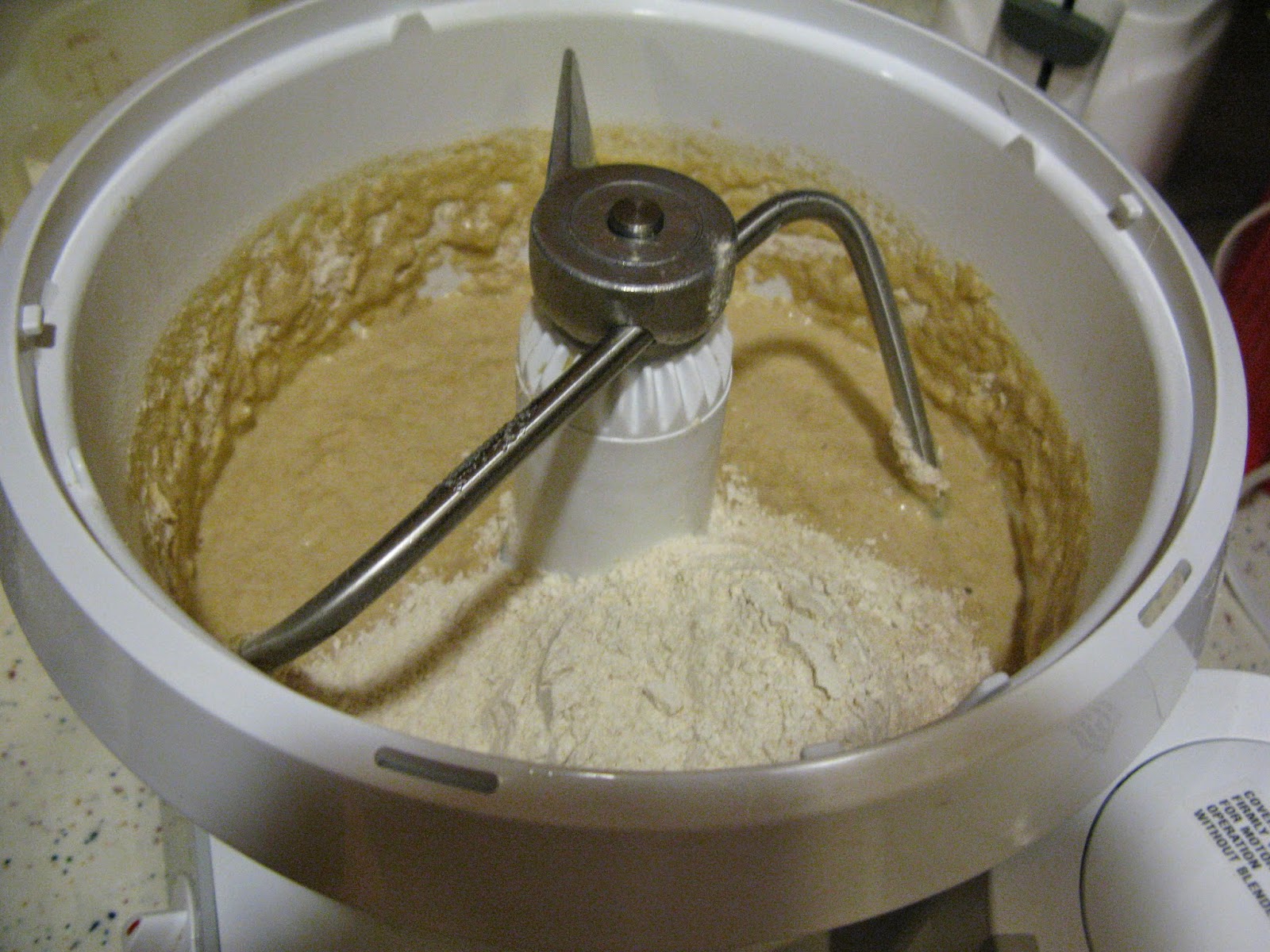 The dough gets thicker and thicker. 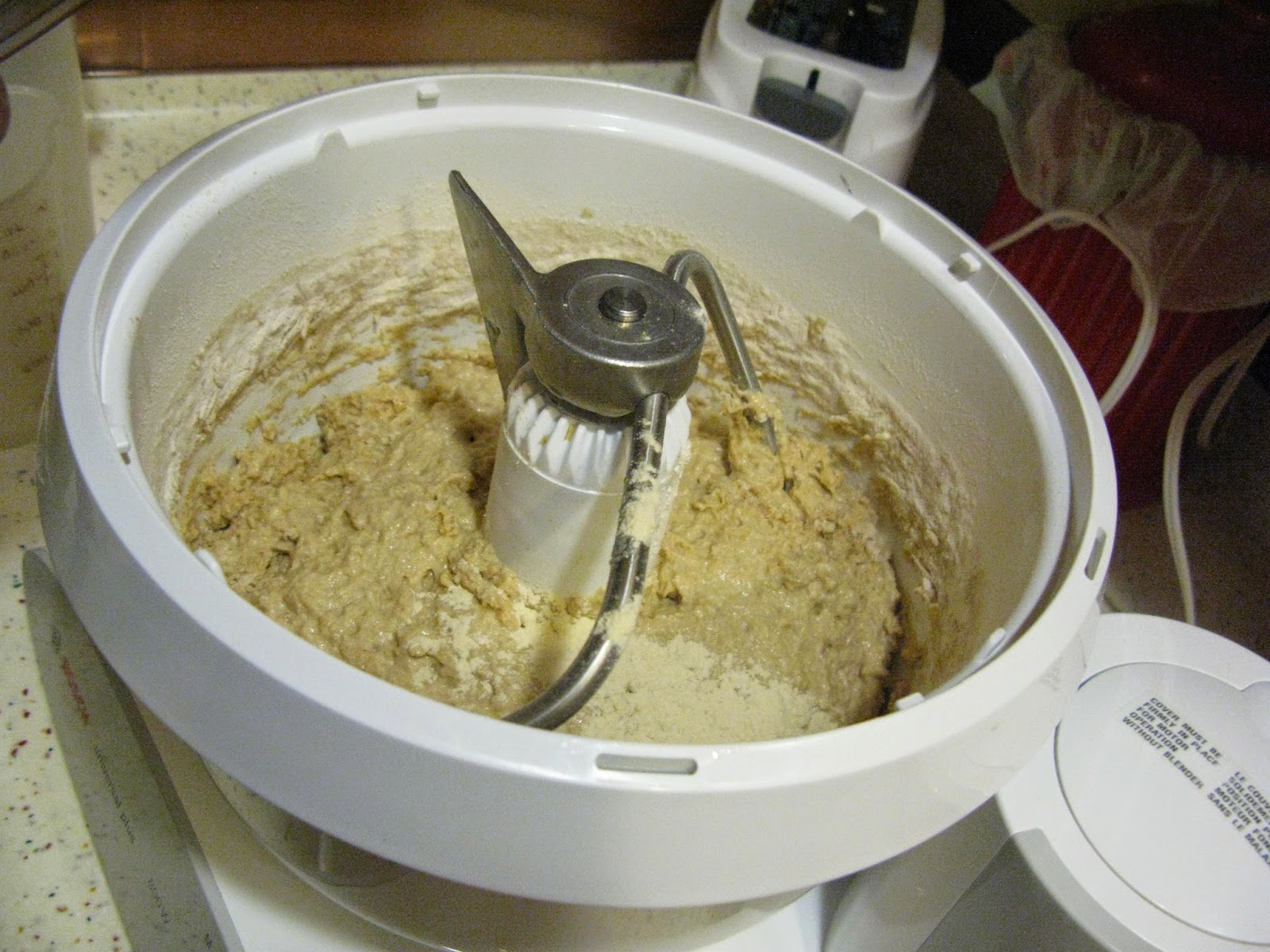 We stopped adding flour once the dough pulled away from the sides.  We kneaded the dough in the mixer for around eight to ten minutes.  We let it rise in the bowl until it had doubled in size.  Depending on the temperature of your kitchen this can take around 20 minutes to an hour. 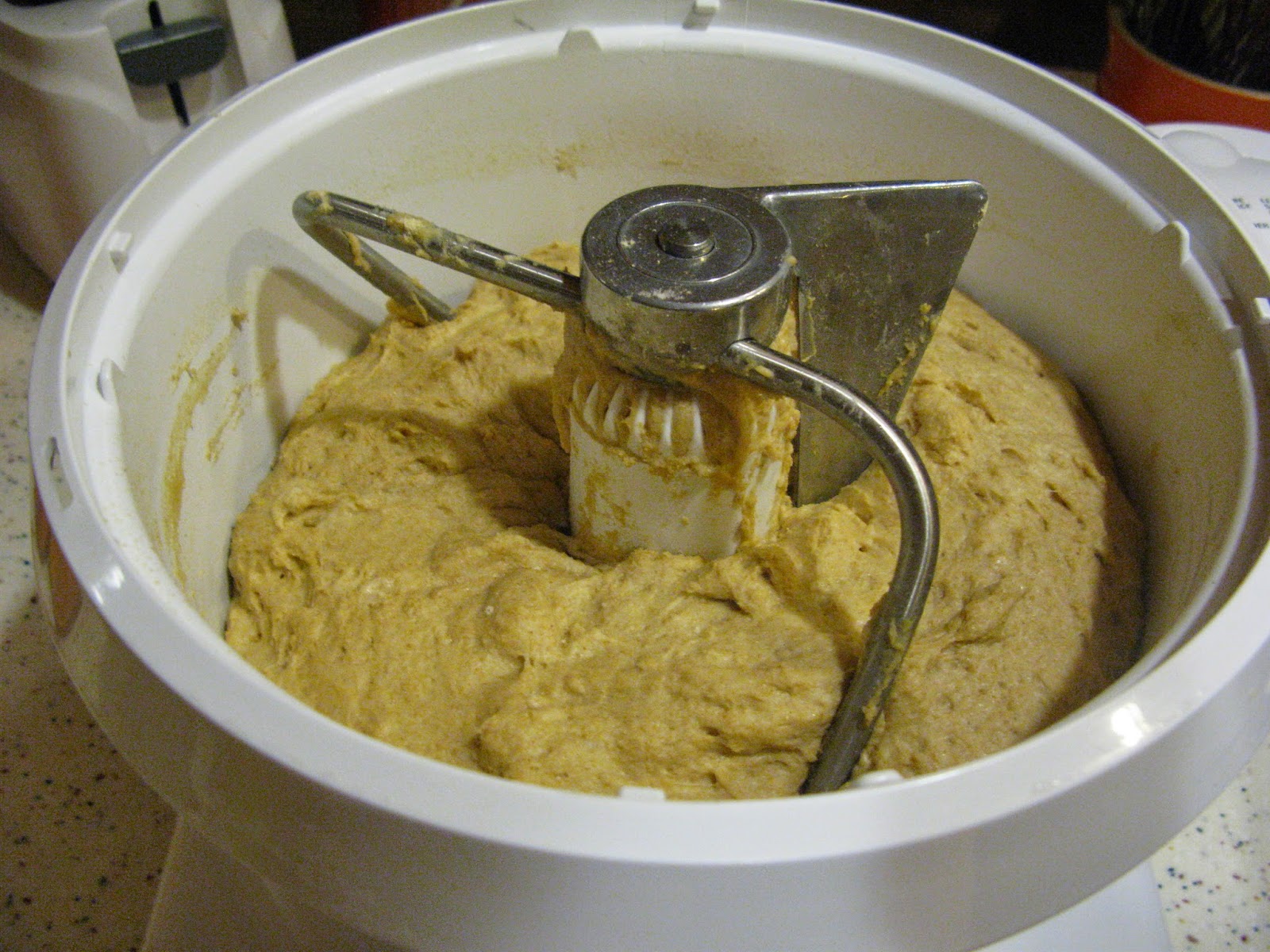 Once it had doubled in size, we cut the dough into two pieces because the recipe makes two loafs. 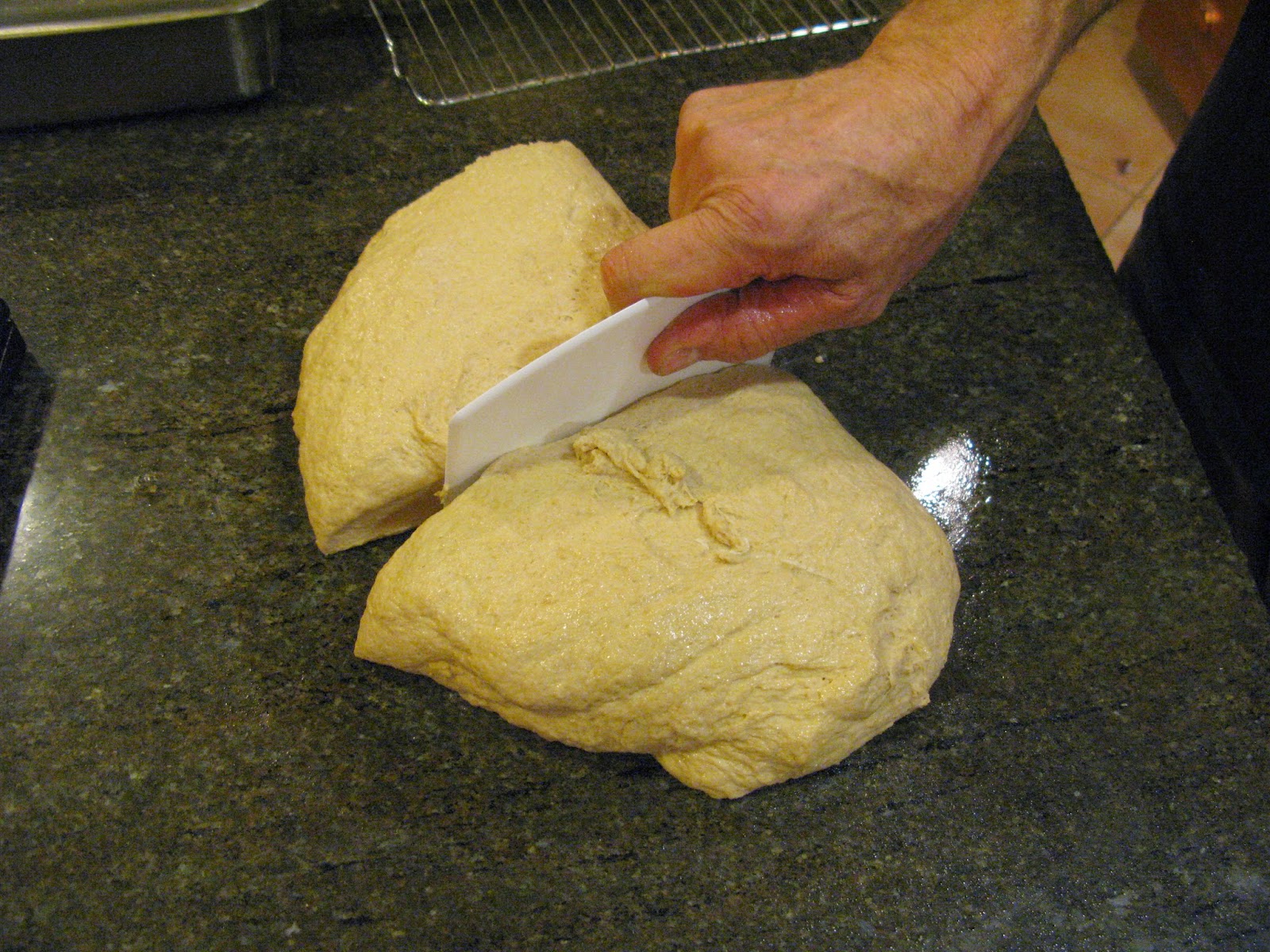 My dad kneaded the loafs a bit with his hands and formed the dough into loaf shapes. 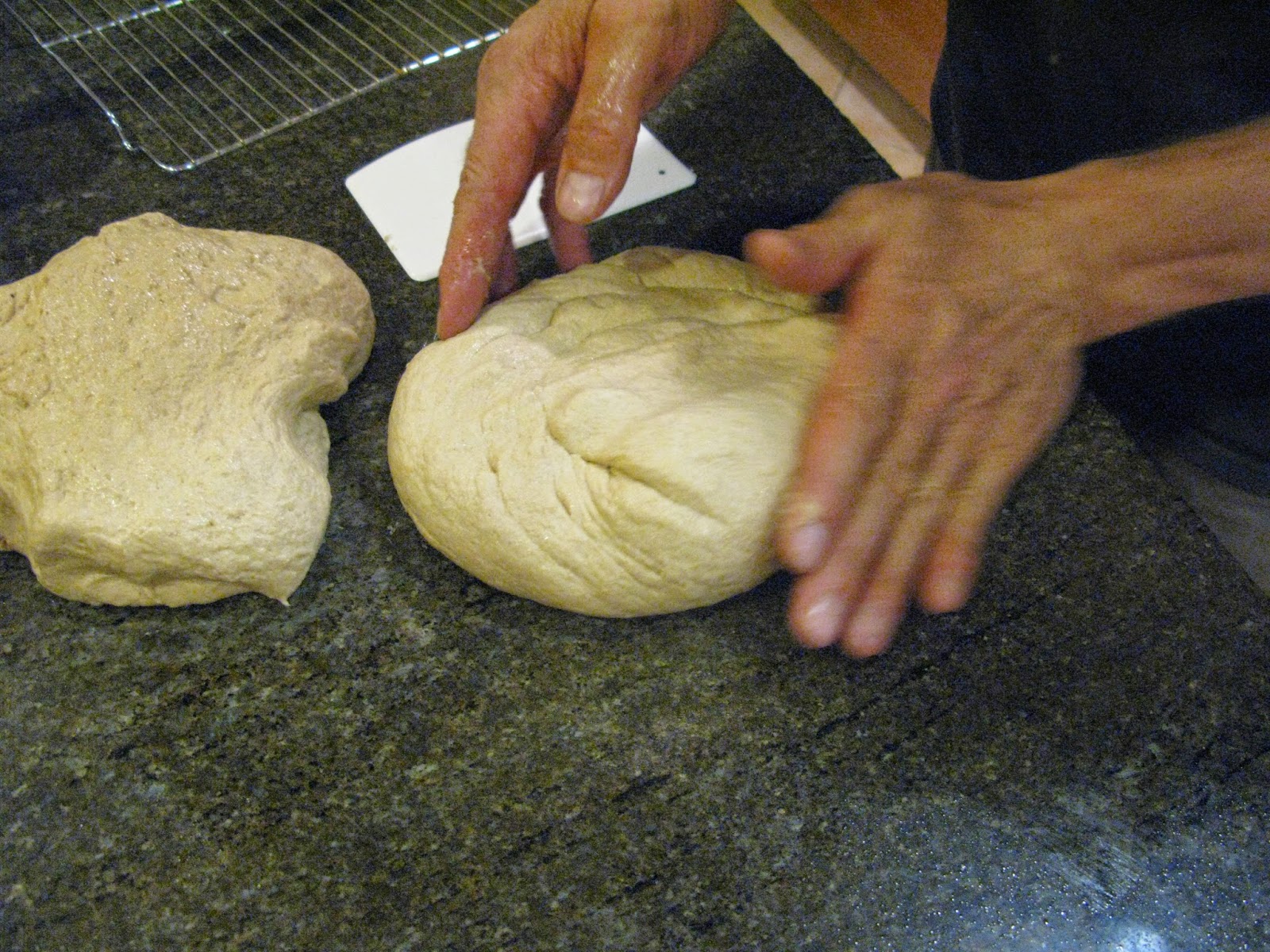 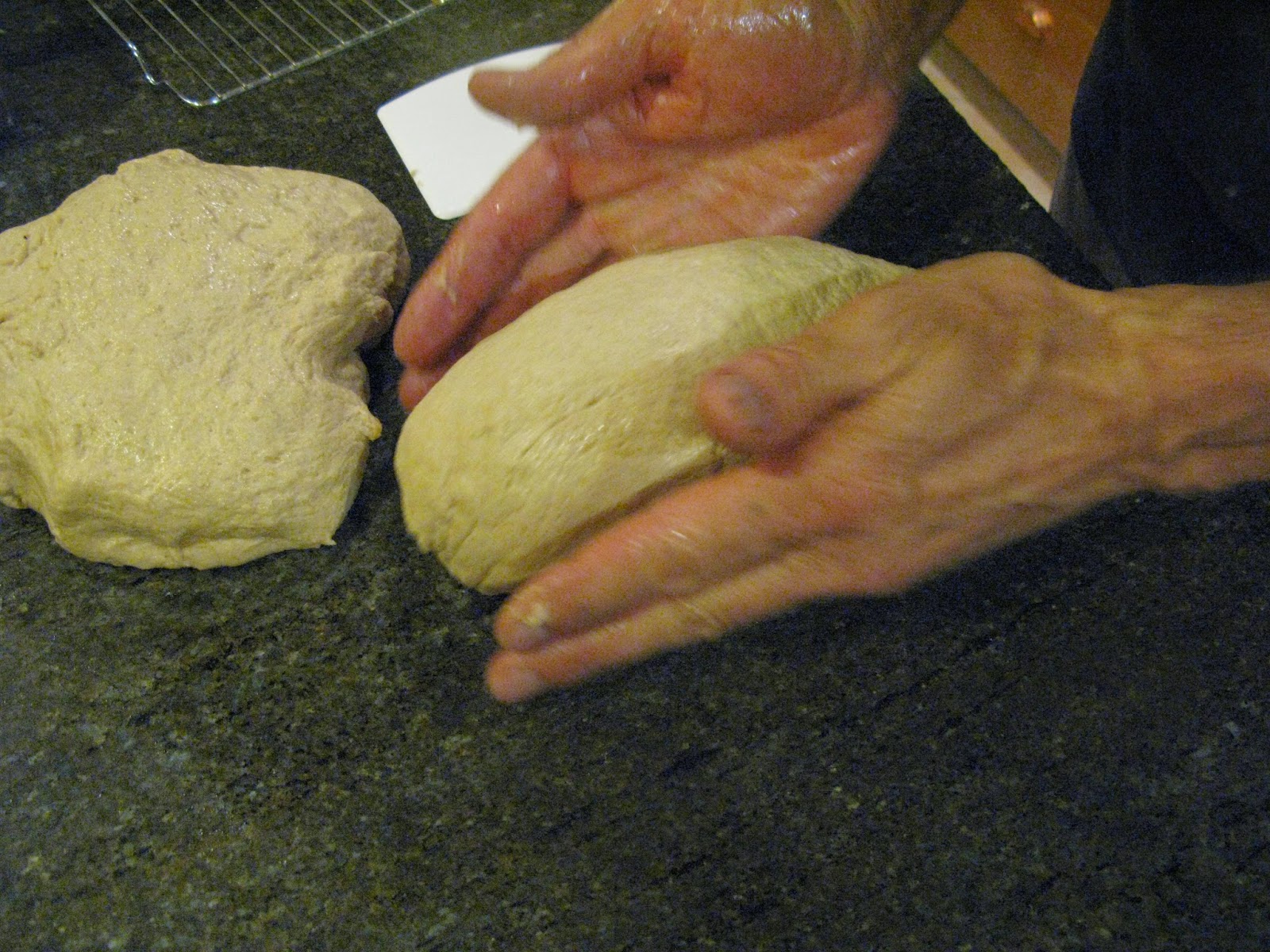 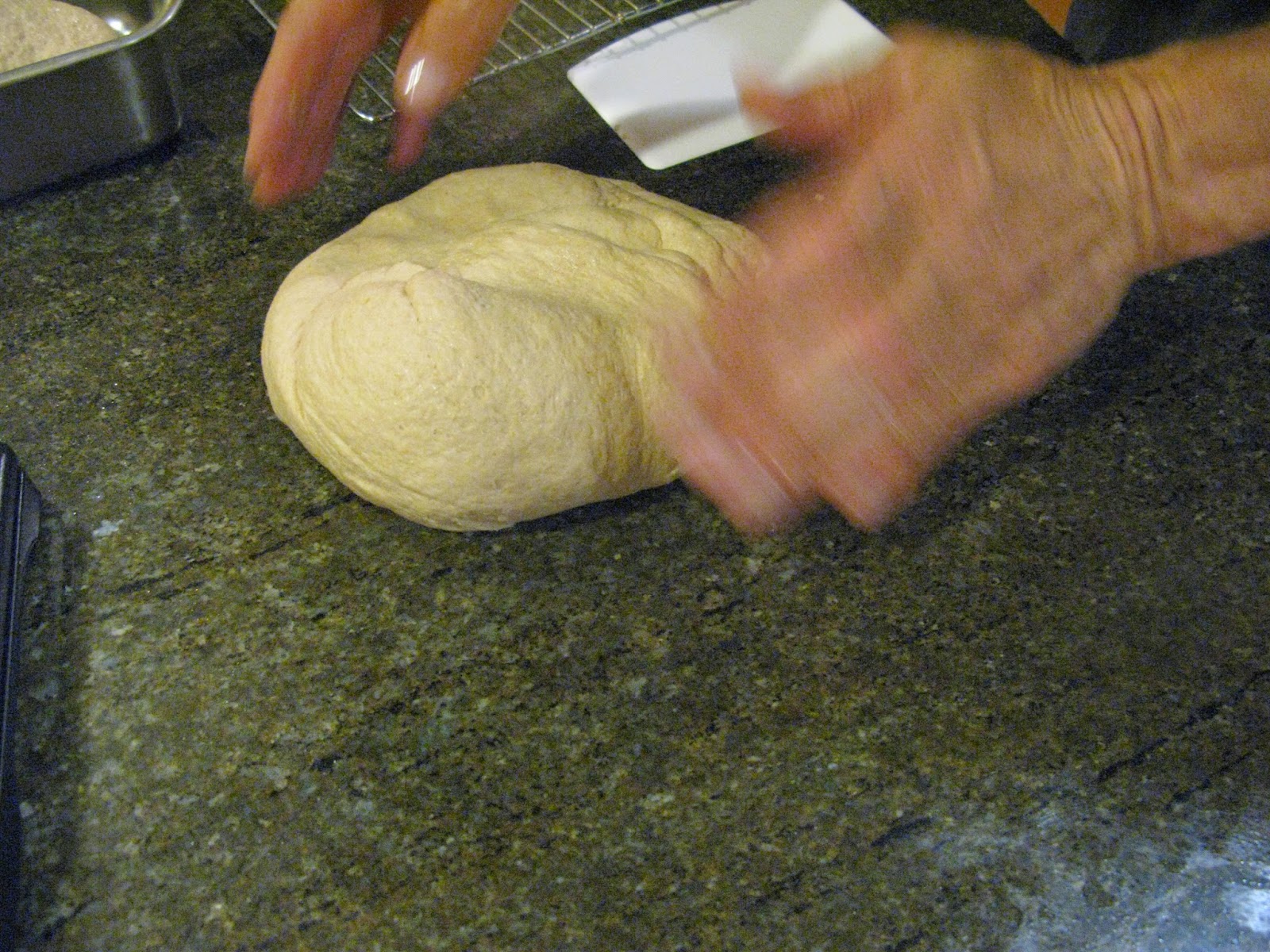 We placed them into two loaf pans. 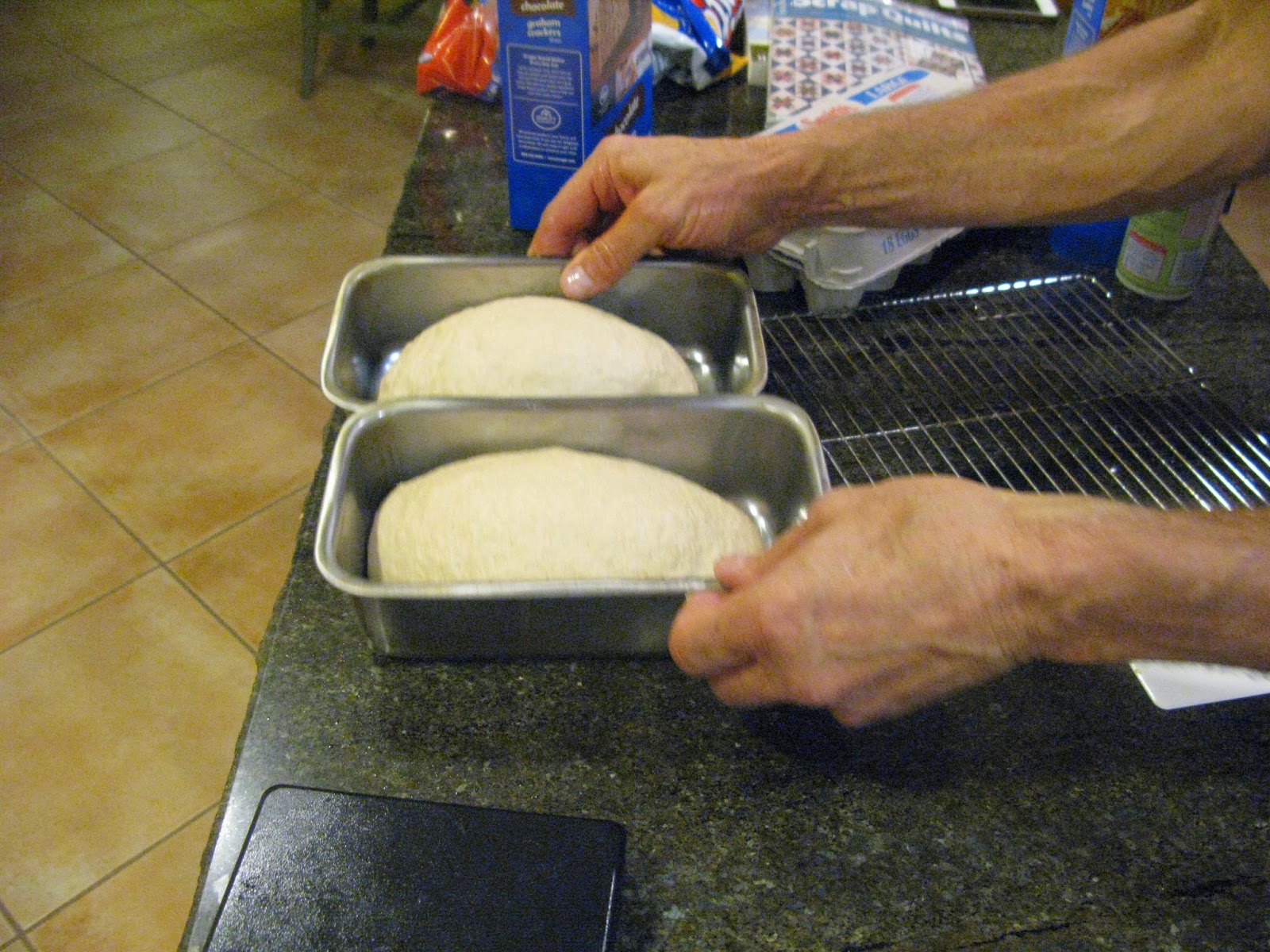 The dough needed to rise again until it had doubled in size.  What plump dough! 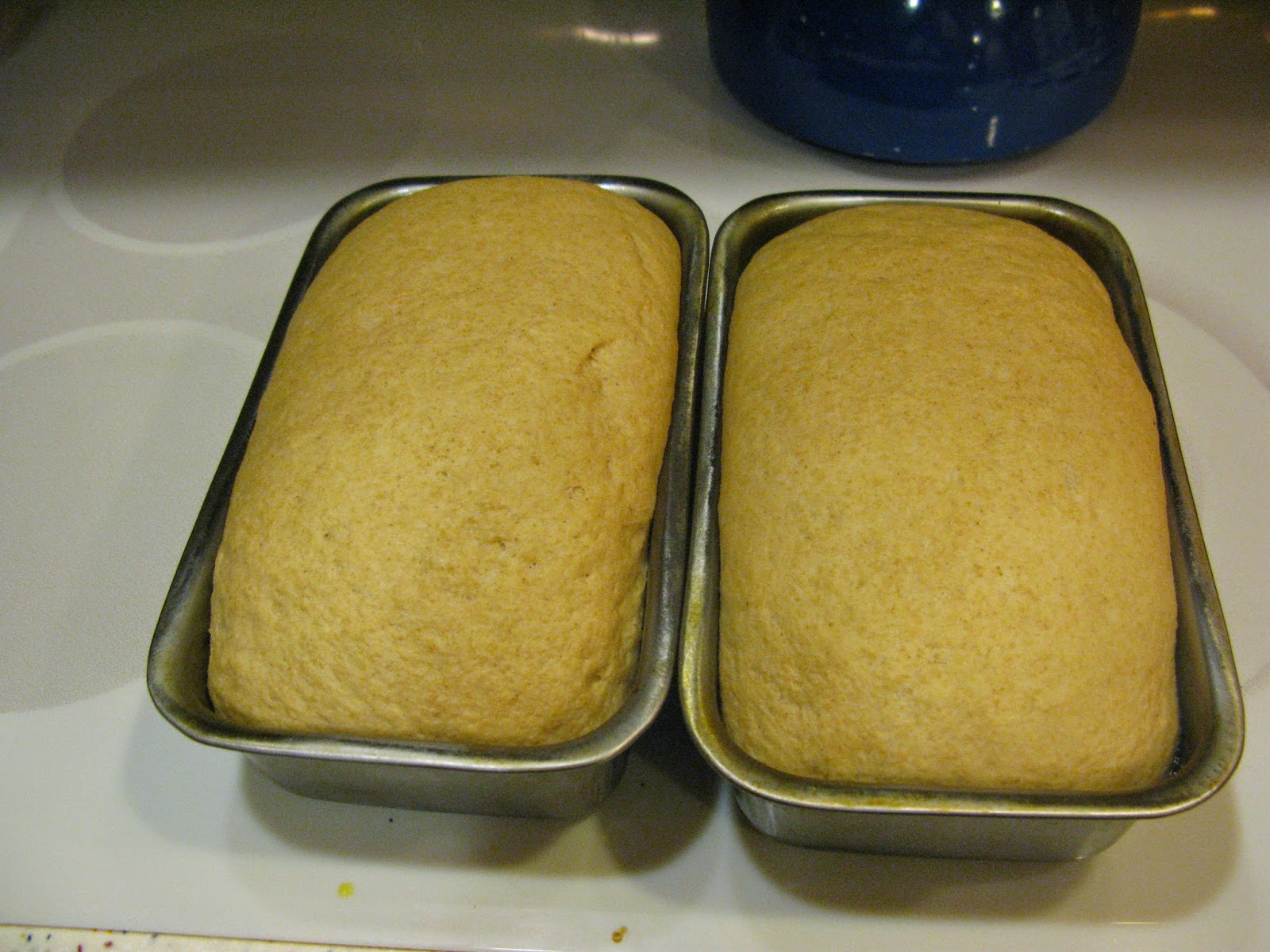 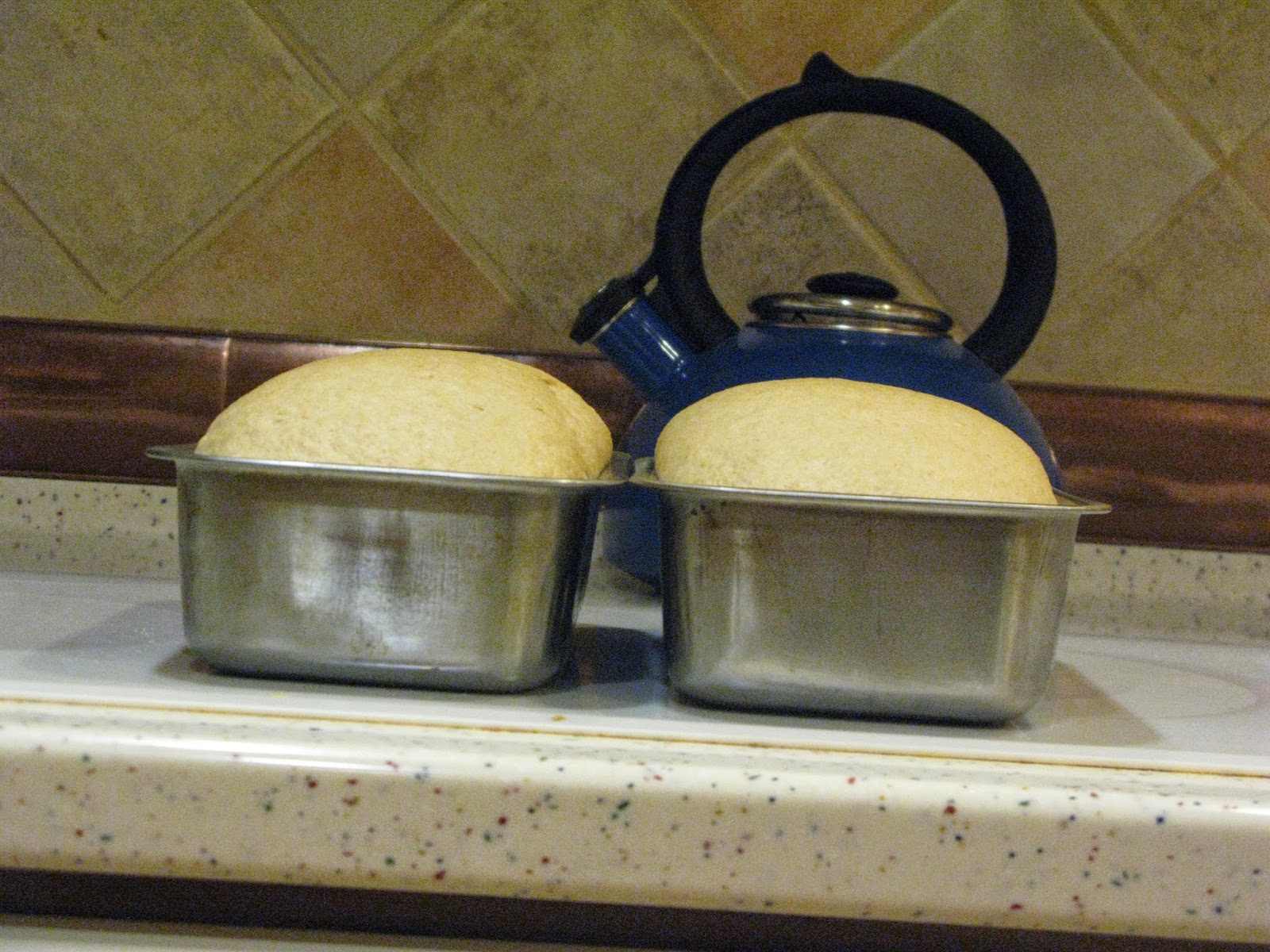 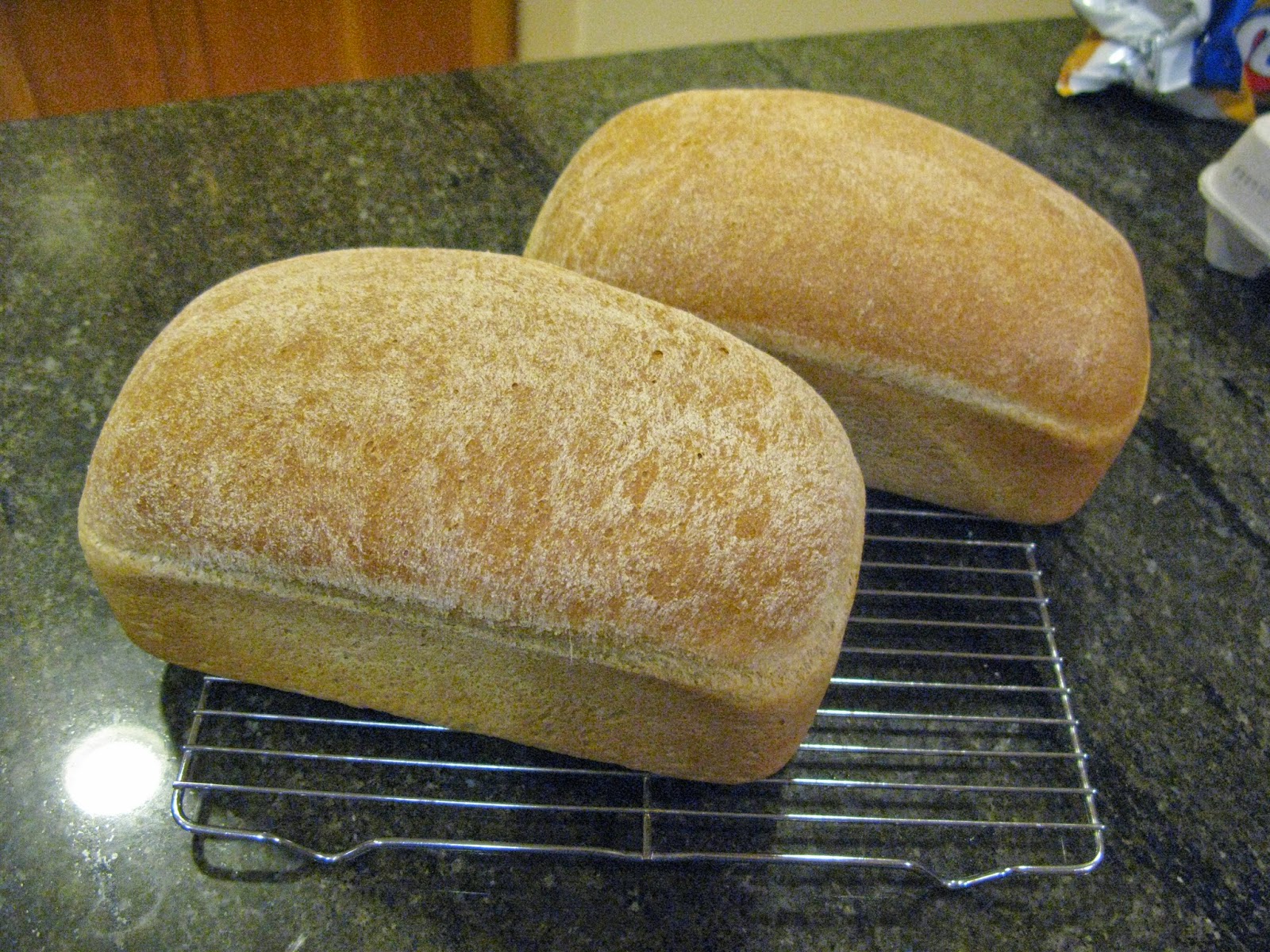 I am very impressed with these loafs!  The last time I made a loaf of wheat bread, the loaf was misshapen.  I didn't knead the bread well, and a big air bubble developed and exploded while the loaf was in the oven. 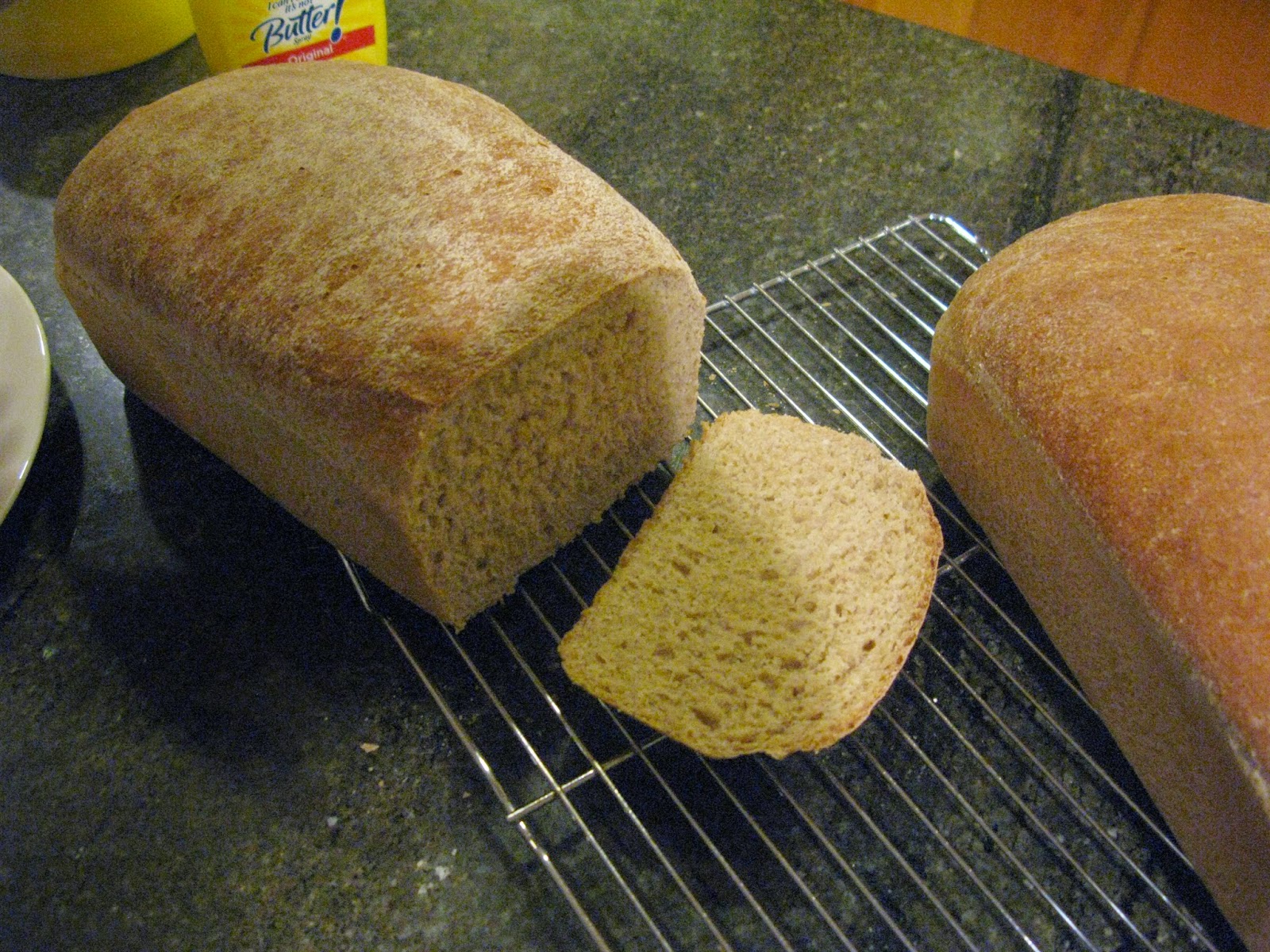 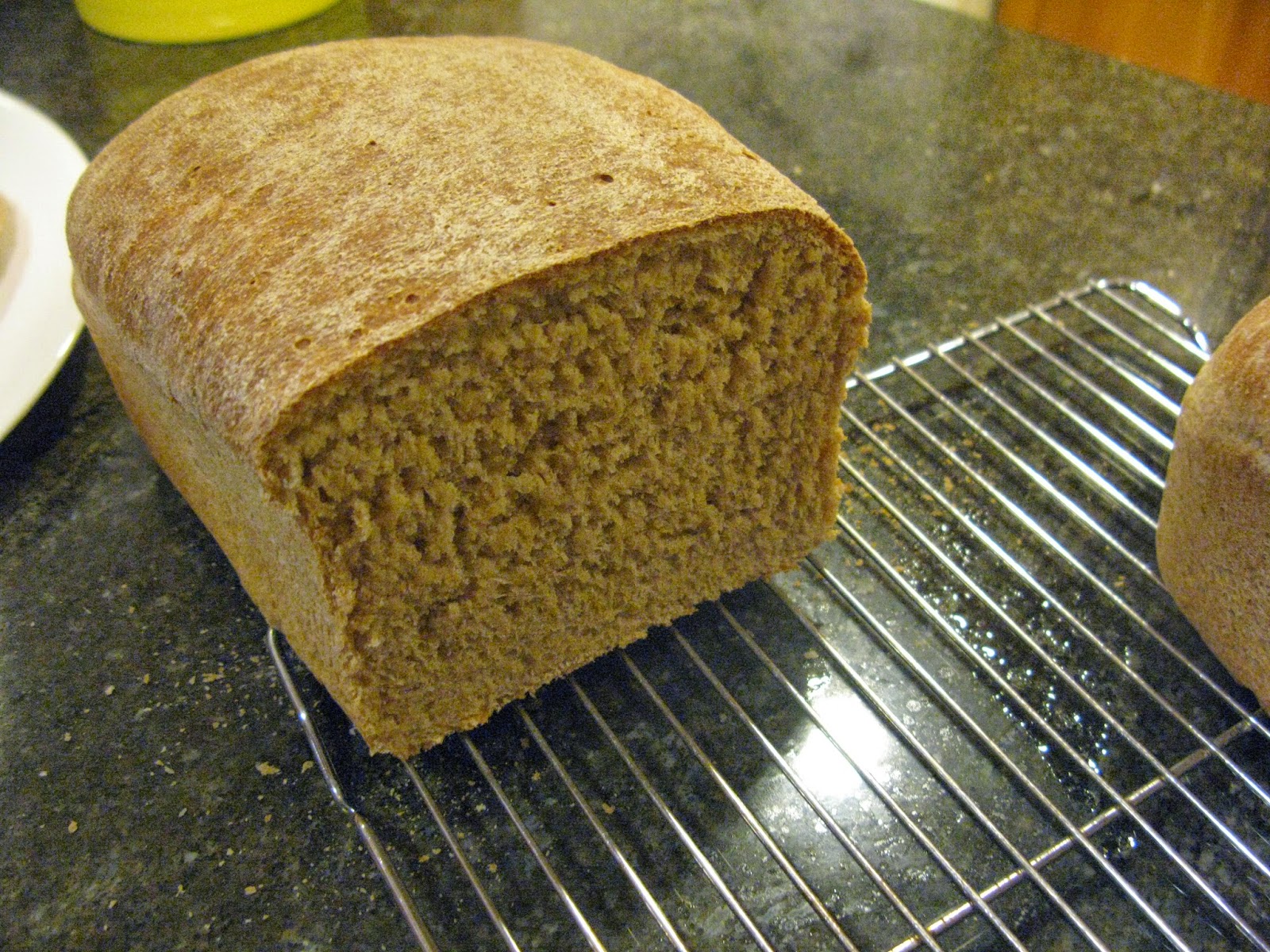 There is nothing as homey and comforting as fresh baked bread.  This recipe made soft and delicious bread.  We ate our slices with a healthy slathering of natural, un-pasturized honey from my dad's beehives. 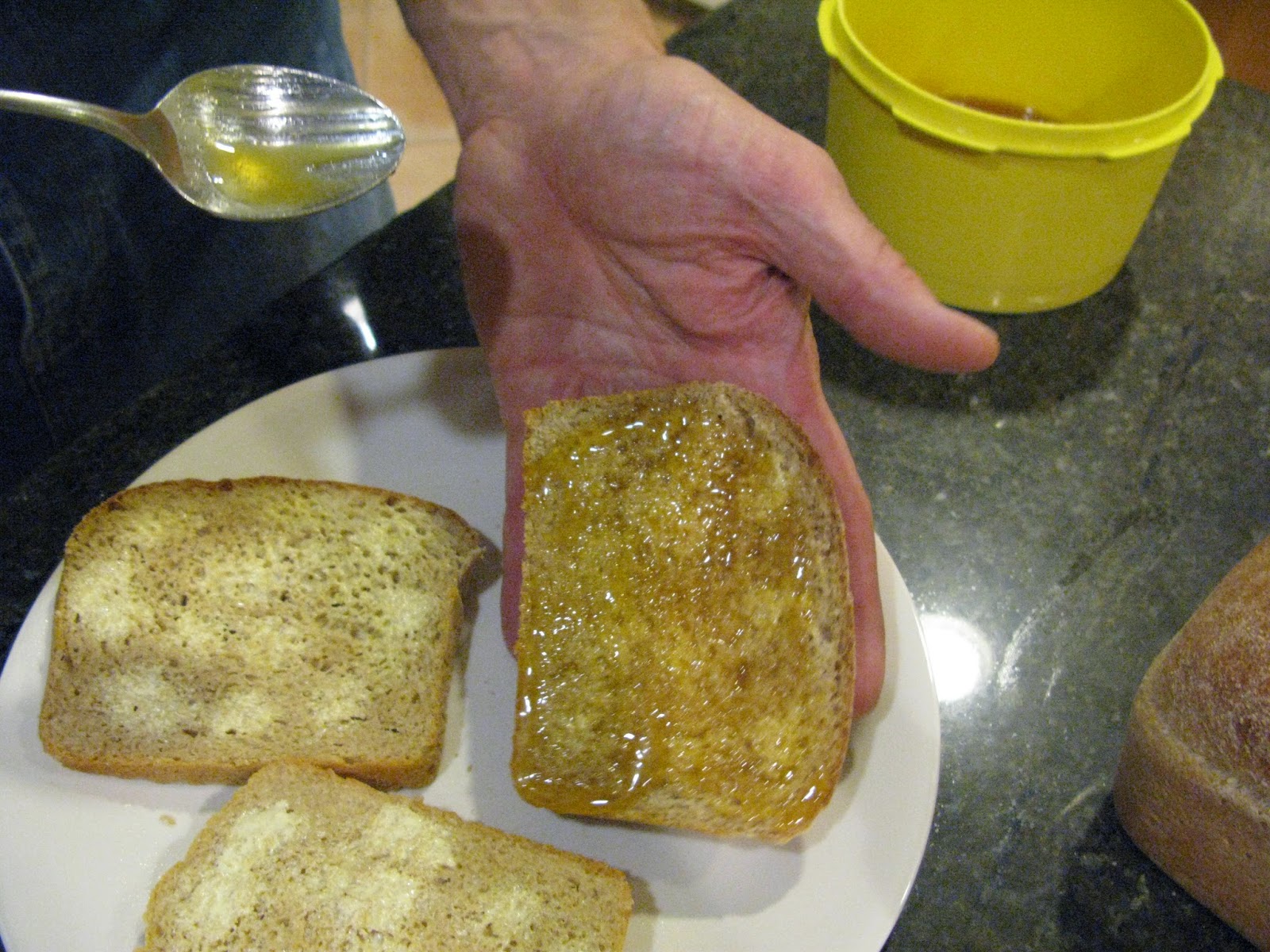 We couldn't stop eating this bread.  We ate well over half a loaf right after it came out of the oven.  Making bread can be time consuming, but it is well worth the effort. 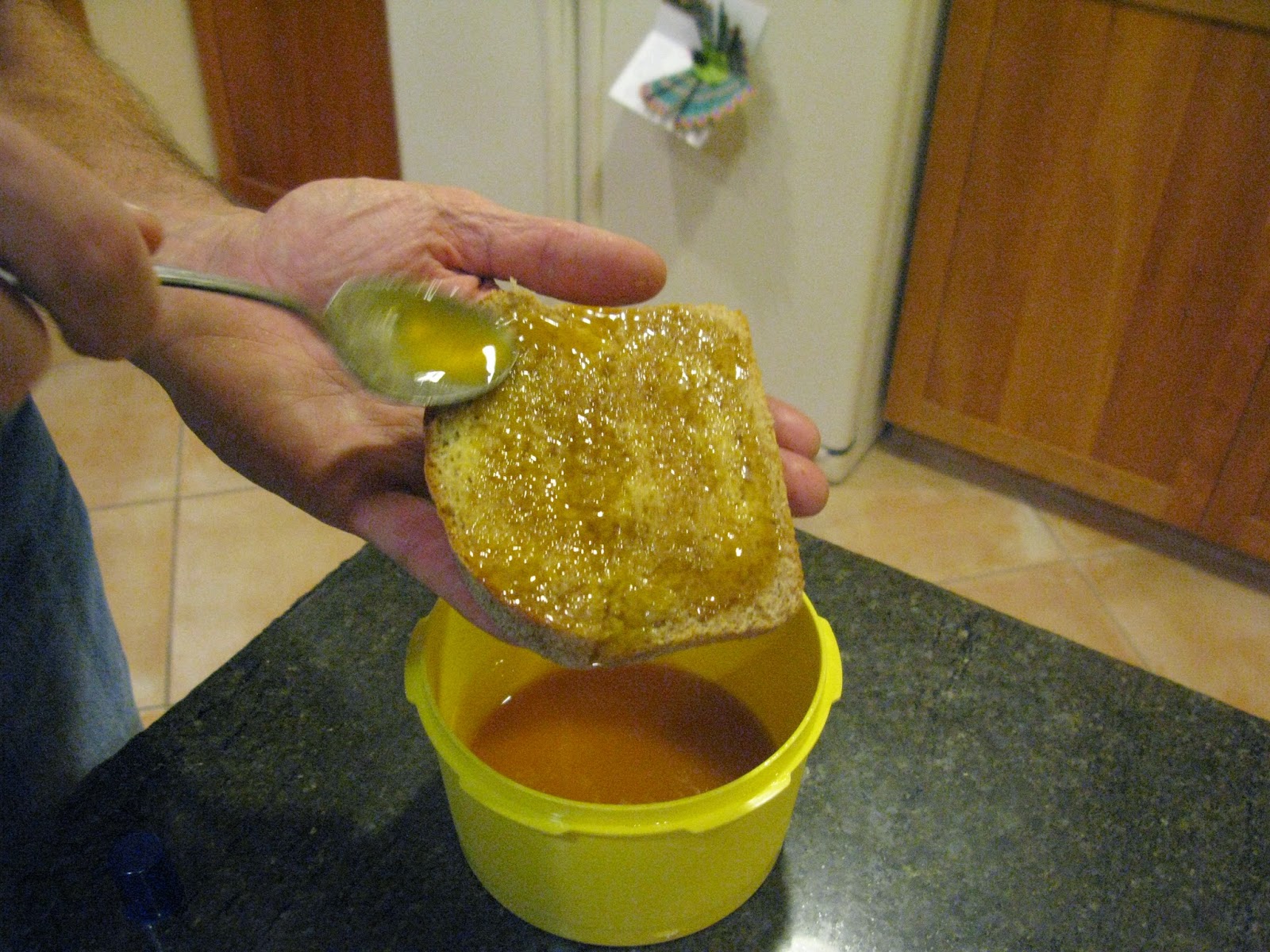 This is a great recipe.  My dad and brother use it on a weekly basis.  The results are consistent and toothsome.  This is one of my favorite recipes! 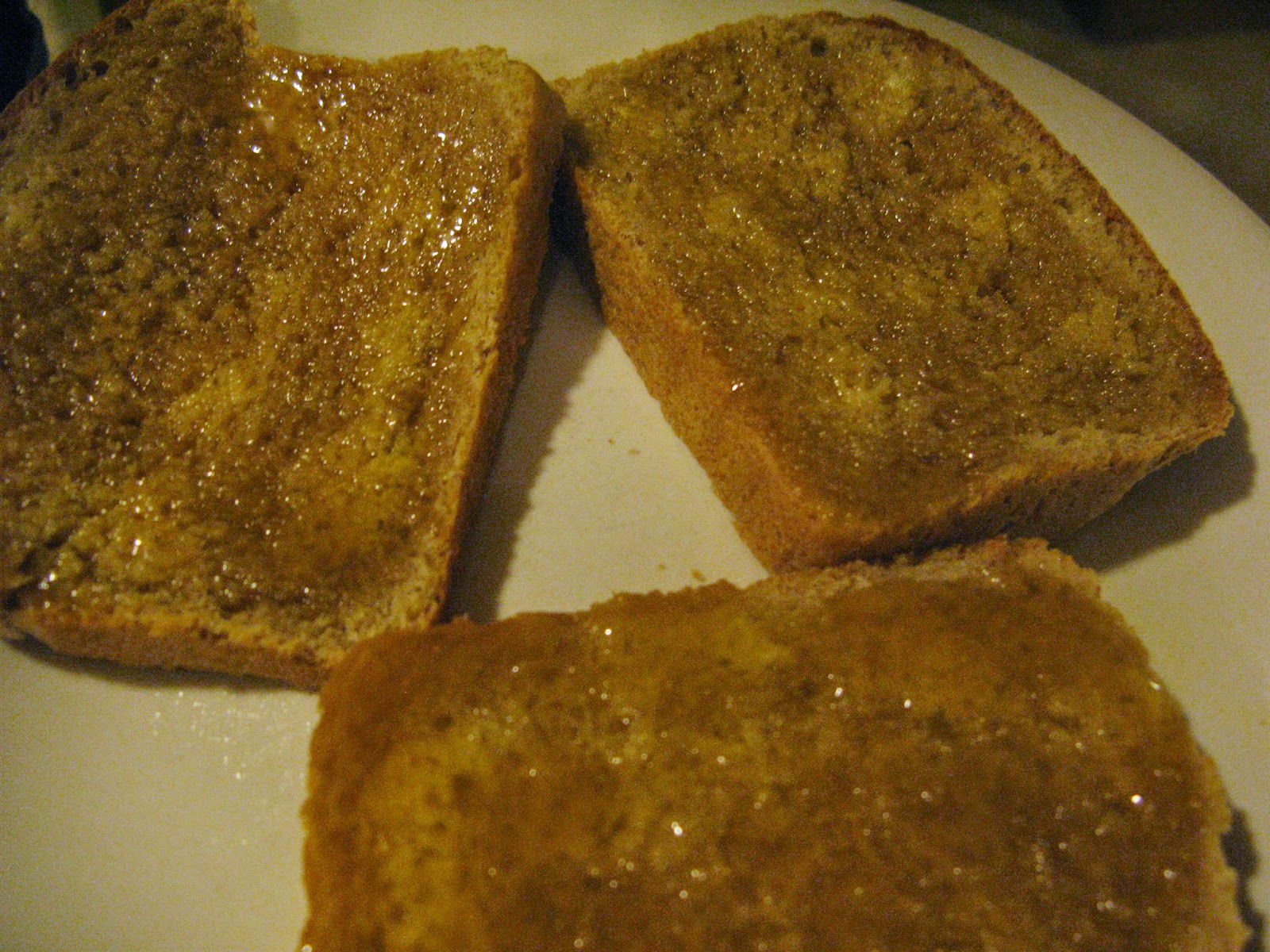 Oh my gosh! I love fresh baked bread! This recipe looks SO yummy!!