My brother recently told me how my dad once made us pancakes with bacon inside. I don't particularly remember this event, but it sounds delicious. I thought a way to improve on that idea would be to have a peanut butter based pancake or waffle. I was recently reunited with my long lost waffle maker, so I decided to whip up some peanut butter waffles with chunks of bacon. I used a peanut butter waffle recipe from Martha Stewart and just added cooked bacon.

The ingredients for this recipe are 1 ¾ cups all purpose flour, 2 tablespoons sugar, 2 teaspoons baking powder, 1 teaspoon baking soda, ½ teaspoon salt, ¼ cup butter, 6 tablespoons creamy peanut butter, 2 cups buttermilk, 2 large eggs, and 8 strips of bacon. I baked the bacon earlier for 11 minutes at 400 degrees Fahrenheit; It could have been a little crispier. I also substituted the buttermilk with two tablespoons of vinegar and two cups of regular milk. 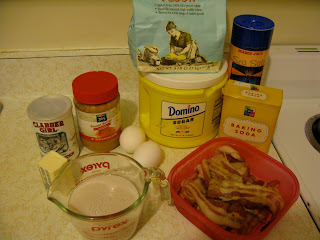 I added the flour, sugar, baking soda, baking powder, and salt into a bowl and whisked. 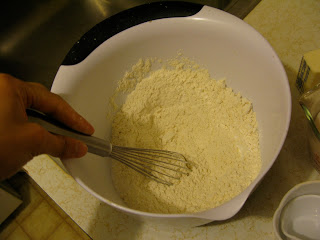 In another bowl, I melted the butter and whisked in the peanut butter, buttermilk, and eggs. Martha used a blender to combine her liquid ingredients, but alas, I live a simple, blender-less existence. 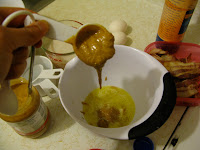 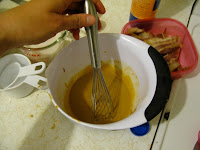 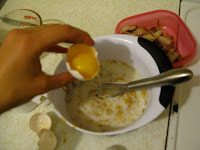 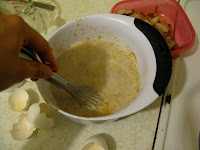 I added the bacon chunks and liquid mixture into the dry ingredients. I whisked until the lumps of flour had dissolved into the waffle batter. Don’t over mix! 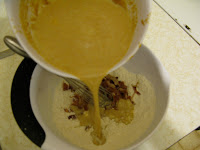 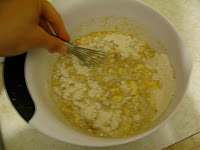 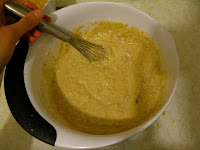 I greased the hot waffle iron with vegetable oil, but butter would work. The first time I didn’t grease, which was a mistake. I added ¼ cup of batter into each waffle square and cooked until brown and a little crispy. My google search taught me that you shouldn’t open the waffle machine until finished, otherwise it might pull the waffle apart. If your waffle maker’s timer is not reliable, the waffles are done when the steam stops spewing from your machine. 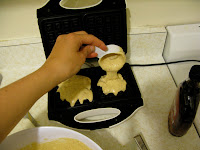 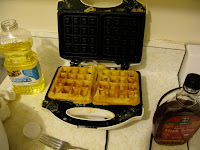 I ate the waffles slathered with pure maple syrup. When I was a child, I preferred the imitation stuff, but my father’s highbrow syrup preferences eventually wore off on me. I liked these waffles, but I prefer a strong peanut butter flavor. The crispy bacon bits were definitely a plus. I’ll probably add bacon chunks to regular buttermilk waffles in the future.

You’ll be happy to know I didn’t eat the entire batch of waffles in one sitting. I completely cooled the remaining waffles on a cooling rack and stored them in a Ziploc bag in the fridge. They can also be frozen. When I was ready for another succulent peanut butter bacon waffle, I toasted or put them in the microwave. 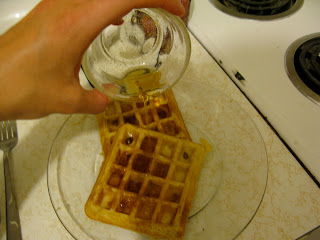 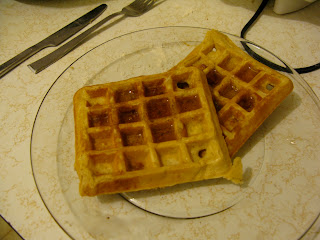 Um...yum! Anything with bacon makes it better. Might have to try these waffles this weekend. If you ever want to make ice cream might I suggest the recipe book Jeni's Splendid Ice Cream. Anything in that book is great.

I'll check it out! I assume you need an ice cream maker, but that is always a wise investment.