I have always had a strong affinity for squash.  My grandmother would serve roasted butternut-squash with brown sugar.   It was a decadent way to prepare a humble vegetable.  This dish is homey and sophisticated.  I used whole wheat rotini and low fat half-and-half so it's healthy as well.  A Martha Stewart recipe was my source of inspiration.

I don't have a picture of all the ingredients because I made this dish over a two day period.  I first made the butternut-squash sauce, and the following day I finished the dish by combining the sauce, cooked pasta, and asparagus.  The ingredients are 2 tablespoons fresh sage, 13 ounces rotini pasta, 8 ounces asparagus, 1 medium butternut-squash, 1 tablespoon extra virgin olive oil, 6 teaspoons minced garlic, 1 1/2 cups half-and-half, salt, pepper, and crushed walnuts.

Here is a naked squash.  I am glad I included this photo because I think it really helps clarify the whole process. 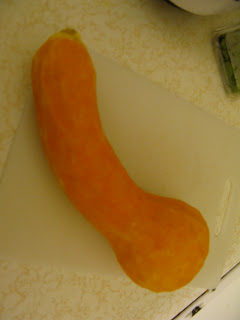 I pealed and cubed the squash into one inch squares.  I then cut 2 plump tablespoons of sage.  Besides being mentioned in a Simon and Garfunkel song, what do you know about sage?  Do you known its scientific name is salvia officinalis?  We use the grey-green leaves of the sage plant, which has blue or purple flowers.  Sage leaves are used in European dishes and were once thought to repel evil spirits.  During the Middle Ages it was used to keep the plague at bay. 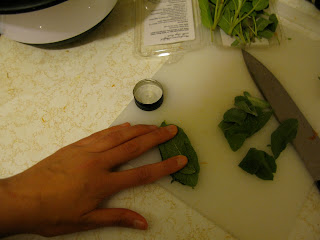 The cutting technique I am using is called a chiffonade.  To replicate this technique you must stack the leaves up and then roll them up.  Then you use a knife to thinly slice the rolled leaves. 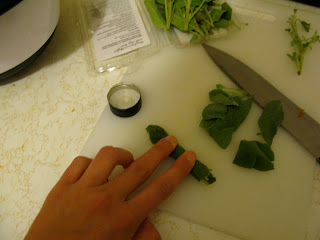 I added the extra virgin olive oil, sage, salt, and pepper to the cubed squash.  My clean hands throughly distributed the ingredients. 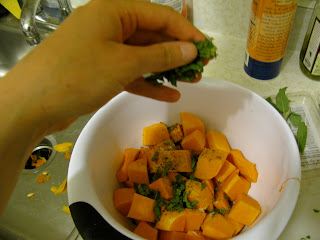 I am a big fan of this action shots.  Mid-pour shots make cooking appear so exciting.  I cooked the squash at 375 degrees for 40 minutes. 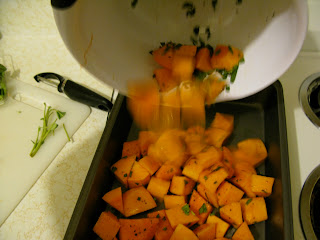 About midway through the cooking process, I realized I had forgotten to add the minced garlic.  I added the garlic and decided to stir the squash.  This probably helped the the squash cook more evenly. 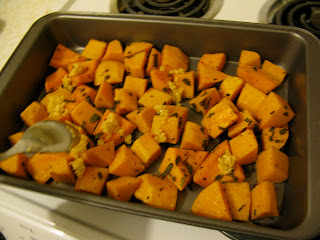 Martha Stewart suggests using a food processor to blend the half-and-half and squash.  I, alas, lack fancy cooking equipment.  I mashed the squash with a spoon.  This smelled very mouthwatering. 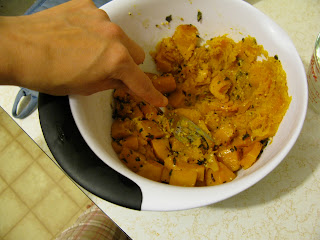 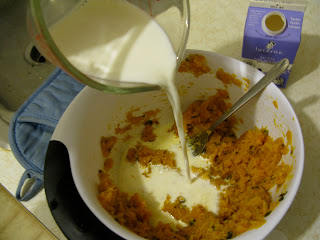 This doesn't look appealing, but it coalesced into a nice sauce with little effort.  This is where I finished the first day.  At this point, I poured the sauce into a tupperware. 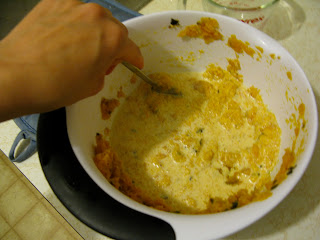 It was thick the next day so I added a little water to loosen things up.  If you had a food processor, the sauce would be creamer, but I didn't mind the texture in mine. 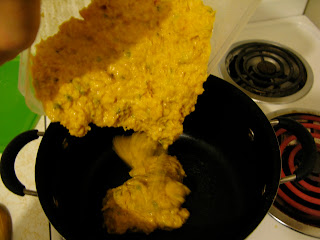 I added the asparagus, which I had cut into 2 inch spears, while the sauce was heating.  I used frozen asparagus because I am frugal. 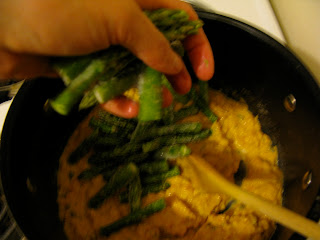 I used rotini, but any pasta would do.  This would be tasty with ravioli. 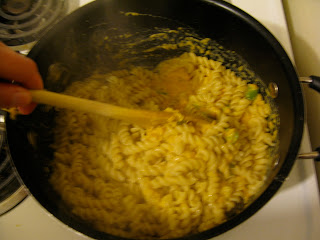 Two enthusiastic thumbs up!  The crunchy almonds and woody sage are wonderful partners to the creamy butternut-squash. 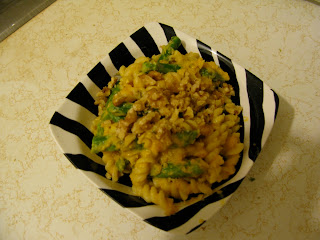