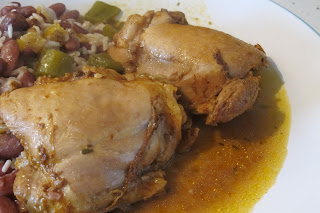 A couple of weeks ago, I went to Belize with some family members.  I had a wonderful time.  The scenery was breathtaking, and we did many fun and exciting activities.  One day we also went to Guatemala to see Tikal. 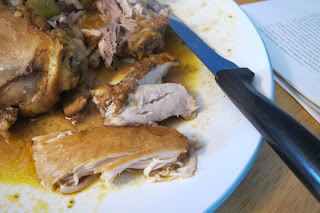 I was surprised at the many Mayan ruins sites in Belize.  I had always associated Mayan civilization with areas in Mexico and Guatemala.   In addition to the Mayan sited we visited, we also went zip lining, cave tubing, and snorkeling. 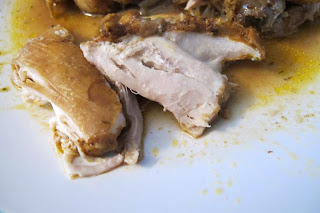 The coolest thing we did was explore a caved called Actun Tunichil Muknal.  Mayans sacrificed food and humans in the cave and many artifacts still remain.  It was incredible. 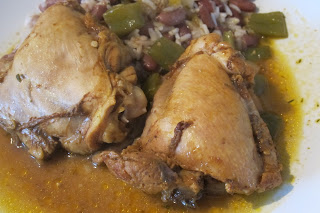 Through Wikipedia, I have learned that Belize has the lowest population density of any Central American country.  It has the second highest population growth rate in the region.  Spanish conquistadores explored Belize and claimed it for Spain, but they didn't colonize it lacked gold and other valued resources. 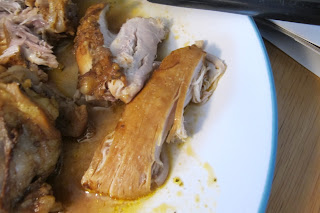 English and Scottish people came in the 17th and 18th century and established a thriving logwood trade.  The Spanish allowed the settlers to stay and trade logwood in exchange to an end of English piracy.  The Spanish attempted to reassert control a few times, but were unsuccessful. 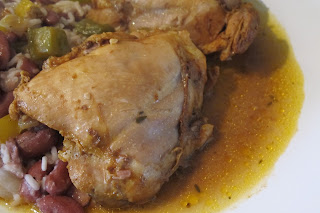 We ate many delicious dishes in Belize.  We had fried bread called fry jacks.  Almost every day we ate stew chicken with rice and beans.  It was a simple dish, but I enjoyed it immensely.   My wonderful sister in-law and brother gave me some recede, a spice, for my birthday, and so I decided I would try to make my own Belizean stewed chicken. 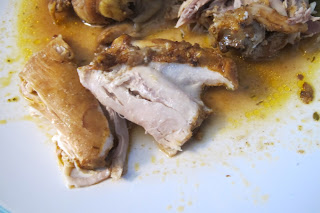 The stew chicken recipe came from food.com.   The recipe suggests using  whole chicken.  Instead I bought five pounds of bone-in chicken thighs.  This makes food for a crowed.  The recipe says it serves four to six, but I think six to eight is more accurate. 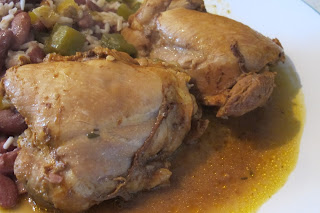 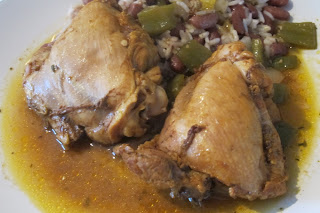 I mixed the recede and vinegar together.  I rubbed the paste all over the chicken thighs.

I added cumin, thyme, oregano, black pepper, Worcestershire, and soy sauce into the bowl with the chicken.  I stirred to evenly coat the chicken and set the bowl aside.

I melted the coconut oil in a large pot.  I added the sugar and stirred.

I sautéed the chopped onion, chopped green pepper, and garlic until the onion was translucent.

I added the chicken, marinade, and enough water to cover the chicken.

I added the two bay leaves and let the chicken simmer for 40 minutes.

I served the chicken with a rice and beans recipe I'll post in the near future. 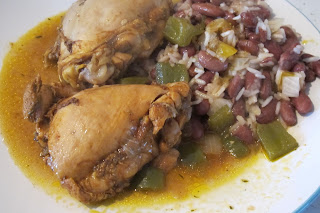 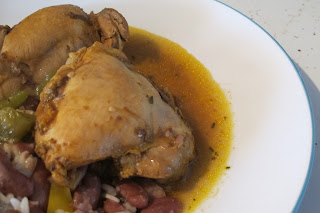 It was flavorful, savory, and succulent. 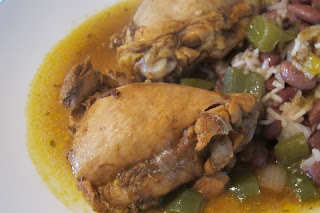 The spices were automatic and complex.  There were layers of flavors that blended and merged together. 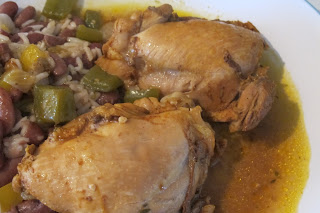 The dish looked simple, but scrumptious.

It was comforting, hearty, homey, and pleasurable.  I was very pleased with the results.  I think this chicken tasted as good as the stewed chicken I ate in Belize.  It was a successful baking adventure! 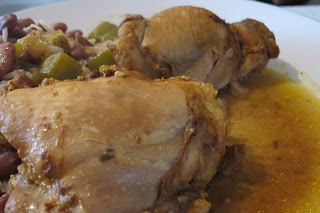 So good! I need to add this to my dinner menu.

Ashley, I think you should! :)