I have had a long love affair with scallion pancakes, or cong you bing (葱油饼). You can buy them on the street at breakfast time throughout China and Taiwan. They are delightful multi-layered, oily, and salty flat breads. When there is a cong you bing vendor in my neighborhood, it’s a happy occasion when I’m running late and have to pick some up for breakfast on the go. I would buy them by weight, and the vendor served the chunks of pancake in a plastic bag with a spear. The flavor more than made up for the lack in elegance.

You can find them occasionally in the freezer section at groceries stores. I recently found a package of frozen scallion pancakes at a Korean grocery store in Maryland, but that was a rare find. There are several recipes on line, but I used one from Saveur.

The recipe that I am sharing is my second attempt. The first time, the dough was so stiff, it was almost impossible to knead. I also felt the dough was too salty, which is saying a lot because I love salt. The second time I made it I reduced the flour by ½ of a cup and reduced the salt by half. 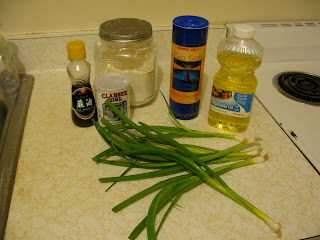 The process is a little laborious, and I am not sure if some steps are necessary. I began by putting 1 and ¾ cups of flour into two bowls. In one bowl, I added the baking soda. I split the salt between the two bowls. 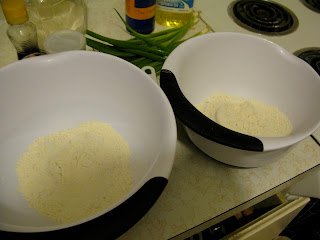 I added 2/3 cup of cold water to the bowl with the baking powder. 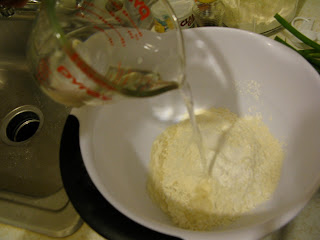 I mixed the dough with my hands until the dough came together in a ball. 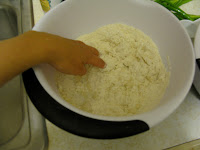 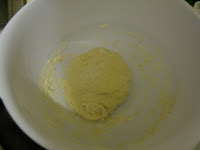 In the second bowl of flour I added 2/3 cup of boiling water. I mixed the hot dough together until it formed a ball. I then mixed these two dough clumps together. Why is all this necessary? I have no idea, but I do what I’m told. I then kneaded the dough for 4 minutes. This is one thick dough. It didn’t require any additional flour to prevent it from sticking to my hands or table. 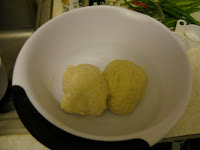 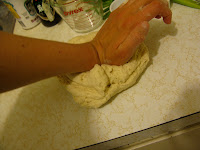 I oiled the kneaded dough and let it rest for two hours. This doesn’t have yeast, so it isn’t going to rise. Why does dough without yeast need to rest? Letting dough rest, give time for the gluten to relax, which helps the pancake be more tender and less chewy. Letting the dough rest also helps break down the starch in the dough and distributes the liquid equally in the dough. All of these things improve the texture of the final product.

Once it had rested, I divided it into two pieces. I flattened each piece into a 20 by 10 inch square. I pushed, pulled and stretch the dough with my hands to form a square, but the recipe suggests using a rolling pin. I poured a tablespoon of oil on each square and spread it out evenly. I then sprinkled ¾ cup of scallions on each square. 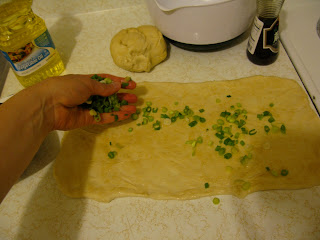 I rolled the square together like a cinnamon roll. Roll starting on one of the 20 inch edges. 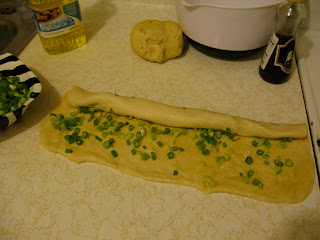 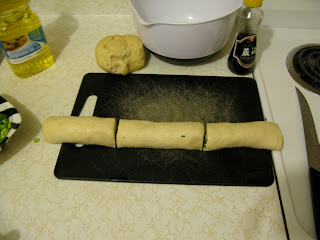 I stretched the pieces out a little more and then roll them into a flat disk. At the end I tucked the end of the log into the disk near the start of the roll. This made a round glob. This probably sounds very confusing, so look carefully at the pictures. 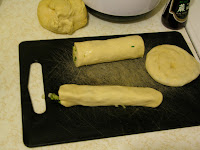 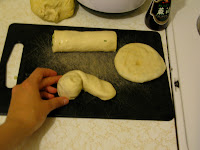 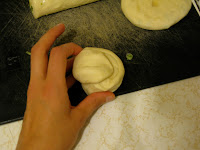 I flattened the dough into flat pancakes.  The recipe suggests a 5 inch diameter pancake. I made them into several diameters, and thinner is better. A 1/8 inch thickness is ideal. 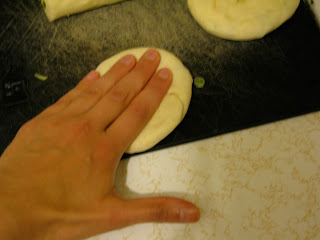 I added 2 teaspoons of vegetable oil into a hot pan. When the oil was hot, I fried each side of the cake until golden brown. This will take a few minutes. After each scallion pancake was finished, I replenished the oil in the pan. 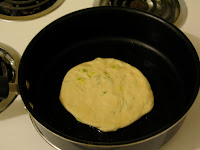 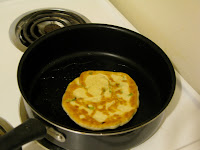 I ended up sprinkling the hot pancakes with additional salt because it didn’t seem salty enough. I’m hard to please. Next time I make these, I’ll add the entire tablespoon of salt and see how it tastes.

These were delightful, but I think I used a little less oil then the vendors, which negatively impacted the flavor and crispiness. Nonetheless, they were flaky, salty, and savory. I’m definitely going to make these regularly. They are one of my favorite foods. You could add red chili flakes with the scallions or sprinkle sesame seed onto the raw pancakes right before frying them. 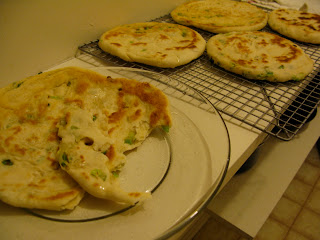